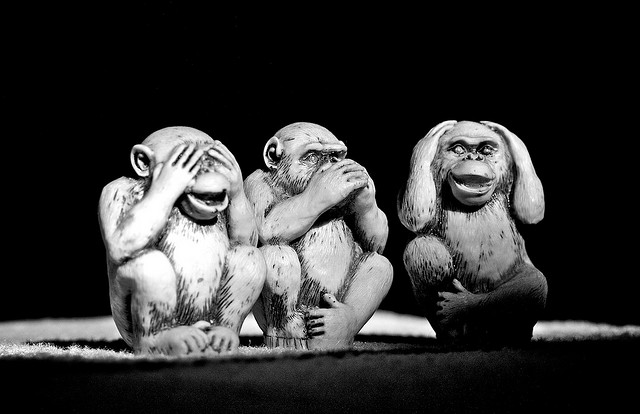 TUNING OUT, OR, HOW I LEARNED THAT IGNORANCE MIGHT LEAD TO BLISS 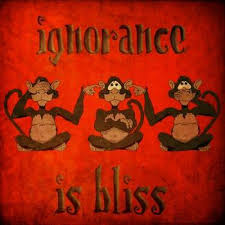 Can ignorance be bliss?  For the last several decades, I was a news junkie.  I prided myself in keeping up with the latest news, be it from NPR, The NY Times, PBS, The New Yorker, or any other progressive media outlet.

When in conversation, if people “got” my news references, I’d give them a positive ranking for being  informed.  If they looked blankly at me, or openly admitted that they didn’t follow the news, I would give them an automatic downgrade.

Now I am rethinking the role of ignorance as an essential self protective device for maintaining sanity in a crazy world.

During political campaigns decades ago, I could be counted on to call strangers while phone banking, to walk unknown neighborhoods and to write letters in support of causes and candidates I backed. During the 60′ and 70’s I’d eagerly join in demonstrations. I telephoned for Eugene McCarthy between breast feedings.

In the 1980’s I sat for hours, with supporting materials, at a table in front of the post office in order to engage uninterested people in understanding the importance of voting for the Nuclear Freeze.  I regularly gathered people together in my living room to talk about the urgency of living in a world Beyond War.  I was on a mission. Each day offered an opportunity to save the world from destruction. But, after several years of activism, I burned out.  Our collective efforts did help bring about change, but somehow the issues seemed simpler then. The fervor with which we worked was difficult to sustain.

At some point, my penchant for political activism ebbed.

I continue to keep myself relatively well-informed, but no longer have the energy or desire to work for a specific cause.  Crisis Fatigue has set in. Climate change, refugees, Syria, gun control, Isis or Isil, droughts, the Mideast, mass shootings, idiots running for president, Iraq, Iran, Afghanistan, the Taliban, fracking, oil spills, bee declines, etc.etc.etc.; all my internal warning lights flash “OVERLOAD!”

It’s obvious that some crises are cynically hyped, if not openly manufactured, to drive listeners, voters  and sales.  After the selling of the first Iraq War, I began to feel loathing for most talking heads as well as many news anchors and politicians. By the beginning of the second Iraq War, my distaste was complete.  I’d lost my taste for most causes.

Maybe, in the beginning,  it was ignorance that allowed me  to believe that I/we could continue to effect change in our complex world?

One of the joys of traveling to Japan is that I can shut out the drumbeat of crises more easily than I can at home.  I’ve found it pleasant to “tune out” for a while.  To my surprise, the world goes on, with or without me.  My semi-detached state of mind continues now , even after I’ve returned home.

Because of the language barrier I have in Japan, I cannot understand what their politicians or media talk about.

And, at least for now, I’m liking it!