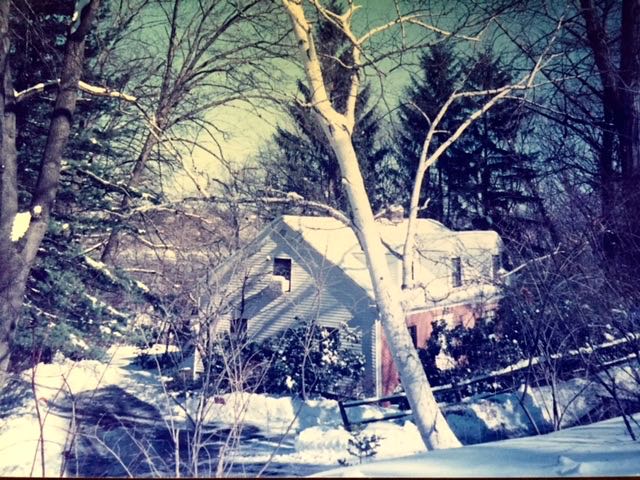 Where we love is home – home that our feet may leave, but not our hearts.
Oliver Wendell Holmes –

As my parents aged,I had to face the fact that my beloved childhood home would not remain in our family for long.  I dreaded the day I would leave it for the last time.

Now, I keep a photograph of my childhood home in my office  My eyes return to it lovingly every day.  I look at each outside window in the photo and can recreate the look and feel of each room within.

Our 1950 Cape Cod style house was built in the middle of a pretty steep hill that went all the way down to the Connecticut River. Deep woods covered adjacent land.  White birch trees were lovely exclamation points. It was a gentle and protective landscape. 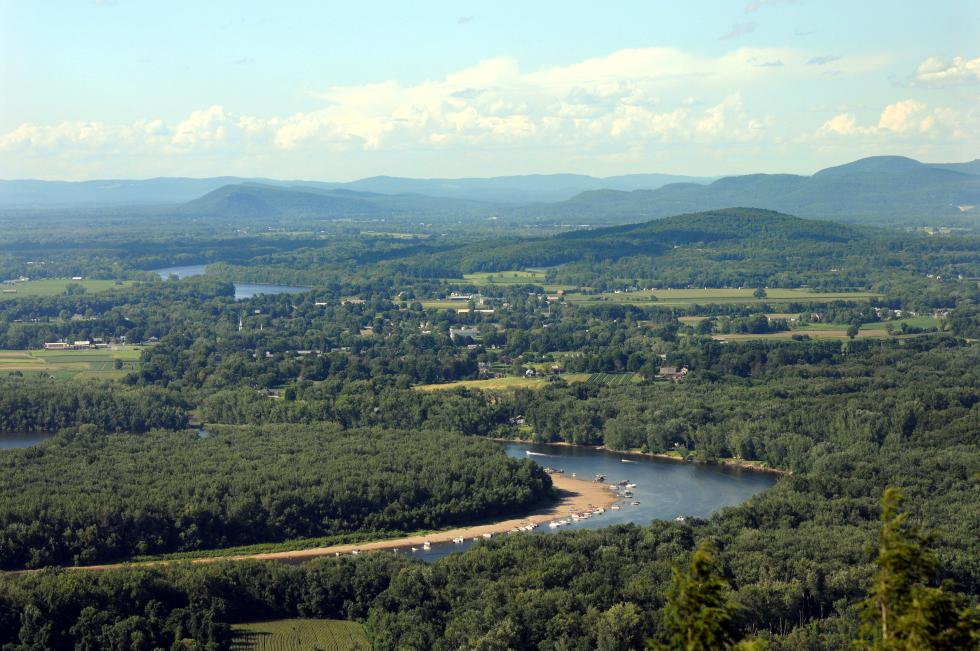 My life there was strongly influenced by the seasons. The adjacent woods were home to many migrating birds, who yearly, would announce the arrival of spring. Their enchanting songs awakened me each morning. As the days shortened, loud rhythmic chirp of crickets would announce the approach of autumn. Summers were lush, exploding with greens and patches of colorful wild flowers. The growing season is short in New England and living things made the most of every non frozen day. Winters were mostly grim, too long and very cold. On really cold winters, we’d watch the Connecticut River freeze over, then flood during an early thaw. Occasional snowstorms transformed the landscape as only snow can do.

When it snowed, our street light produced a magical display, lighting up the snow crystals as they made their dizzying, dancing, way to earth.Winters became a lot more interesting for me when snow was in the forecast. My parents would  park our car on the street on top of our hilly driveway so that everyone could get out in the morning. If a storm hit that wasn’t expected. I’d awaken to the noise of my Dad’s delivery truck, struggling mightily to get up the slippery and treacherous driveway slope. It usually took several tries before he was finally able to make it to round the top of the driveway.  We’d stand watching indoors, holding our breath as he neared the top of the hill, only to have to roll down again, pour out some more sand on the snow, rev up the engine again and give it another try.  Ultimately, he always got out.

The den in my house was, above all else, cozy.  It was paneled in dark stained wood from the trees on our property. It had a small fake fireplace.  The focus of the room was the tv, which was my Dad’s pride and joy. These were the earlier years of television, with little selection and often poor, snowy reception.  No matter.  Whenever he could, Dad would rope me into watching a tv western with him.  If he wasn’t watching a Western, he was usually behind a newspaper, except when it became necessary to take a trip to the kitchen to dish out a bowl of ice cream for himself.  Conversations in that room were limited.  Nightly,Dad would fall asleep in his lounge chair with the tv on, long after the rest of the family had gone up to bed. I can still hear my mother calling him to turn off the tv and come upstairs.

Our small eat -in kitchen was paneled in knotty pine. My Mom painted the kitchen ceiling a cheerful red to match the cheerful red formica counter tops.  We ate meals in the kitchen unless it was a special occasion, in which case, we’d move into the formal dining room.  Dinner was a steady diet of  broiled meat, baked potato and a cooked frozen Bird’s eye vegetable. Rotisserie roast beef and chicken were other standbys. Since my mom worked, dinner had to be prepared quickly.  We switched out to fresh vegetables during the summer when local farms provided outstanding tomatoes and corn for a brief treasured few weeks.  Canned applesauce and jello were year round mainstays. I’m not sure why.

In my young mind, our dining room was beautiful. The windows looked out on the adjacent woods. In the winter, through the large picture window, you could see the winding Connecticut River carving its way through the rural landscape.  White grasscloth covered the walls, a formal table with 8 queen Anne chairs, seats upholstered in pink leather, took up most of the space..  The requisite breakfront held  our “good” dishes.  A few Victorian glass antiques sat regally on the chests of drawers that held the “good” tablecloths, the sterling silver, the candles and all the other requisites for fine middle class dining. 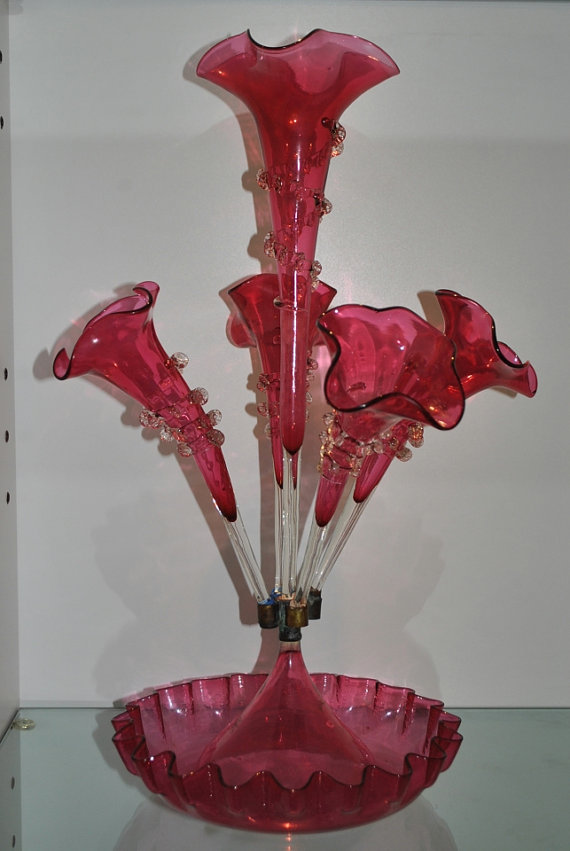 Summer times brought us all outside for meals  as soon as the weather was warm enough.We ate either on the back deck or on the screened porch, depending on the number of diners. Sunday suppers, after his Sunday golf game, Dad held forth at the grill with a gin and tonic in one hand, and a steak in the other. Extended family and mosquitoes vied for space around our large picnic table.  Overflowing  baskets  of impatiens along the back deck railings, added lively color to the scene. We’d linger outside, light citronella candles, as evening would turn into night.

The living room remained off-limits for the most part, unless there was a party or we had company visiting. It had white grasscloth walls, and a very large curved sofa upholstered in white.  A white shag carpet stretched wall to wall.  Curtains were put up in the winter and religiously taken down when the weather warmed up. Boldly flowered slipcovers were put on for the summer and removed in the winter. My Mom was an expert at seasonal transformation.

I loved my all pink bedroom. I slept in a twin bed that had a painted pink headboard with a hand painted flowered garland with my name in the middle of it.  There were two matching pink chests of drawers and a dressing table as well.   My bedroom was always painted pink. the ceiling too. By the time I left for college, I was over pink.   Much to my satisfaction, my bedroom was about 3 times the size of my brother’s. Another distinct advantage I relished  was the control of the air conditioner, which was shared by both rooms.  My brother often complained that the air conditioner should be on, but I liked to sleep with the windows open.  Hey, you take your victories where you find them, even if they might mean that you’ll be a little uncomfortable. 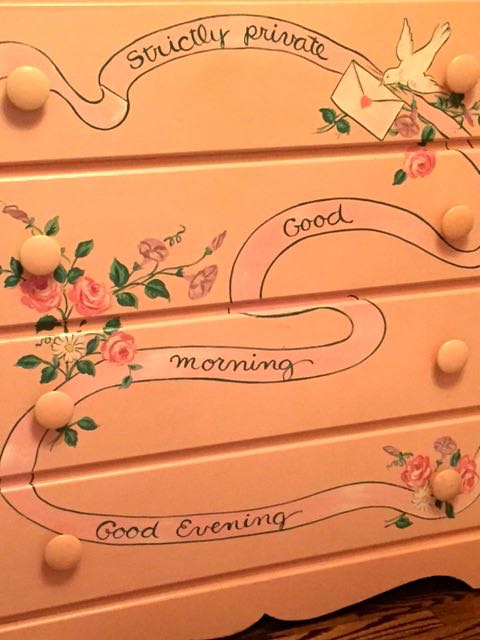 The house also had a” playroom” in the front part of the cellar.  It had a built-in bar and was perfect for my parent’s New Years Eve parties as well as for my high school graduation party, held surreptitiously, when my parents were out-of-town. The other side of the basement scared the hell out of me, because once, when I was downstairs, the furnace door blew off.  I wasn’t hurt, but the memory of that incident remained strong.  It required great courage for me to venture down those cellar stairs alone.  Adding to the fear factor, there was a windowed back door into the cellar, which could provide easy entry for anyone wanting to break in or hide out for a while.  In my imagination, someone could be lurking in the darkness just waiting to pounce when I came down the stairs.

I also knew fear and anxiety in that house, probably because  it was in my nature and our house was a bit isolated. For many years, I was afraid of a house fire, sure that I would be trapped in my upstairs bedroom with no viable exit route.   I compulsively checked under my bed skirt each night before I went to bed, to make sure no evil man was waiting to attack.  I also went through a period of being afraid of the “evil eye.”  I can’t tell you what that meant, although I’m sure Freud could have found an explanation.  It did make it necessary, for my own piece of mind, to tack down the side edges of the window shade by my bed, so no one could see in.  When I  baby sat my younger brother, I would try to find ways to induce him to stay awake as long as possible, usually to no avail.  I was left listening alone to the many inexplicable sounds of the house and the night.  I’d finally get into bed and then turn on my radio loud enough so that it canceled out noises that would alarm me. I was always flooded with a sense of relief when I heard my parents voices.

As my parents aged, the maintenance of the house deteriorated.  Once my Mom became seriously ill with Alzheimer’s, its downhill slide accelerated.  Things that needed fixing got fixed as poorly and cheaply as possible, once my father was in charge. Poor man was overwhelmed.  Grime and stains accumulated.The house seemed like a shrunken shell of its former self. It became increasingly painful for me to go home. Sometimes on trips home, I’d devote hours in a futile attempt to clean it up.  It was past redemption. Ultimately the time arrived to move my Dad into a retirement home and put the house up for sale. It was an exhausting ordeal to go through everything, but one that I quickly felt detached from. Our lives there had ended. My kids took only a few things and I found, strangely enough, that I didn’t want much either.  Its time in my life had passed and there was no going back. It was actually a relief.  What remained, minus my parents, was just “stuff.”  I kept a few of my mom’s loved treasures, but to this day, they’re still wrapped up on a high shelf in my closet.

I was able to walk away without a tear shed. It felt like closing the cover of a much-loved book. It was over.  I soon realized that I’d internalized it all.  Anytime, I want to return, it’s all still here, I just have to look in the window.