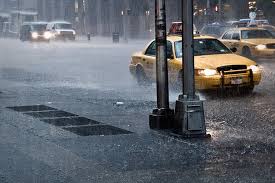 The driver became agitated as soon as I told him I wanted to go to Brooklyn.  He began shouting at in me in an accent that was initially difficult to understand.  I knew drivers didn’t like to go to Brooklyn, but this level of anger was new to me.  He waved a wad of money in his right hand as he turned around while driving to announce that he would take me to Brooklyn, but only if I agreed that he could stop first at a bank downtown to make a deposit .  He repeatedly kept saying he couldn’t afford to pay a $40 late fee and that he had no time to waste.  If it hadn’t been pouring, I would have gotten out of the taxi then and there, but I was inside a dry vehicle that would otherwise be unattainable under the current weather and made me reluctant to move on.  Besides, I was tired.

He continued his rant, speaking far too loudly and far too rapidly.  I did not want to engage him in conversation, I just tried to assure him that we had enough time to make his deposit before 3pm when the $40 late fee would be charged. I wanted him to calm down. The traffic did its inevitable snarl as we made our way south on Park Avenue. 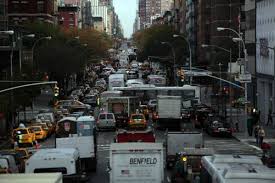 The theme of the conversation slowly shifted . He wanted to let me know how difficult it was for him to make any money driving a cab.  He became increasingly upset.  I told him that I understood how hard it must be, be he immediately countered that no, I didn’t understand!  He shouted that people think he must be stupid because he drives a cab, but he is not stupid, only acting that way because it makes his life easier. As we inched our way towards the bank, he went on to tell me about $90 tickets he had to pay for driving in the wrong lane. Then noting our situation, he added that it was impossible to make any money because traffic in the city moved so slowly. I kept agreeing, but it did little to help him regain his composure or assuage my nagging concern that I’d gotten myself into something I shouldn’t have.
I again considered asking him to let me off, realizing it was probably in the best interests of both of us, but I just didn’t have the energy to make a move.  His driving seemed ok, which was a big plus to stay put. Now,  about 15 minutes into the ride,  it began to feel a bit like a cool adventure and I was curious to see where it would all lead. I felt as if I was watching a a tv movie that could descend into dangerous territory at anytime, yet I also began to feel as if  I was ethically obliged to help him, maybe to show him that some people do care???

As we ultimately got closer to the downtown bank he needed, I asked him how he planned to make his transaction. After all, this was Manhattan.  No drive up windows here.   We had begun to have a bit of a dialogue, by now.  He’d figured out that he would find a parking spot, then shut off the meter. The plan called  for me to remain in the taxi, moving to the front seat so as to guard the cab from being stolen, as well as to guard his stuff.  Was their a gun in his stuff?  I was getting in deeper.  He told me he was from Haiti and the payment was to repay a student loan.  He had me now.  He added knowingly that cabs can easily become prey for thieves if they’re not guarded. I seemed like an unlikely candidate as a choice for a guard in NYC, but I guess he was desperate.
As we made our final approach to the bank, he looked at me and asked me why I appeared worried. Suddenly he seemed concerned with my welfare, or at least how it might impact him.   I told him I wasn’t so sure as to how his plans would work out, or as to my role in holding down the “fort.” He was undeterred and now that we were near the bank seemed  less anxious than he’d been a little earlier.  Of course, he was unable to find a parking space, so he quickly parked the cab illegally at a sharp angle in front of a mail box.  He insisted that I move to the driver’s front seat, but that seemed too weird to me.  I told him I’d only sit in the passenger seat, which he accepted.
The bank was across a very wide street. The driver told me he’d put on his emergency lights and leave the car running.  He promised to be back in two minutes.  I added a suggestion that he close all the windows first, making me feel slightly less vulnerable.  I had heard a story from another driver just that morning about being robbed at gunpoint. I wondered what I would do if someone spotted me with the intention of robbing the cab. For a fleeting minute, I realized another option I had would be to just drive away. But, where?  Never did I think of abandoning the cab. I started to reassure him, as if I were his coach.  I told him everything would be ok and even suggested that he take a deep breath. He could count on me to play my part. He departed.
There I sat as a most unlikely guardian.  I locked the doors as soon as he left.  Minutes passed and my imagination went into overdrive.  Maybe he was robbing the bank and I would become his unwitting accomplice?  An updated Bonnie & Clyde?

At last I heard a knock on the window.  He’d returned from the bank. I quickly assessed that no one was chasing him and I heard no alarms or sirens.   I told him, ok, you can relax now.  As I was about to return to the rear passenger’s seat, he told me that I should stay in the front. I guess I’d become an ally.   Not wanting to offend him, I remained.  He was calmer now, but still shouting.  I decided  since the bank stint had been cool , it was time to learn more about him.

We talked like old friends all the way to Brooklyn. He quieted down dramatically. I learned he’d left Haiti 28 years ago, gotten a master’s degree in microbiology, got very sick for 6 months after working in a hospital lab, then went to medical school in Belgium where there were “terrible people” and “terrible things happened.”  He’d left medical school because of the the “terrible things” and came back to NYC.  He had no family and was working to pay off old school loans.  He seemed eager to make a change but was at a loss as to how to do it or where to go.
He displayed a broad knowledge of medicine and labs, but no longer wanted anything to do with the medical profession.    He had clearly lost his way and he was most likely suffering from mental illness or substance abuse..  From where I sat, I didn’t think it would end well. Sadly, there was nothing I felt I could do, but pay my fare and give him a generous tip, and wish him well.
My random encounter left me a bit shaken.  When I related the story to my family, they couldn’t understand why I had remained in the cab with that driver.  It was something, that to this day, I can’t fully explain.

Here’s to the Ladies Who Lunch

My History of Eating, Part One

Are You City or Country???