The Revenge of the Firefly Squid

Firefly squid.  Just think how much fun life could be if your first name was “Firefly.”  Firefly Vapnek sounds very interesting, don’t you think?  I think the name “Firefly”initially influenced how I felt about eating these small creatures.  Fireflies are beautiful; to be caught, enjoyed and valued as a seasonal treat.

I’d never heard of firefly squid until we traveled to Ishikawa Prefecture in Japan for a self guided tour of the Noto Peninsula.  From what I’ve learned since our visit, they have spectacular bioluminescent properties in the water, glowing a pulsating electric blue as they congregate in the spring to mate. This is the time of year they become targets for the fishermen and for the mouths of eager Japanese.

The squid made its first appearance in my life as part of a set menu at a famous sushi restaurant in Kanazawa. I’d had several cups of sake before the grinning chef put the squirming little guys on a small platter before us.  I watched and videoed as the chef separated and cooked them on a hot rock in front of us.  I was equally fascinated and horrified, but the world of fish is ruled by the maxim of eat or be eaten.  I wouldn’t have been at a sushi restaurant if I believed the catching, cooking and eating of fish and other ocean creatures was unethical.  In case you missed the- not -for -the -squeamish- or -animal -rights -activists video on my facebook page, here it is:

Unfortunately, my firefly squid encounters continued for several days.  They were on every set dinner menu that was presented to us at ryokans we visited.  I ate them raw, as tempura, then preserved in vinegar. I went from initial curiosity to decidedly-less-than -happy to see them reappear on my plate, but I managed to eat them with no problem, especially since I try to fit into my adopted country. But, the squid had started to be a running joke for me and my husband.

Until they appeared at my breakfast table! 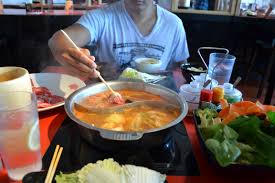 This time, they were served as an ingredient of shabu-shabu.  They were to be placed and cooked in a pot of boiling broth, along with other, more savory ingredients. I cooked most of the vegetables first, but ultimately I was faced with the remaining squid. I gamely put it into the sizzling pot.

All went ok until I tried to remove the squid from the broth.  It unexpectedly split in two as I tried to extract it, literally spilling its red guts into the broth.  My usually calm and appreciative demeanor while eating Japanese food vanished abruptly. I watched  in horror as the simmering both, which you’re supposed to drink after all ingredients have been cooked in it,  slowly turned pink and pinker. Breakfast was now over.

Yuck!!! was quickly followed by, “This is disgusting, I can’t even look at this anymore!”  My husband was amused.  I was not. I quickly covered the remaining uneaten squid with a small bowl, so that I didn’t have to see it.  I was forever done with eating firefly squid.

I won’t be changing my name to “firefly” anytime soon.