We’d been on the road for a few hours when hunger began to gnaw at our bones again and a bathroom break was in demand.  There were no restaurants that we could see on this remote stretch of the Noto Penninsula, least of all a comfort station.

Suddenly, as if a mirage had appeared, we spied a giant structure that had a small sign in front of it with the universal fork and knife symbol, signifying that this would be a place to find lunch and other amenities.  It looked like a big hotel, but seemed strangely of place in this location.

It turned out to be a giant structure that provided a gym, cafeteria and huge swimming pool where older folks from the local countryside came to exercise,socialize and grab a bite to eat . They looked at us oddly as we entered, asking us to remove our shoes, then politely showing us the direction of the cafeteria.   We required help ordering our lunch from a machine, then settled down to wait for our food, trying to look as if we belonged and hadn’t just landed from outer space.  Most people didn’t pay a lot of attention to us, although we were clearly the outsiders.

After ordering, my husband departed to use the bathroom facilities.  He seemed to be gone a long time. Soon, I began to wonder if he’d somehow gotten lost in this large building.

Suddenly, a woman from the front desk shouted out someone’s name in alarm, then ran high speed across the large lobby to get them.  The two wasted no time and ran off together back across the lobby.  I thought maybe one of the elderly people in the gym had gotten injured, or perhaps worse.

I continued to wait for my husband to reappear.  Finally,  he appeared with a very sheepish grin on his face. I began to put 2 + 2 together.

The Japanese toilet systems all differ a little bit in terms of how to use their flushing mechanisms.  Some flush automatically, others flush by waving your hand in front of a sensor, others have an old fashioned flusher and some are activated from an elaborate panel where you initially do a fair amount of guessing about what each symbol means.  It’s often a challenging yet amusing game of hide and seek. 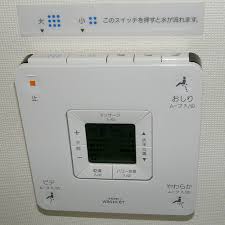 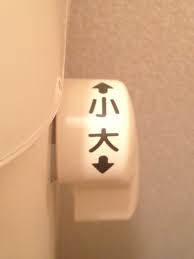 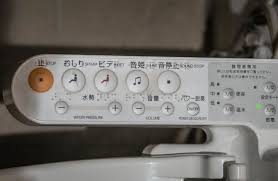 When my husband gets frustrated while working on a computer, he’s met with some past success by just pushing a number of buttons until he randomly selects the right one.  Unable to locate the method of flushing the toilet in this bathroom, he took to pushing buttons and accidentally activated the emergency call button.  He said he immediately recognized his mistake, but it was too late.  He thought that if he hurried, he might get out of there before anyone identified him as the culprit.

Unfortunately, just as he was emerging from the men’s room, the two workers rushed in, prepared for God-knows-what.

I think they instantly understood what had happened as my husband greeted them, turning his palms up in another universal symbol,  hopefully recognized as “busted!”

We ate our lunch quietly and left trying not to appear too conspicuous.