Don’t Fly with Me

By Dianne VapnekJuly 24, 2016No Comments

For many years,  I was truly terrified of flying,  particularly if there was a threat of turbulent air.  If it became turbulent during a flight, I’d initially scan the faces of the flight attendants, to determine if they showed any fear. Surprisingly, they never did, even when instructed by the pilot to remain seated.  Suspicious of their equanimity, I’d then convince myself they knew they were being watched, so their composure was all an act. I’d continue to observe them for any signs of a breakdown. One time, after a rough patch of air, I did overhear an alarming conversation between flight attendants, “Today’s my birthday,” one told the other.  “I’ll sure as hell never forget this flight as long as I live!” Aha!  The truth revealed.  Maybe my terror was an appropriate response.

I’d also silently assess the attendants’ perceived competence to empty a plane and save my life in the event of an emergency evacuation.  Using  gross assessments, I’d generally count most of them out.  Too young, too old, too heavy, etc.  There were only a few who seemed to me to be up for the job, if it got beyond passing out food and drink.

In recent years, other than in really turbulent skies, I’ve calmed down a lot.  A few little bumps don’t bother me anymore, whereas, years earlier they’d set off immediate alarm bells in my fight/flight system.  No longer do I scan national weather maps up to a week before my flight to determine my chances of a smooth flight, nor do I count down the days before the flight, like a woman going to the gallows.  I learned early on that alcohol doesn’t help  for long.

When my sweaty palms finally popped  their first Xanax, however, it did truly help.  Insane thoughts diminished. Not foolproof though. In extreme circumstances, for example, if turbulence lasts for more than 5 minutes, after taking a Xanax, I might resort to cranking up my iTunes music and singing  along loudly to distract myself and everyone else on the aircraft.  Hey, you gotta do what you gotta do.

This would be a good day to fly from LA to NY!

I had to rely on my daughter several years ago to guide me off the plane after I decided I needed more than one Xanax to calm my delicate nervous system during a particularly rough flight from Tokyo to LA.  I knew I was in trouble, when, after takeoff, the pilot announced that we were flying into typical late November  weather, indicated by a series of storms lined up across the Pacific.

As a teen ager, I loved to fly.  Then, one year, flying the East Coast corridor from Miami to NYC, I was a passenger on the Flight from Hell. It frightened me so deeply, I’ve never totally recovered.  From the moment we were airborne, until we touched down in NYC, we experienced extreme turbulence. Immediately after takeoff, flight attendants were instructed to stay strapped in for the entire flight.  Meals were never served. It was far too rough to attempt a bathroom run. An ambulance met us at the airport upon landing to remove a few very sick passengers.

The plane flew on and on through endless dark and stormy clouds. It was like a bad dream that I couldn’t awaken from.  The plane constantly lurched from one side to another, dropping altitude and recovering it, doing everything except a perfect somersault. It might have made a good amusement park ride for daredevils.

The rosaries were out for most of the flight. I briefly wished I were a Catholic.  After about an hour of this, I lost the ability to think. I felt trapped and hated having no control to bring the that aircraft down from the sky immediately. My mind was in turmoil. Dear God, I prayed, if I survive this flight, I will never, never, ever get on a plane again.

Of course, I survived the flight, but it took years to climb back on board an aircraft with any semblance of composure.  For many years, I’d take a dreadful passenger train from Miami to NYC, rather than a flight. As bad as train travel was in the early 60’s, it was an alternative that I was grateful for, the coward’s way out. Finally, as this method of travel continued to deteriorate,  I couldn’t stand it anymore; the snoring, the lack of air conditioning, the long waits in the middle of nowhere waiting for god knows what.   I think the train was called the Silver Meteor.  Hah. The 24 hour trip was always a minimum of 3-4 hours late in arrival. I came to the conclusion, as most friends and family had done years before, that it was crazy of me to continue traveling the rails. 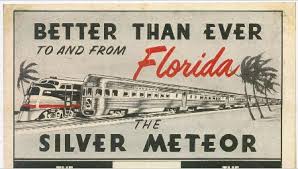 In the 1980’s my husband and I approached Kennedy airport for a late afternoon flight  to California.  The weather forecast, which I’d been listening to intently, was for severe thunderstorms in late afternoon. The day dawned with clear blue skies,  but as I watched the skies intently throughout the day, the dark clouds began to gather. I become an obsessive sky watcher on days that I fly. By flight time,the sky  was an advancing, ominous black wall.  At the airport, I kept waiting to hear that our flight had been delayed, but there was no such announcement.  Then, to my shock, there was a boarding announcement.

I could feel my husband getting increasingly irritated with me, as my fear got increasingly out of control, but  I nevertheless approached the desk agent at the gate to inquire about the wisdom of taking off in such bad weather. She curtly let me know the decision to take off was up to the pilot, and they intended to go ahead and board the plane.

I didn’t like that at all. My husband looked at me and said evenly, “The pilot doesn’t want to die.”   Not enough.  I wanted it in writing. I wanted to know that it would be impossible, even for a strong-willed pilot with an overpowering death wish to take off before the weather cleared.  I bid farewell to my husband at the gate, he boarded, and I checked into an airport hotel, to leave the next morning. 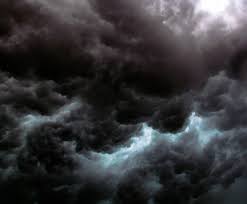 I’ve been on planes that have been struck by lightening and planes that had to make emergency landings.  I’ve come to understand that it’s not a simple thing to destroy a plane, but I guess you still might not want to book a flight with me.