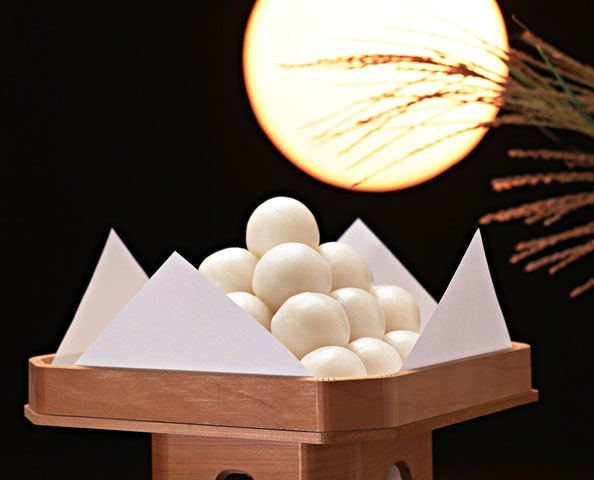 Such a hullabaloo about the moon in recent years.  Until recently,  a person only needed to know rhyming words such as moon, June, swoon, etc. inserted in insipid songs.  Now, to be fashionable means being knowledgeable about how often a blue moon comes along,  knowing the characteristics of a super moon as well as when and where to look for one. The past few days were the apogee of the full Harvest moon. The last several days Facebook has been full of spectacular moon images.  The Japanese have held moon viewing parties.  I’d spotted  evidence of the full moon only late at night, high in the sky, as it illuminated our now pathetically dry back yard.  Craving some natural inspiration, I suggested to my husband, that we head to the beach to watch the moon rise over the ocean.  We arrived about a half hour before the predicted moonrise, now timed perfectly from an iPhone app. 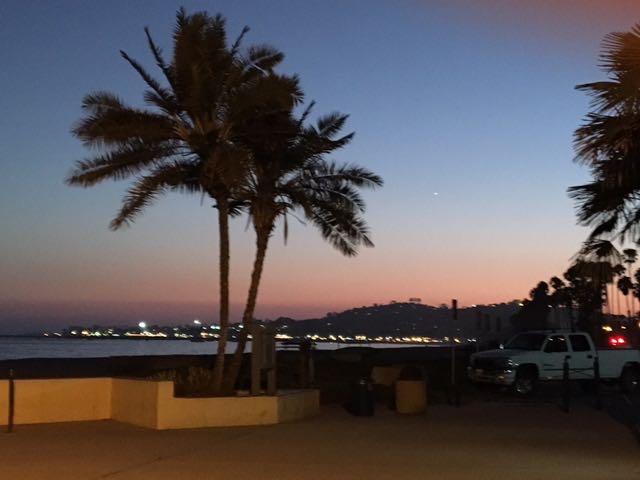 The late afternoon transitioned into early evening and finally into night, as we began our moon watch.  The offshore oil rigs, barely visible in the daytime, became illuminated Christmas trees balancing on top of the ocean as night descended. The scene outside the 1920’s Santa Barbara bath house shifted and became decidedly somber as the darkness deepened.  The daytime holiday atmosphere of bright sunshine, snack shop crowds, children playing in the sand had vanished.  It was replaced, as we watched, by the denizens of the night, the alternative culture of our California cities, the ones the travel magazines avoid like the plague.  The Santa Barbara homeless now claimed their places.

A youngish bearded man in jaunty plaid shorts began to make his rounds of the garbage cans, but coming up empty handed.  Soon another trim looking young man drifted by on a skateboard that looked self-propelled, carrying all his worldly possessions in one arm.  An old woman dressed in black, limping badly, came out of the shadows with the gear she needed to settle down for the night on the unforgiving concrete portico.  She carefully and repeatedly spread and smoothed out a blanket on the terrace and then began to search through the multiple plastic bags she carried along with her, I know not for what.  I wondered if she had enough to eat.  Before long another old woman, pushing a wheelchair in front of her, joined her.  There was a heated discussion between them that seemed to agitate the first woman, but eventually, they both quieted down. I wondered if this were their first encounter or if this was a nightly recital.

We kept looking at our watches and looking for the moon.

Two overweight men in green t-shirts that barely covered their bellies and proclaimed the word GREEN on them, came by to hose out the bathrooms.  City workers, I guessed.  Soon the water was running out of the bathrooms across the portico into the sand.  I half expected to see starving cats come crawling around the corners of the building. Maybe they came later. Most of the people who appeared so far seemed  starkly alone in the eerie yellow light cast by the overhead lamps.  It could have been a stage set.

We were observers in an alternate universe that I had never experienced.  I tried to imagine what it must be like to spend the night in this environment.  I  wondered about the stories each of the nightly inhabitants could tell.  Maybe they were beyond stories.  I wondered about their families.  I felt a deep respect for the courage, fortitude, and skills they must have to survive in their unpredictable and challenging environment. Simultaneously, I was almost embarrassed by my own level of comfort. How damn fortunate I was to be going home to a real bed with clean sheets, a new pillow, and private bathroom steps away.

We kept looking for the moon.

A fairly deep fog bank had accumulated on the sky/sea horizon.  My husband suggested that the moon might be hidden and we probably should head for home.

“Isn’t that the moon?”  he asked. We finally had gotten what we came to see, although not where we expected to see it. I felt deeply grateful to finally witness that huge golden orb that was slowly rising.  Yes, the entire evening  was worth coming out to witness.

Satisfied and more than a little saddened and unsettled, we headed for home.