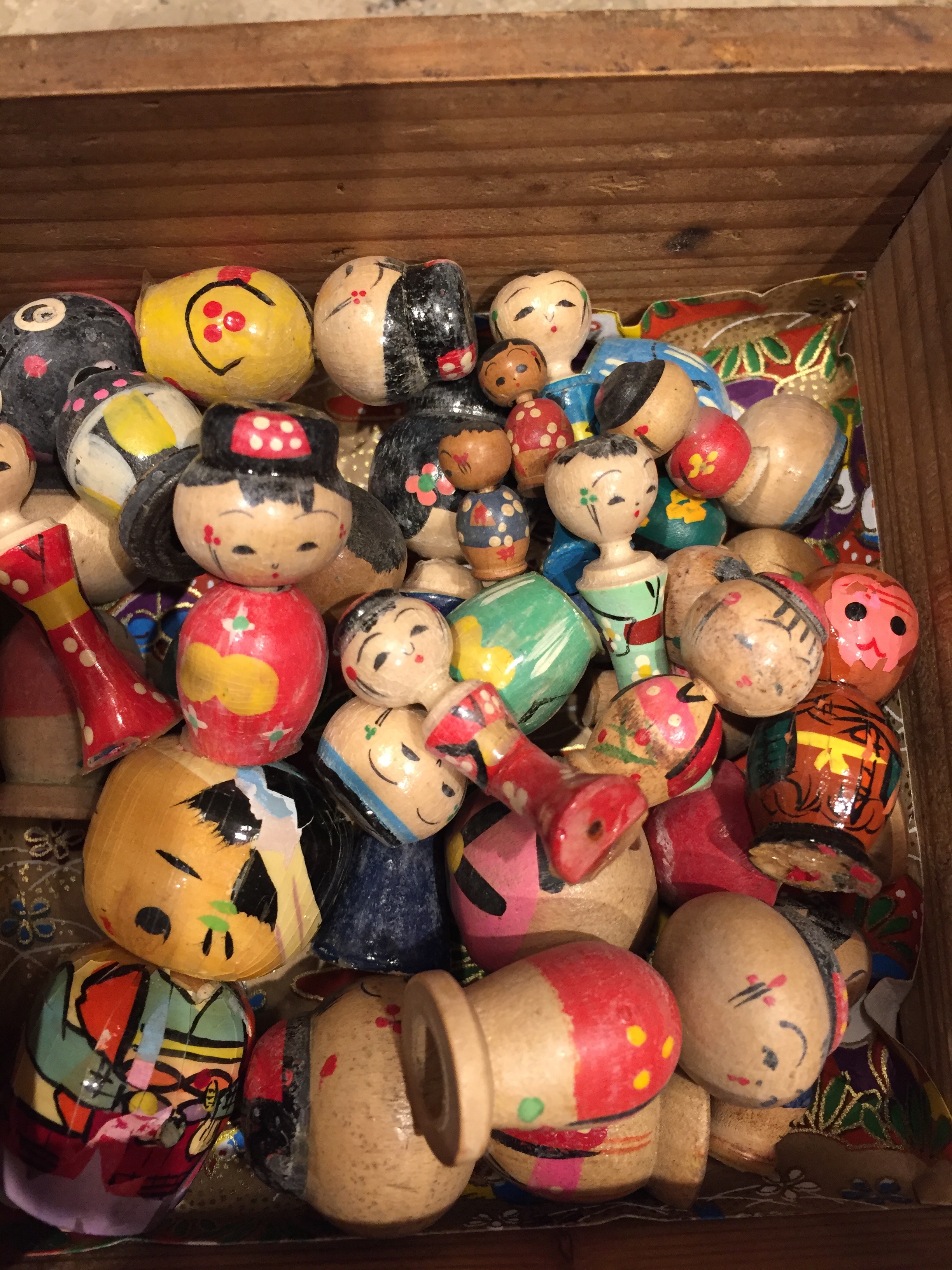 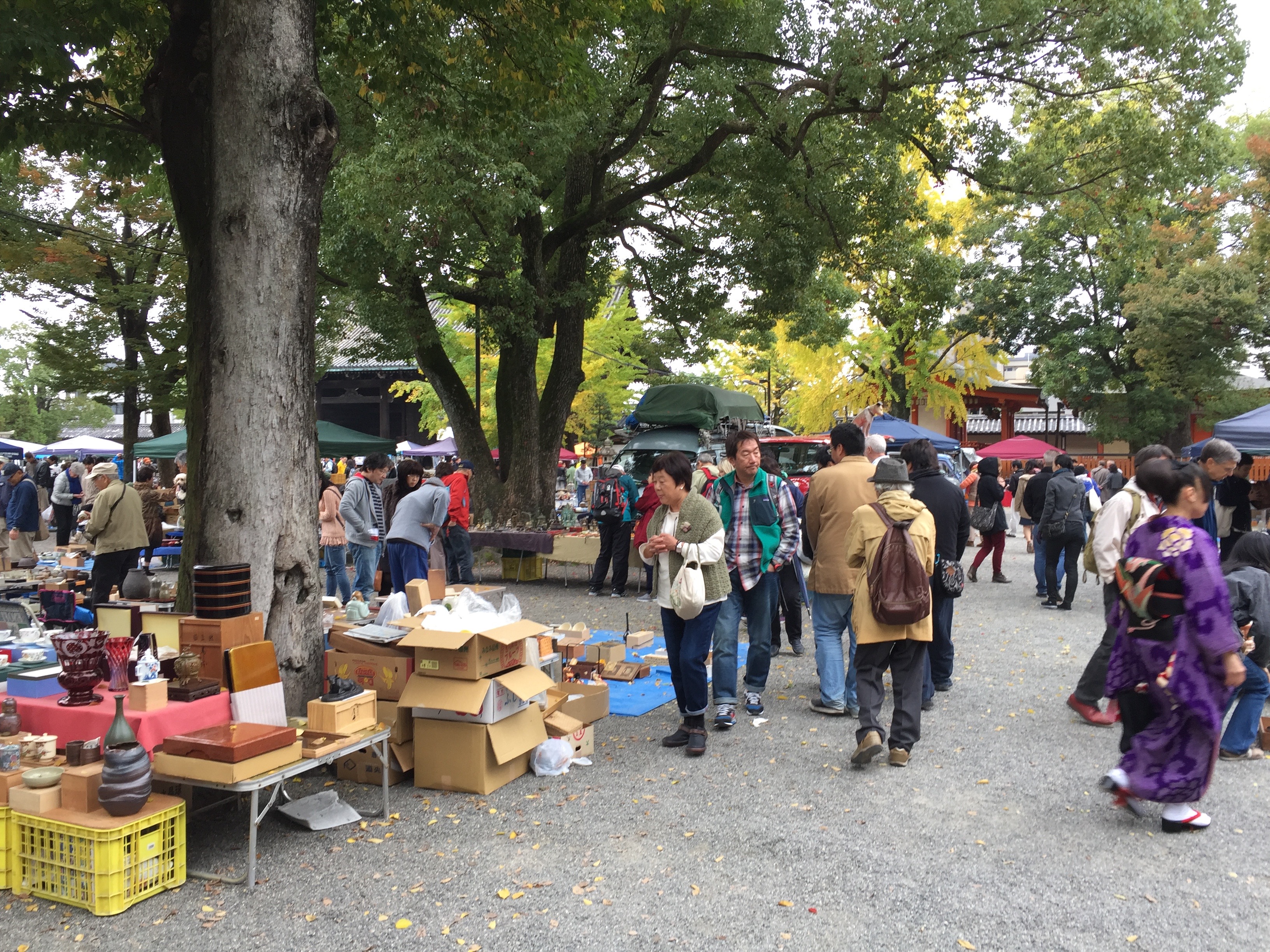 I thought I’d missed the major Kyoto flea markets this month, but I got lucky when I noted in my trusty Kyoto Guide that there was a smaller market yesterday at the Toji Temple.  It suited me well, because it was much quieter, with only stalls of antiques. No need to have to walk by all the food booths, the crush of other shoppers and the ready-made crafts.

Ok, a lot of it, was not truly antique, but it was old stuff. Some less sensitive souls might go so far as to declare it junk.  Although my husband has tried to break me of the browsing habit, I continue to like stuff.  Not ANY stuff, but some stuff that carries with it some whimsy, some beauty, or a whiff of nostalgia. 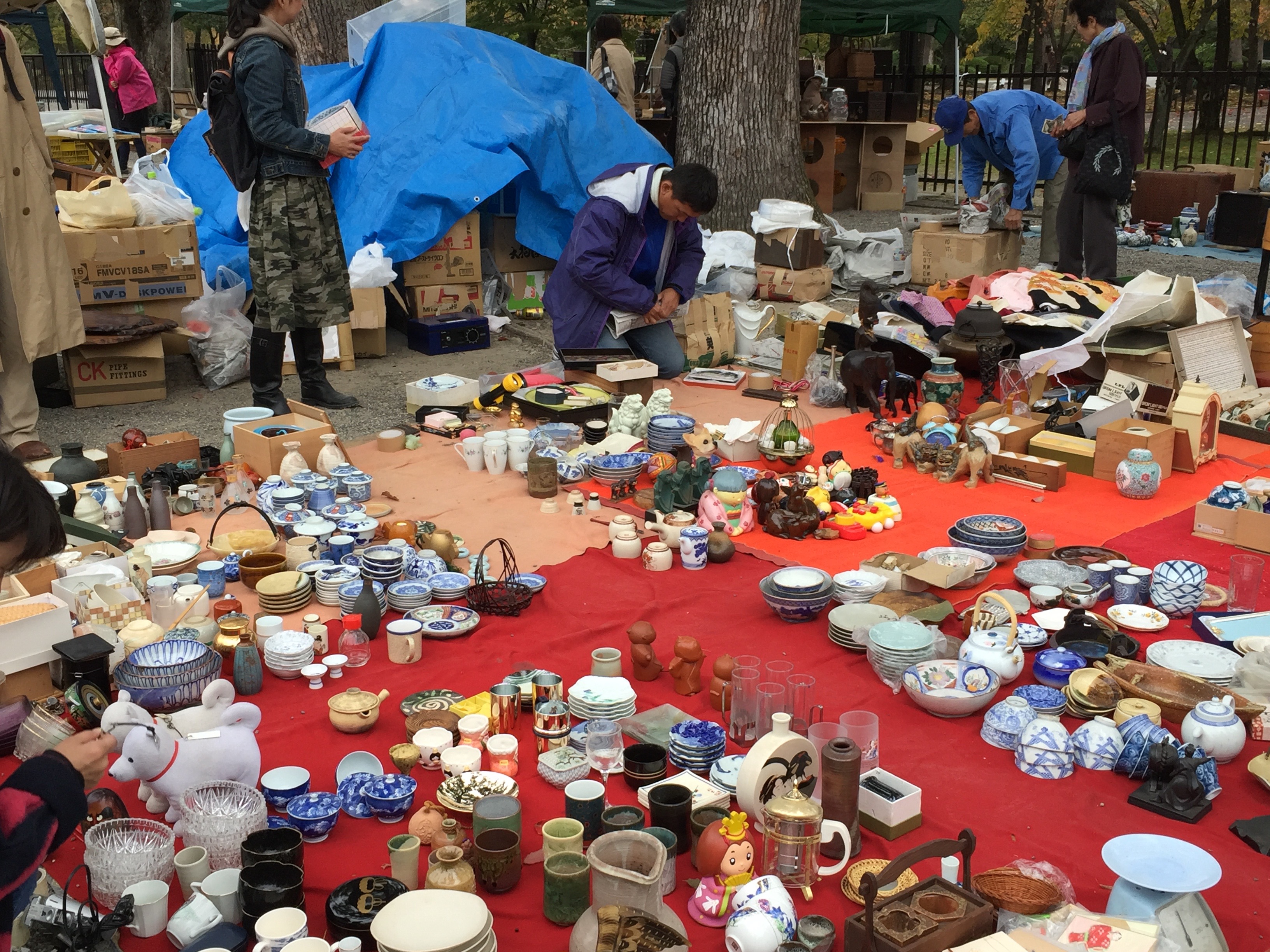 I think most of the high-end stuff in Japan now goes to galleries, collectors or auctions.  But, the fun of the hunt for me, is not to find something precious, but something representing another time that might have been very common in its day, but is now, not often seen. I like wondering which hild must have thought this bike was the best. 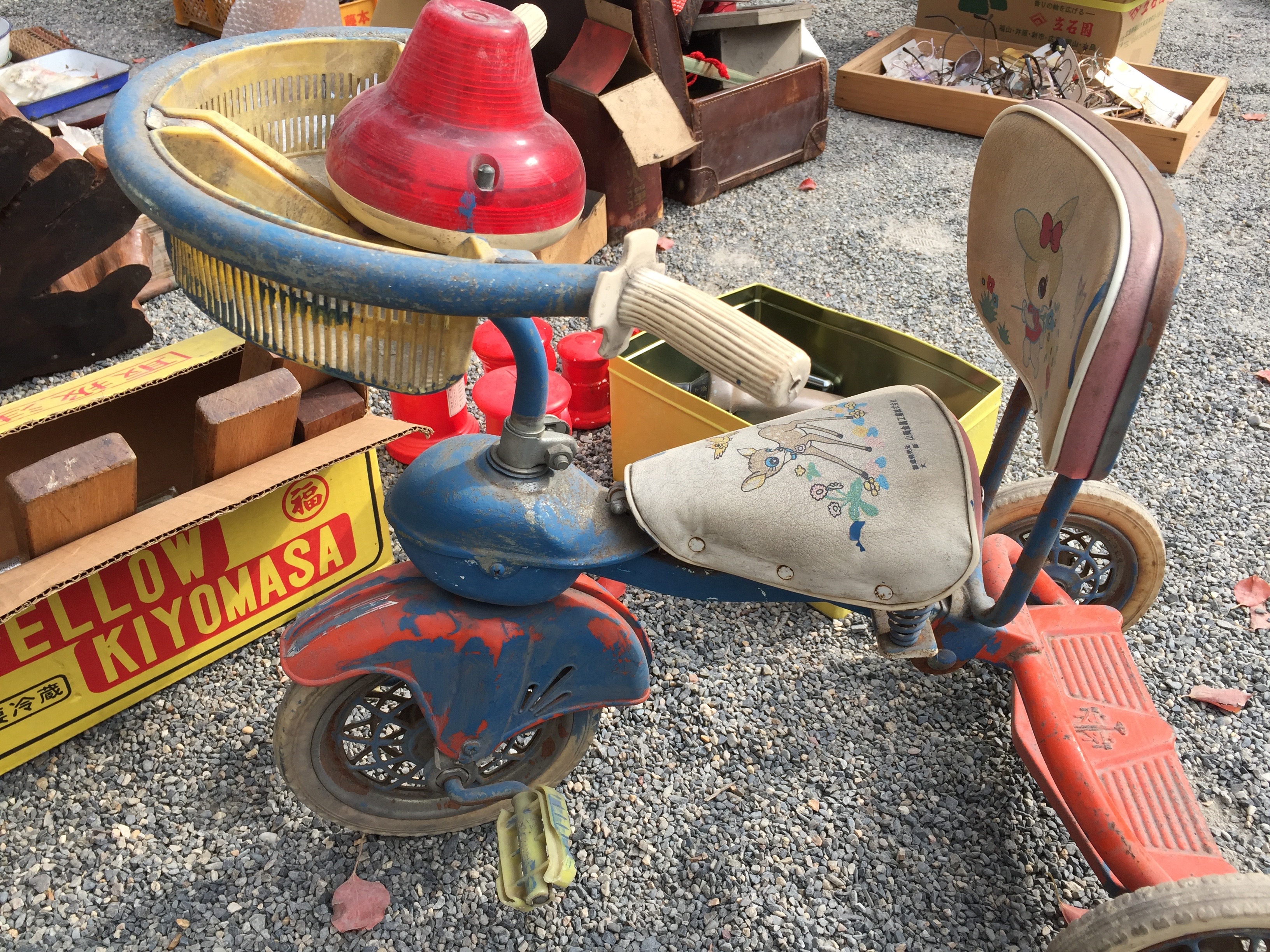 I have gotten more selective over the years. I like to think, a lot more selective, but that’s probably in my eyes only.  When I first began coming to Japan, just about everything caught my eye.  Now, I can usually tell in a quick glance, whether or not it’s of interest to me. 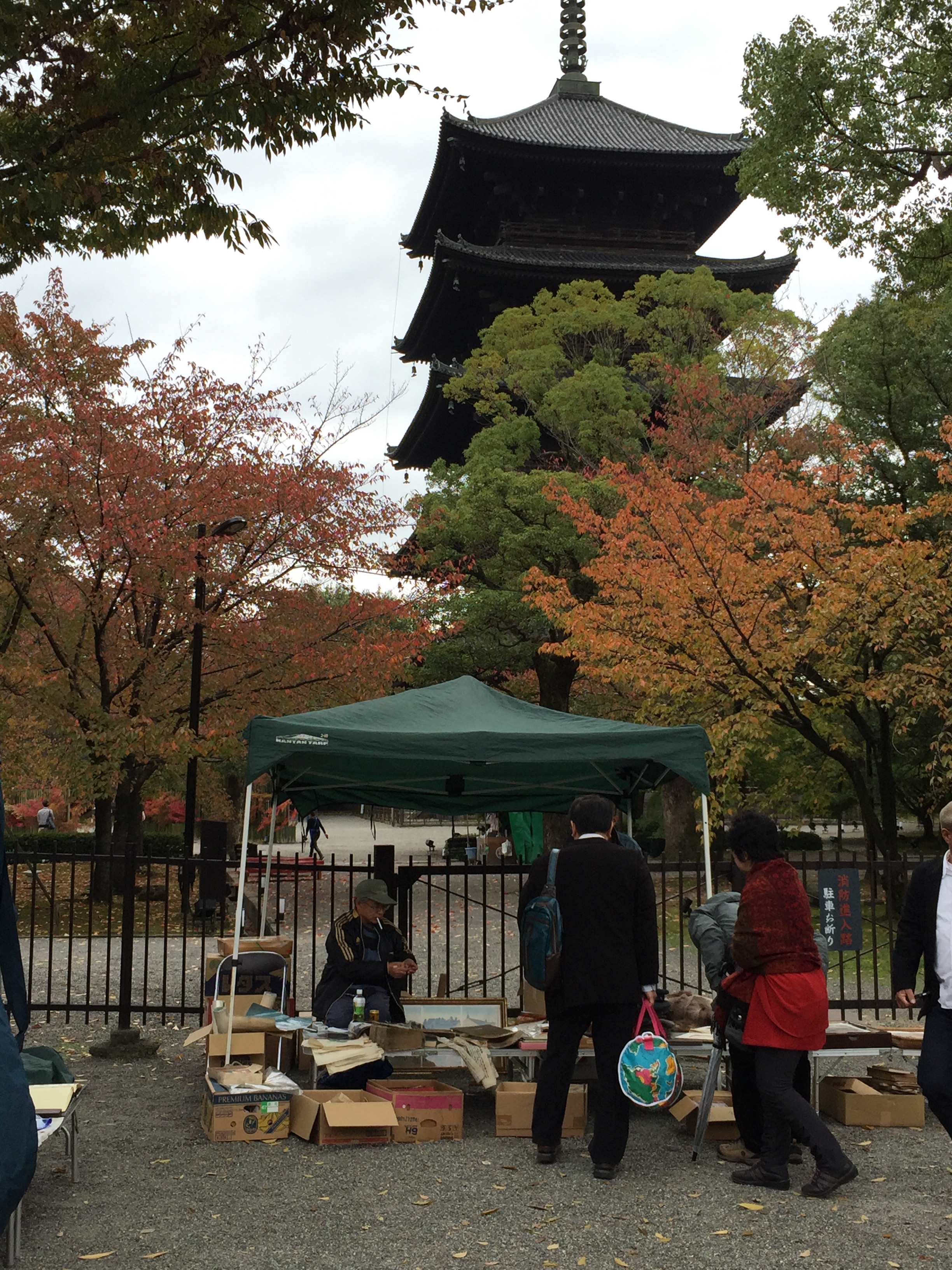 I was surprised to see the first evidence of leaves changing color at this temple complex.  A few regal old gingkos were turning gold.  The sky was a moody grey and people were pretty bundled up. It was a fine morning just to lollygaggle along, from one dealer to the next.  There were the usual piles of dozens of used kimonos and obis.  There were piles of scraps of kimono fabric, that had been disassembled, because the whole kimono could no longer be worn.  However,  all parts that can be reused are saved and respected. 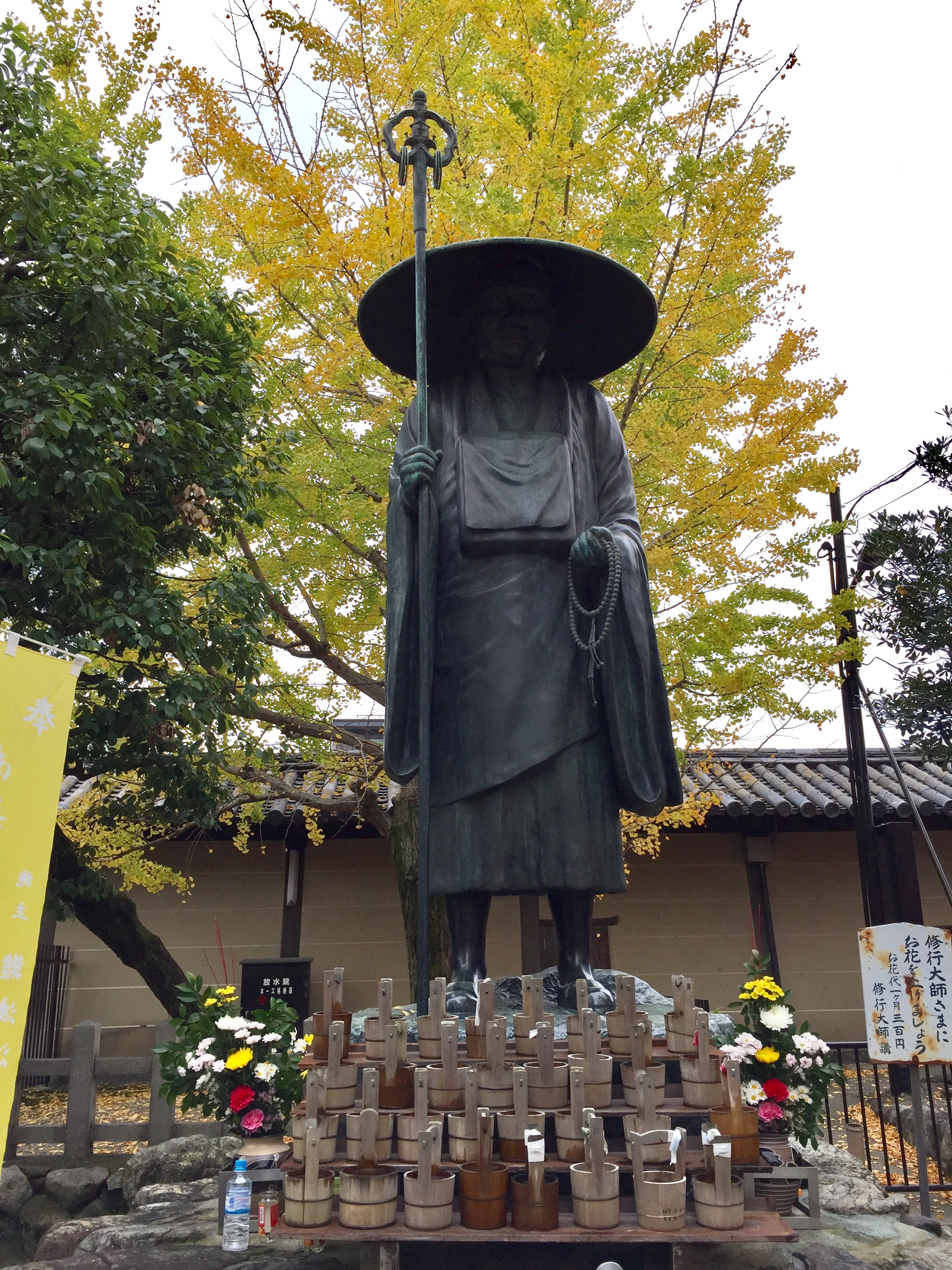 Mottainai is a Japanese concept that points out the shame of waste.  If I understand it correctly, it arises because of the Shinto belief that objects, both animate and inanimate, have souls that should not be disregarded.  I think, when I’m attracted to an old object, that its soul has caught my attention!

I knew immediately when I saw this little draw full of tiny old wooden dolls, that I was there to rescue them and bring them home.  Don’t they look happy to be appreciated again??!!

Mottainai attempts to communicate the inherent value in a thing and encourage using objects fully or all the way to the end of their lifespan. Leave no grain of rice in your bowl; if a toy breaks, repair it; and take good care of everything.