My History of Eating, Part One

Disclosure:  I’m Jewish. Food and its consumption are a part of my culture. That might have something to with the attention I’ve paid to food most of my life.  Taking it to another level, I married a Jewish man whose Jewish Mother wanted to know when we visited, what we wanted her to cook for dinner.  This was before we finished breakfast.

Although my father was a grocer, the food choices in mid-century New England were a far cry from what I’ve now come to expect since I’ve been living in CA. New England gastronomy was strongly influenced by early waves of immigrants from England, Ireland and Poland, not nations known for their culinary prowess.  I grew up working in my parents’ store, surrounded by food, much of it canned, bottled, some of it frozen, with a produce section that only drew my attention when local fruit and vegetables became available for a brief few months between the last freeze and first frost.

My mother worked in the store with my father most days.  For dinner, when I was growing up, I’d put 4 Idaho potatoes in a 350-degree oven about an hour before my parents were expected home for dinner. A most typical dinner included the potato I’d baked, a  broiled a piece of meat, and a side of once frozen, Birds Eye vegetables, usually green beans or peas, maybe canned corn. A side plate held a salad wedge of iceberg lettuce, topped off with Wishbone Italian dressing.  The meal would often be kicked off with half a Florida grapefruit, if they were in season.  If Mom felt daring, she’d occasionally broil the grapefruit with a melted brown sugar topping.  Oh, I forgot to mention a usual side of applesauce.

Restaurant food would provide some derivation from the home scene. However, local menus would be limited to Yankee stand-bys, big chunks of roast beef, cream based chowder, and fancy sweet rolls, in settings that evoked Ye Olde New England. If fish was on the menu, it was bathed in and surrounded by butter and buttered bread crumbs. A shrimp cocktail was a lavish indulgence.  Unfortunately, the well-known shellfish of New England was only available at the coast.

My Mom’s two stand-by cookbooks were the Joy of Cooking and the New Settlement House Cookbook which she acquired when she got married. I don’t think anyone collected cookbooks in those years.   But she somehow managed to put a decent dinner on the table 7 nights a week, as well as rise early to make my younger brother pancakes from Aunt Jemima every single morning.  Ethnic cuisine was limited only to bad Italian-American food, which was all we knew.

Annual trips to NYC would provide us opportunities to taste American Jewish food at its most indulgent.  We’d gape at the serving sizes,  at least 3-4 times the size of servings at home.  We’d gobble down Lindy’s cheesecake, ridiculously sized deli sandwiches of corned beef, piled high on fresh rye bread, and of course, eat real bagels, which in those years, all of which were only available in NYC.  The food available in NYC was spoken about in hushed tones.

I had little interest in learning how to cook.  When I got married. I could make french toast and hard boil an egg.  Now that it was my turn to create a dinner each night for myself and my young husband,  I fell back on what I knew:  buying a piece of meat from the butcher each night, baking a potato and serving once -frozen vegetables.

My food world expanded dramatically when I was introduced to the Time/Life Picture Cookbook, a coffee table sized cookbook, published in 1959 which inspired me in more ways than just cooking a meal.  It showed off a whole new way of preparing food, so much larger in scope than I’d been exposed to.  I plunged in, essentially trying to prepare party food from this cookbook each night. I spent the hours needed to attempt to achieve the gorgeously photographed outcome displayed in the book.  I followed their recipes precisely, sometimes with better results than others, but it was through that cookbook that I got my sea legs.  It was through that cookbook that I glimpsed a colored photograph of a daytime party outdoors on the deck of a California home.  I’d never seen anything more alluring or glamorous.  The die was cast.

It was through that cookbook that I glimpsed a colored photograph of a daytime party outdoors on the deck of a California home.  I’d never seen anything more alluring or glamorous.  The die was cast. 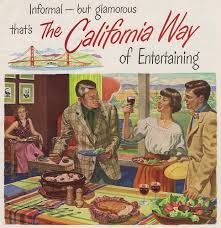