A Blissful Visit with a Good Friend

In everyone’s life, at some time, our inner fire goes out. It is then burst into flame by an encounter with another human being. We should all be thankful for those people who rekindle the inner spirit. ~Albert Schweitzer

There are so many kinds of friends we make in a lifetime. Many come and go for many reasons.  A special few remain with us for a lifetime.

We have made a most wonderful friend here in Kyoto.  Matsuzaki Katsuyoshi is a splendid artist; a sculptor who transforms inanimate stone into spiritual omamori, in this case, he carves small deities whose gentleness, and kindness provides protection for its owner. I have come to think his sculptures radiate his own spirit of kindness.   I have several at the entrance to my home who greet me daily as I enter and leave.  Now I have one to watch over our apartment in Kyoto.

I’m not sure I believe things happen for a reason and not by chance alone, although our friendship seems to have been preordained.

I met M-san  at an art exhibit in NYC at a Japanese clothing store I like to visit about ten years ago.  He spoke no English, but through a translator, invited me to his studio on my next upcoming visit to Kyoto.  So began a deep and lasting friendship over the years. We both enjoy laughing at similar things and we both enjoy being silly at times. He’s a master at making goofy faces which seems an unusual skill for an adult male in Japan. 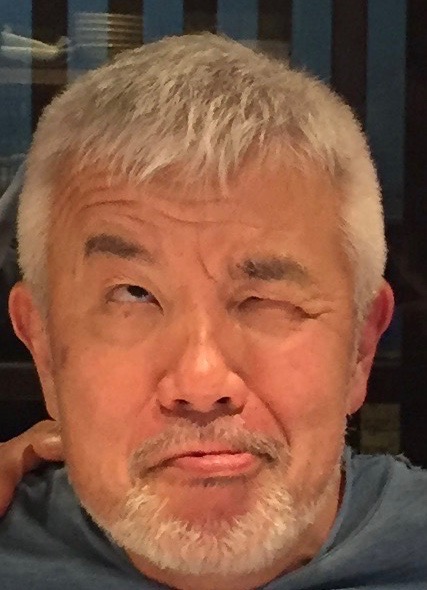 Over the years, we’ve visited him when we’re in Japan and he’s visited us in Santa Barbara.  He’s  become a family friend to all of us, dogs included.  He has learned quite a bit of English and what we can’t communicate verbally, we are able to intuit with the help of google translate or sign language.

We were lucky to visit his sculpture studio yesterday, snug against the hills in far Western Kyoto.  He works in peaceful seclusion in a rural setting at the end of a dirt road bordered by a bamboo forest, and fields. While we were visiting,  a nightingale practised his song from the nearby woods.  The strengthening spring sun radiated warmth and a sense of wellbeing on those of us assembled for the visit.

I eagerly surveyed his recent works assembled in neat rows inside his studio.  More “friends” waited outside. 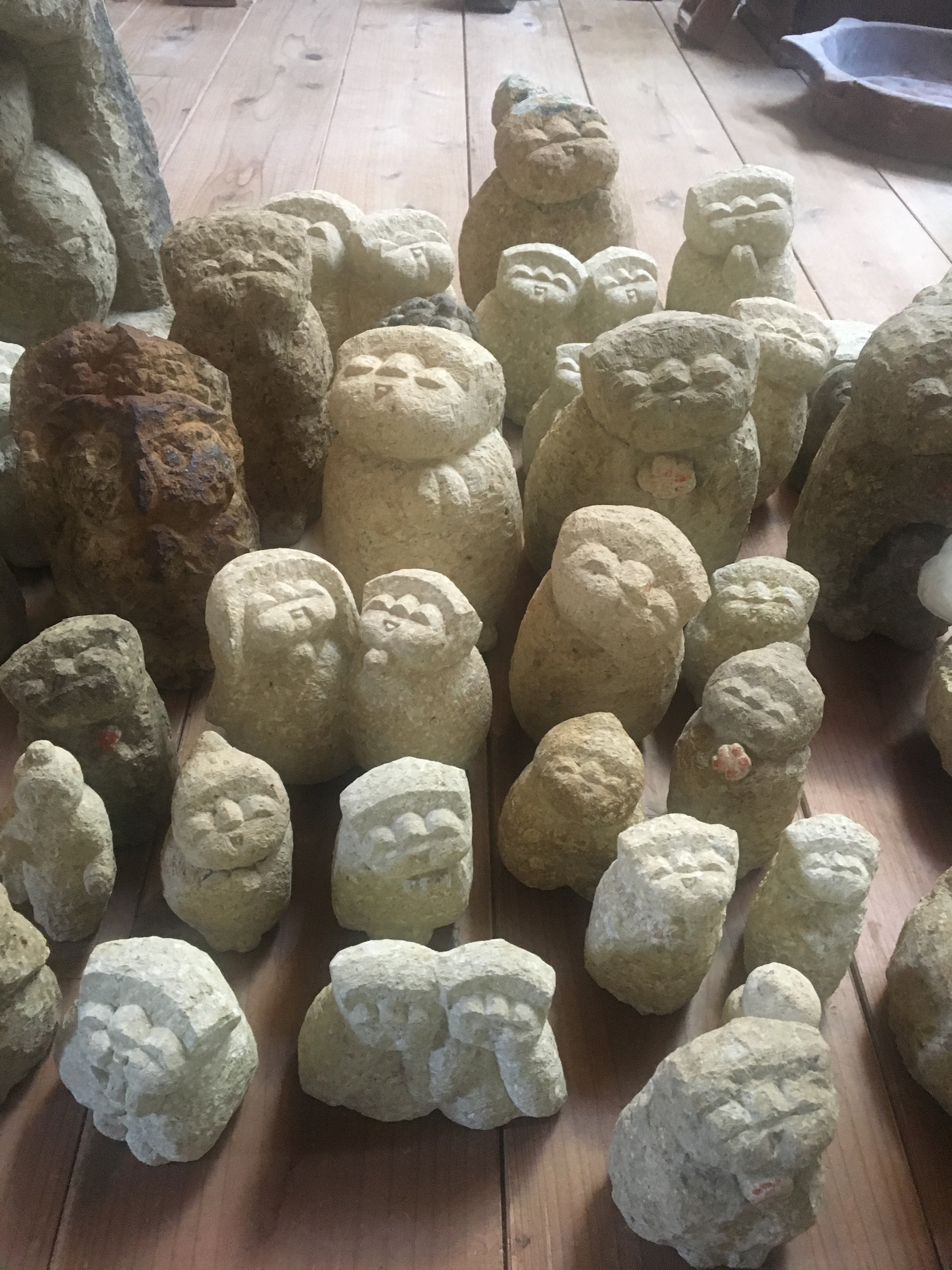 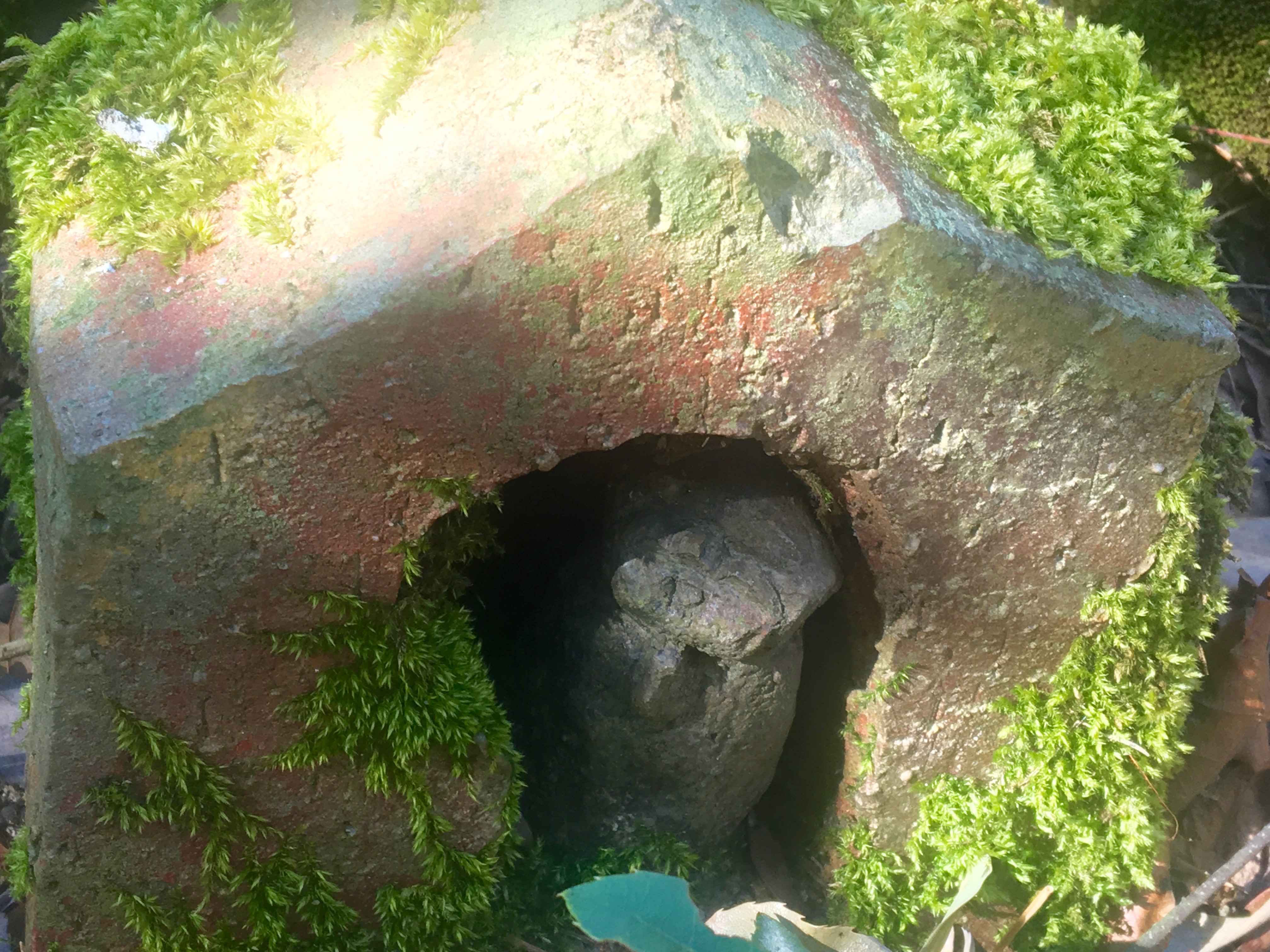 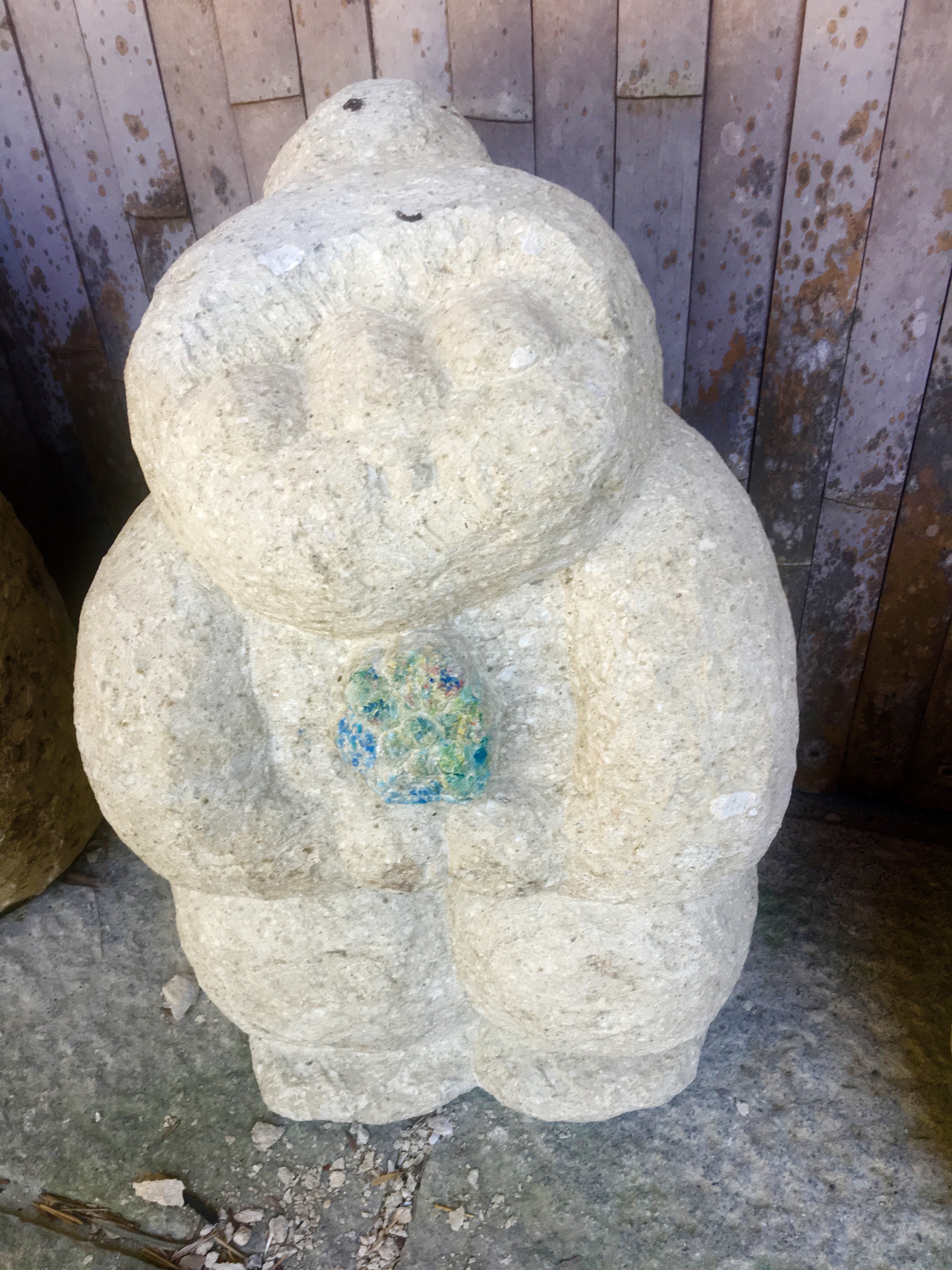 My daughter requested that he show us all how he worked. Before we knew it, our grandchildren were hard at work, fascinated by the craft. I think M-san might have taken Silvie on as an apprentice if we lived a little closer. 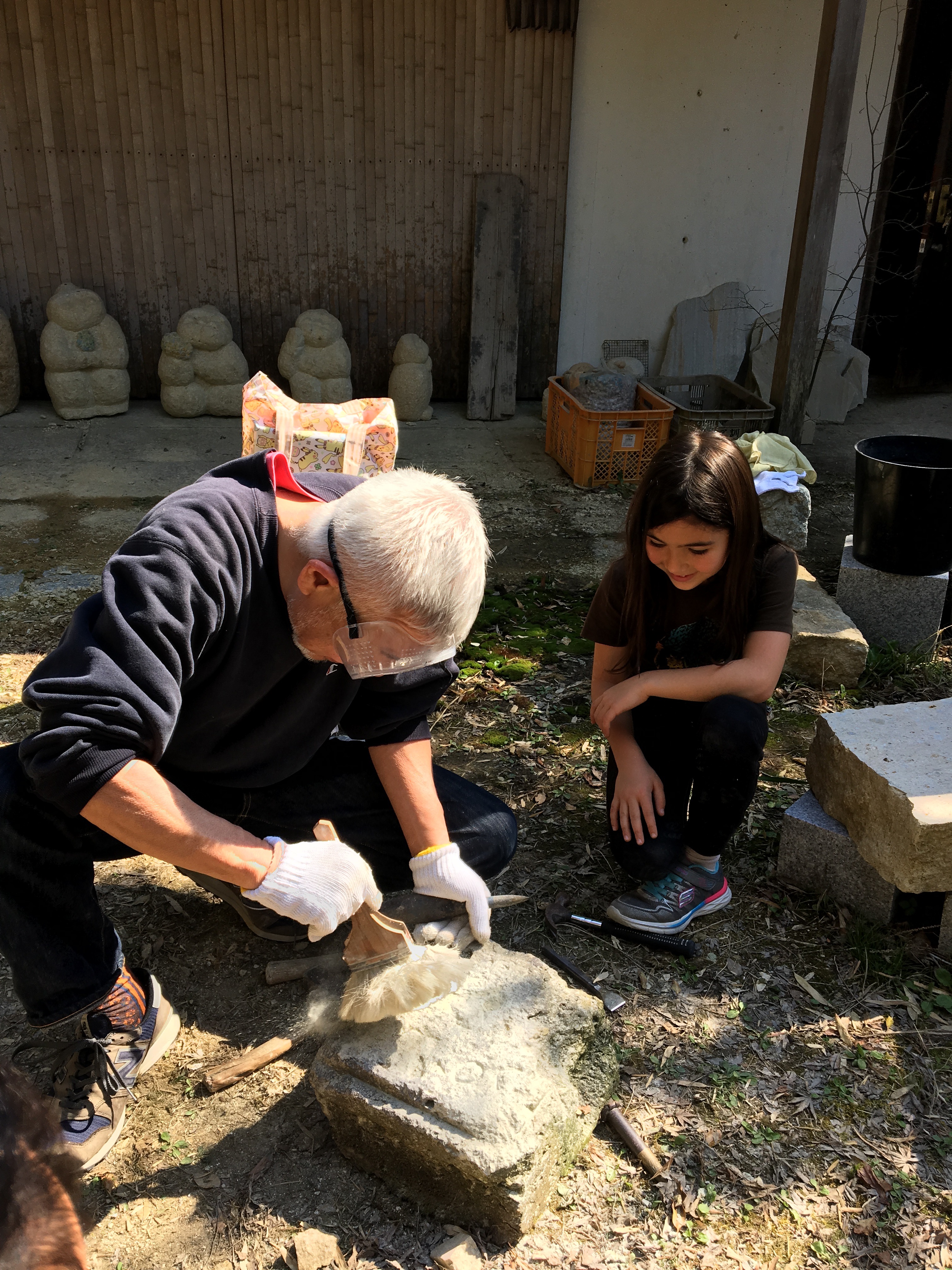 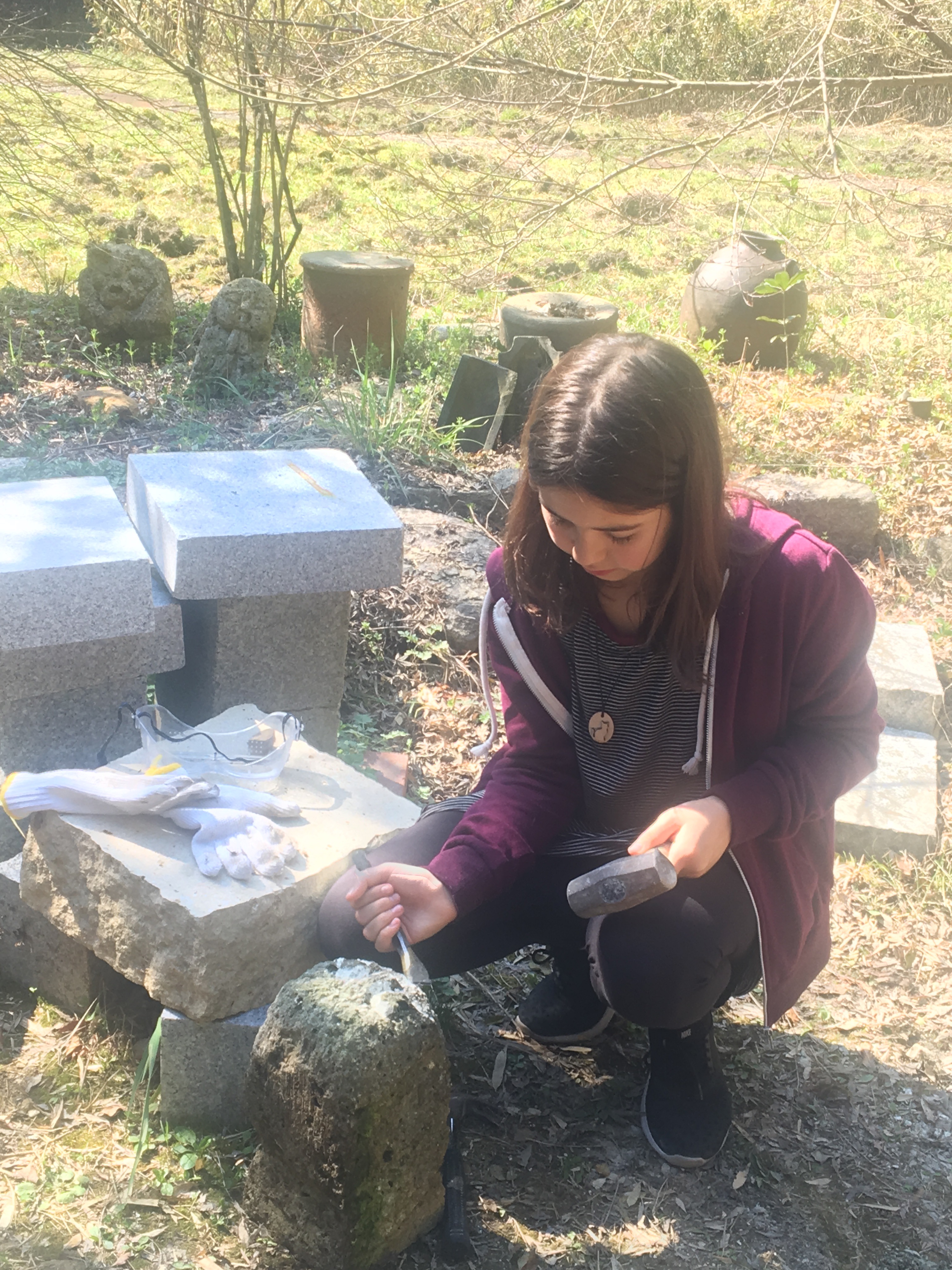 Between heaven and earth, there is only one you.

We couldn’t bring an end to the afternoon until we quickly agreed to meet again next week.