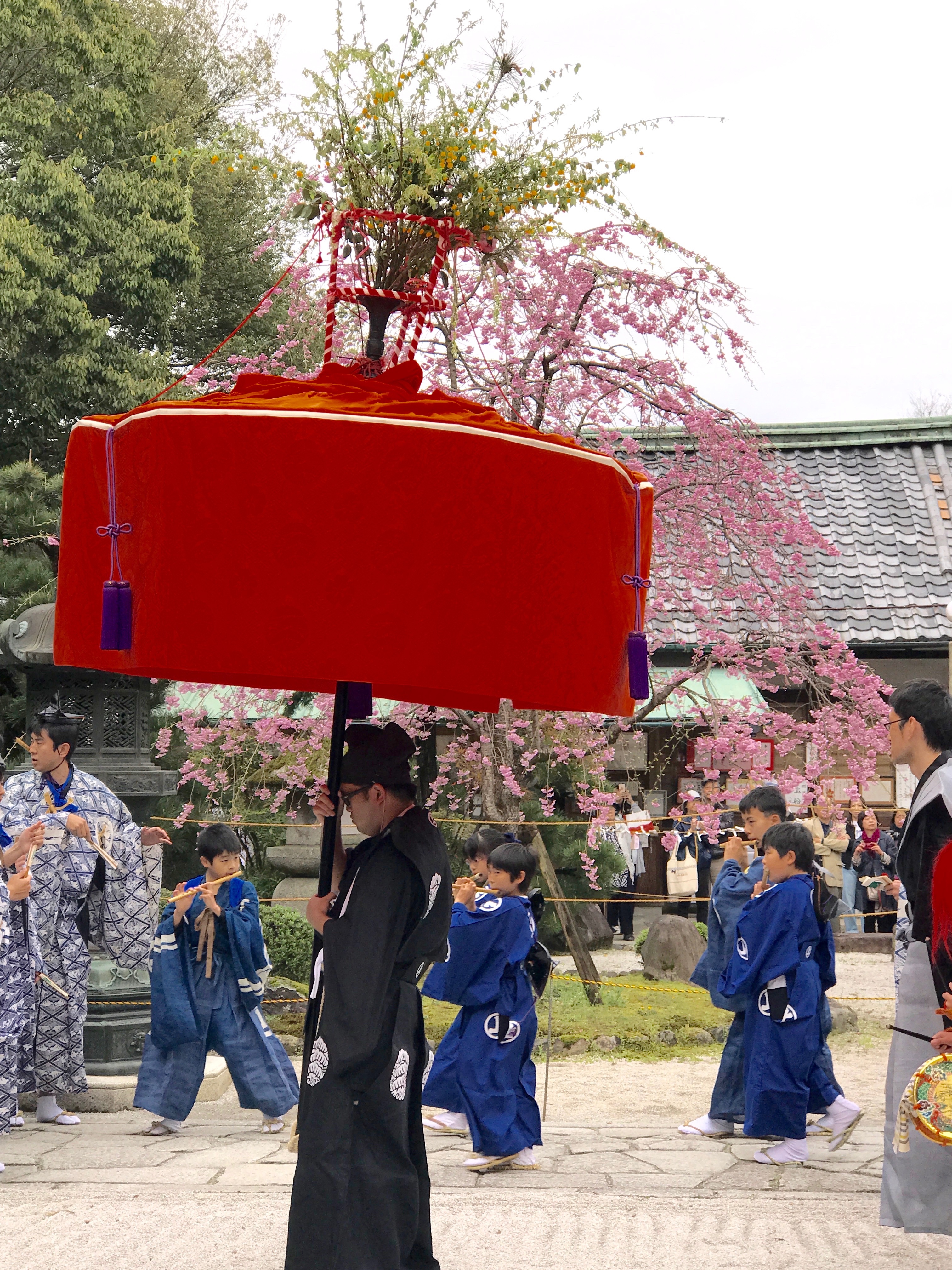 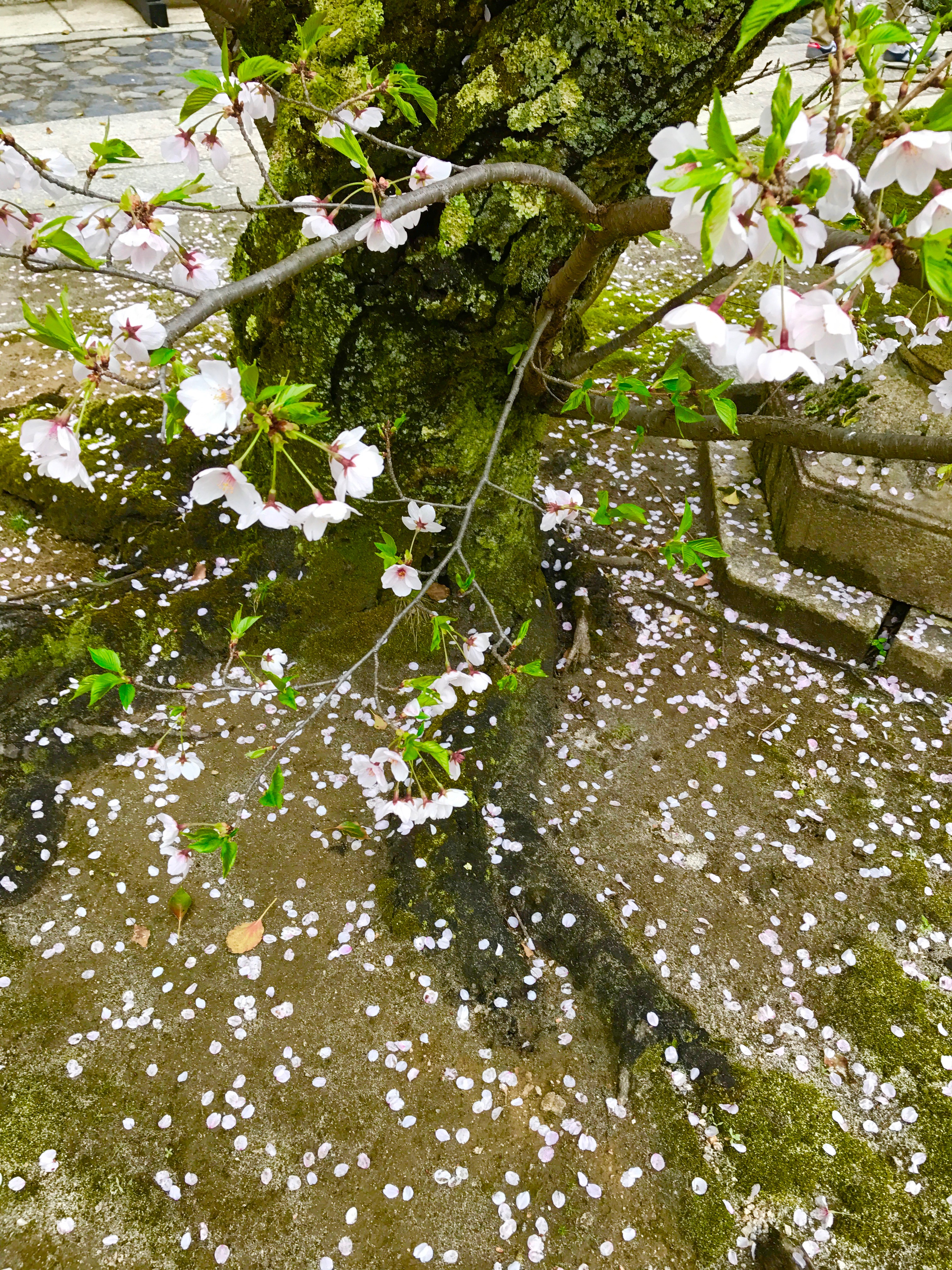 Who’s to say why I feel such a deep connection to Japanese places of worship, be they temples or shrines?  Is it the setting?  The architecture?  The gardens?  The rituals?  The air of mystery surrounding something I don’t understand very well? 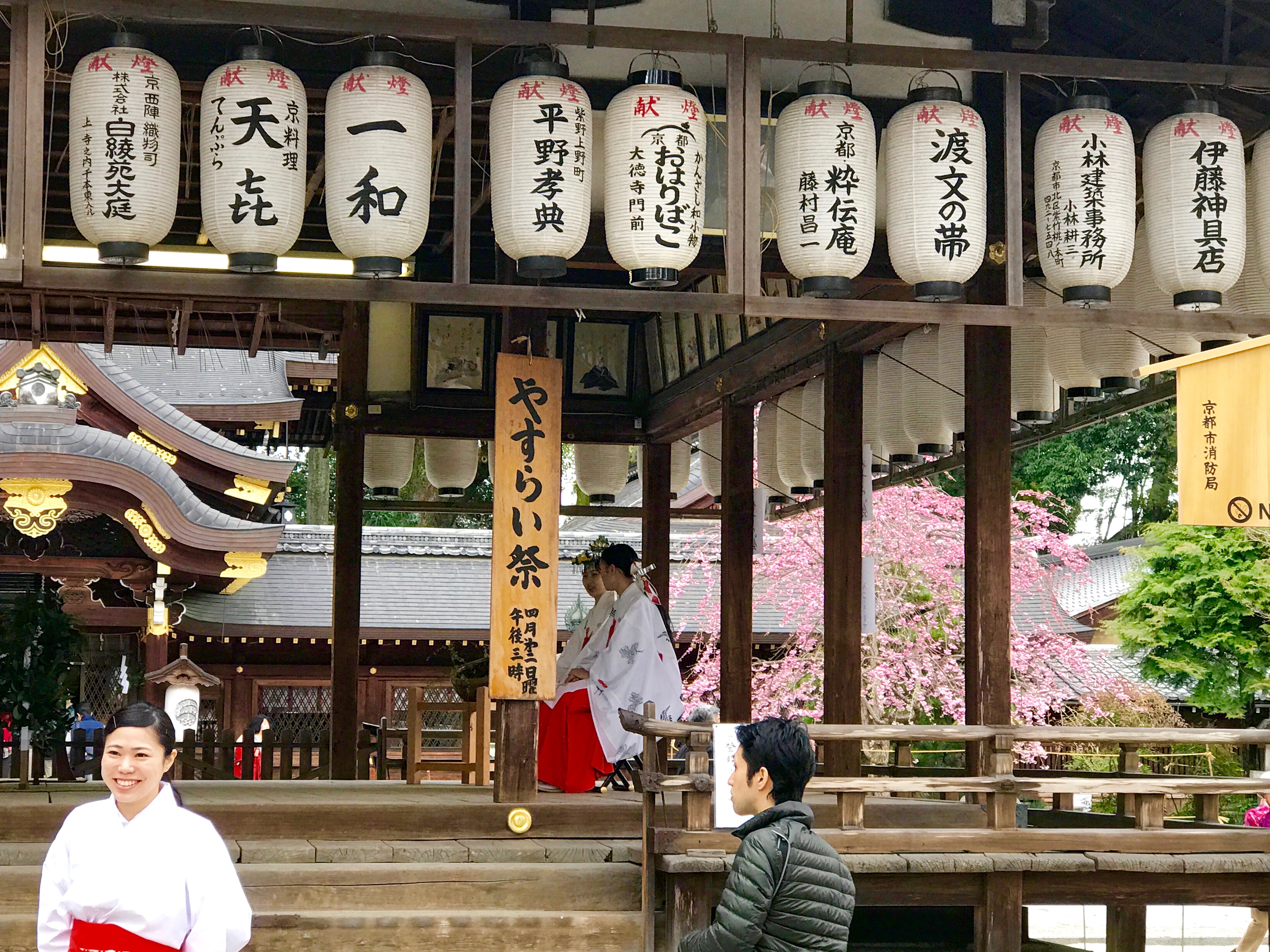 I can’t say for sure, but what I can say is that I am consistently pulled in their direction.  I spend a fair amount of time when in Kyoto, revisiting places of the spirit and discovering new places of the spirit.  Kyoto has over 2000 shrines, temples and gardens, so there’s literally a lifetime left of exploration.

The description in the Kyoto Visitor’s Guide to the over one thousand-year-old Shinto Yasurai Festival on the 2nd Sunday in April got my attention. It was described as one of the three biggest and most unique festivals in Kyoto, performed to gain protection from illnesses.  After a few months of recent illnesses, I thought a little protection might be just what I needed.  It certainly couldn’t hurt! 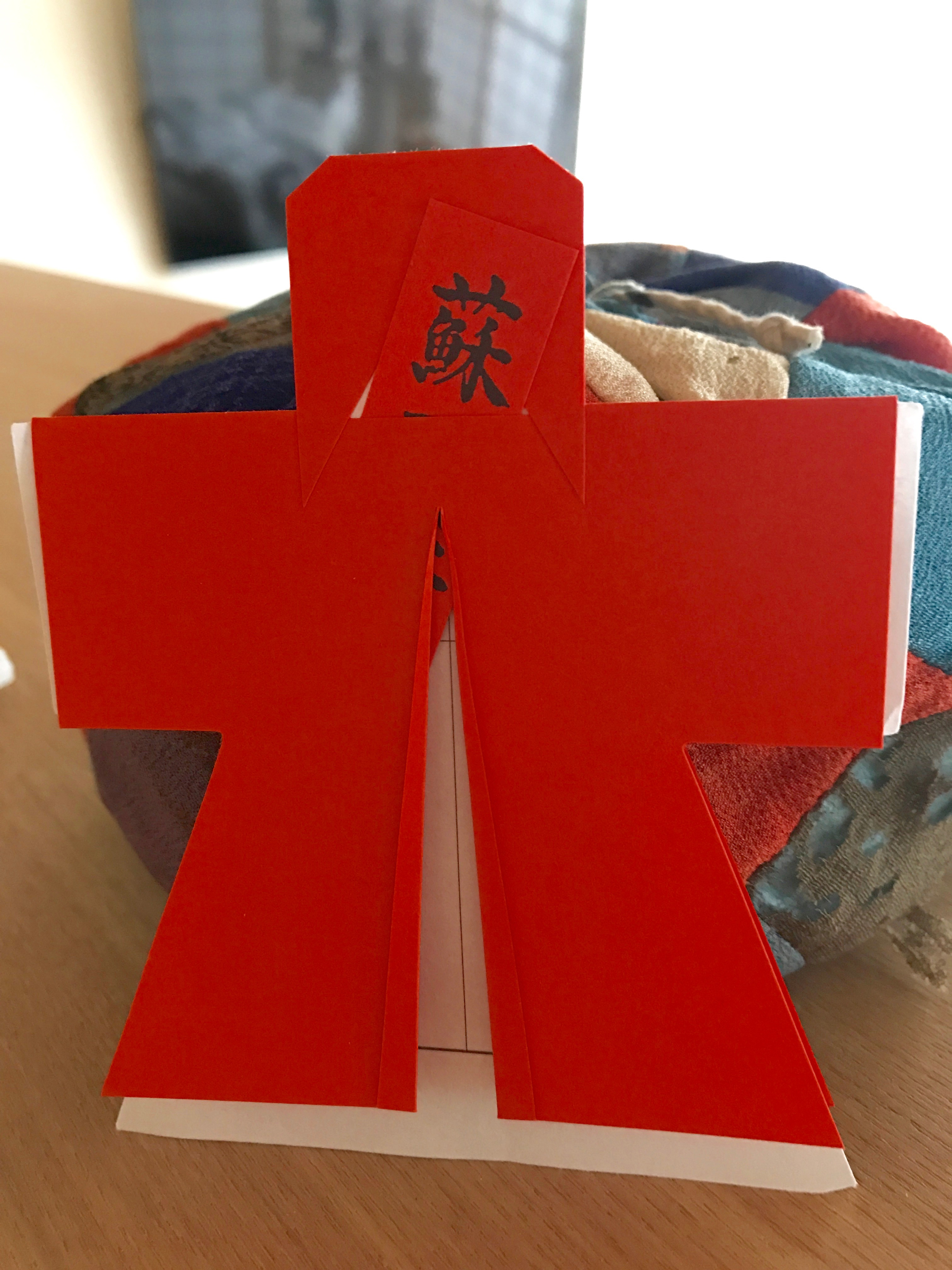 My husband and I arrived at the Imamiya Shrine on a cool spring day.  We had no idea what we were doing but went along with the flow.  We soon spotted some young shrine maidens sitting behind a table. With a welcoming smile, they instructed us to write our health wishes on a small piece of paper hidden within a small red-orange paper kimono which they handed to us.  Writing completed, we then presented our wish to another shrine maiden who blessed us and put the paper wish in a large round basket with those of other participants.  We kept the paper kimono itself.  It now hangs in my office. 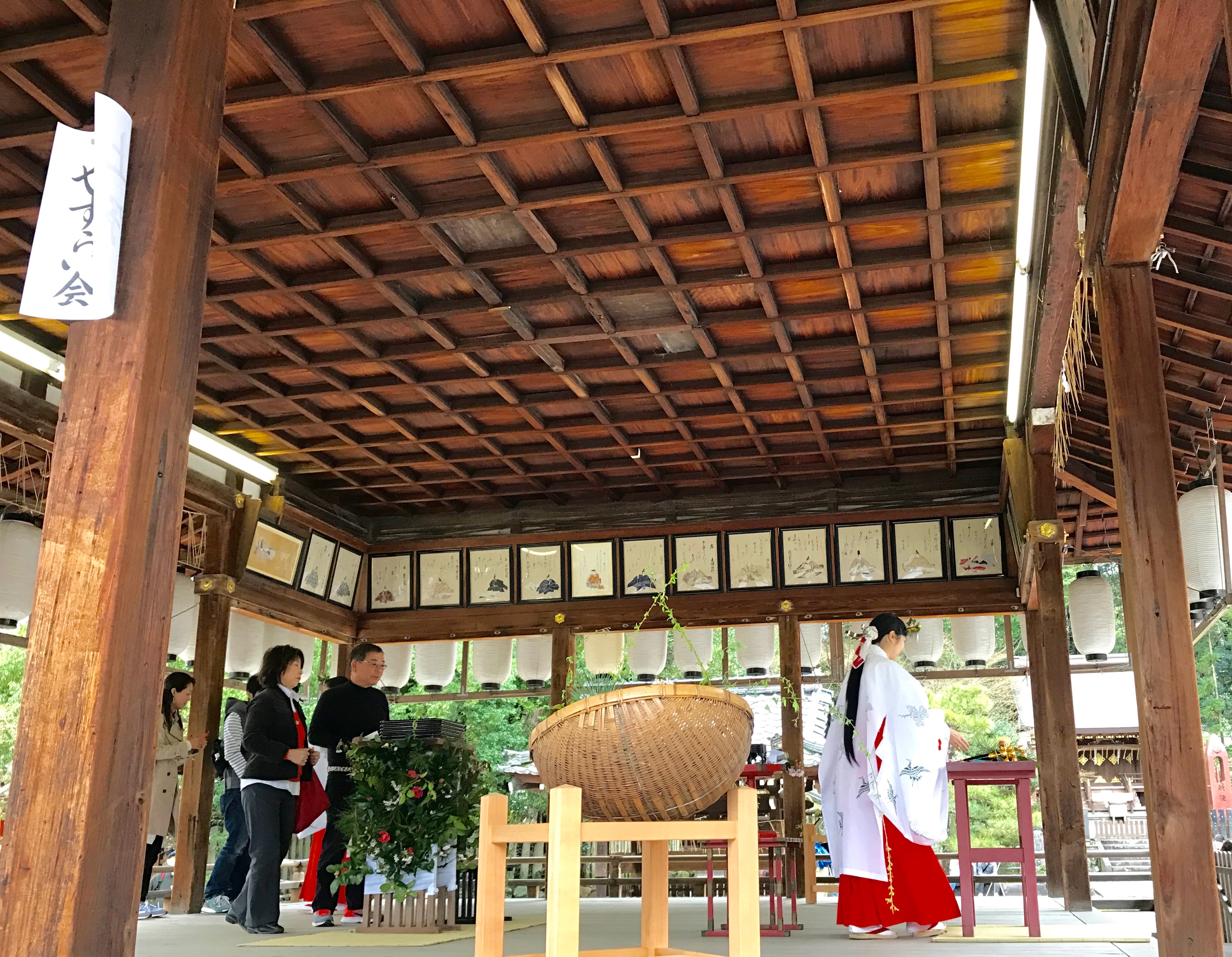 Within a short time, the crowds thickened and a parade of costumed worshippers of all ages made their way through the grounds of the shrine.  They played a repetitive tune on flutes, hit drums and chanted in front of those of us assembled.  A few wore bright red wigs, representing demons.  It was quite a sight.  The knowledge that this ritual or something like it has been repeated and performed for almost a thousand years, is impressive. 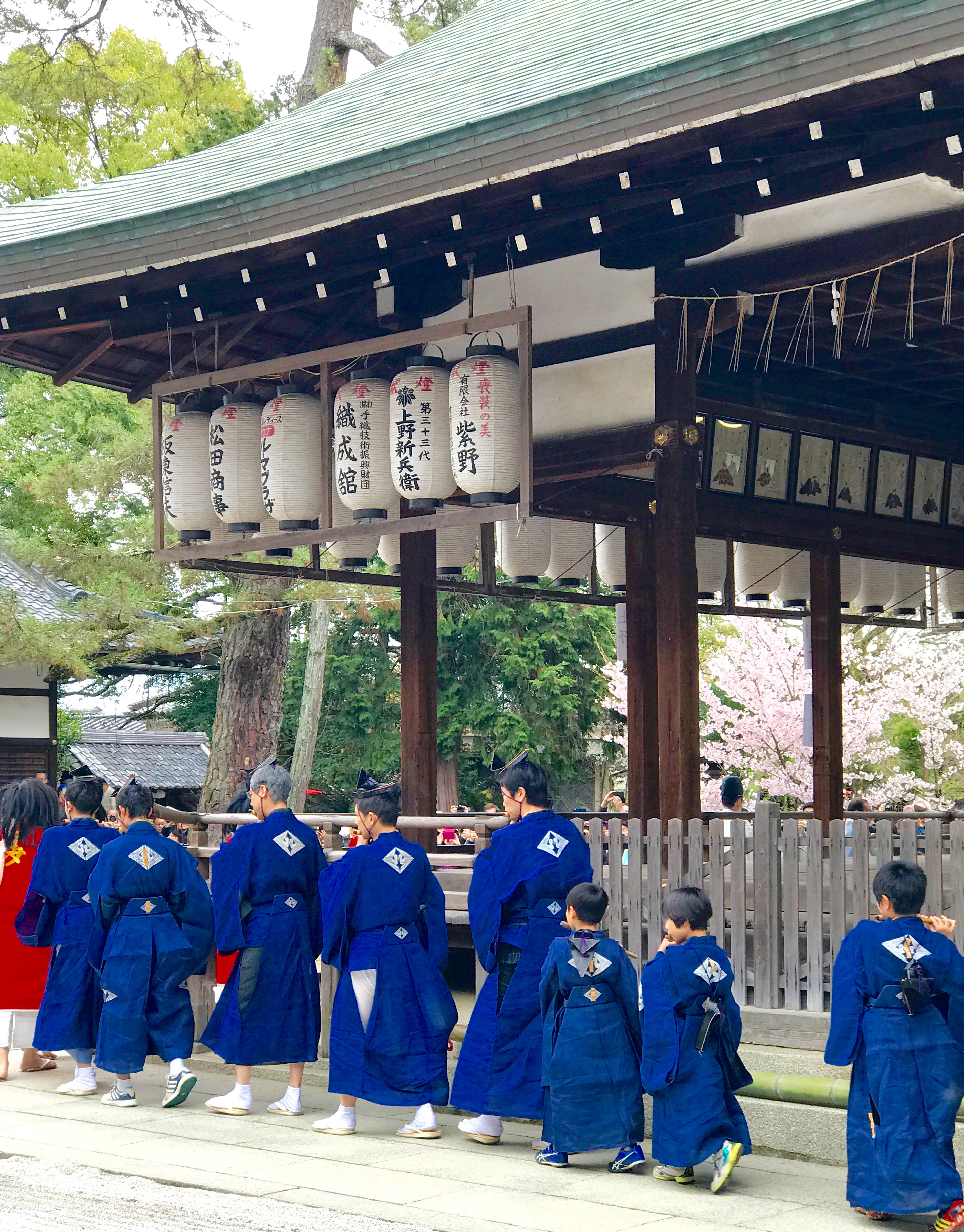 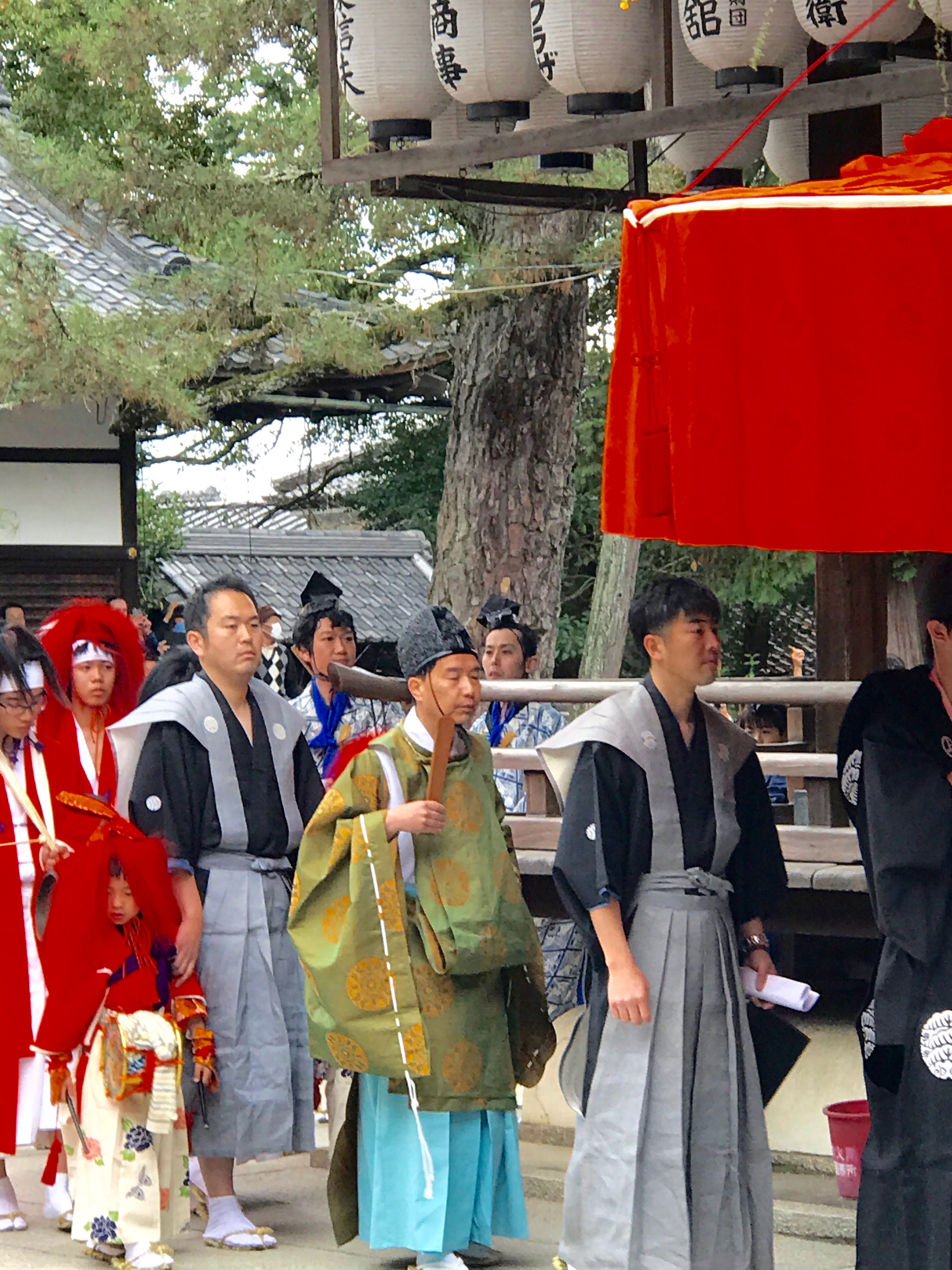 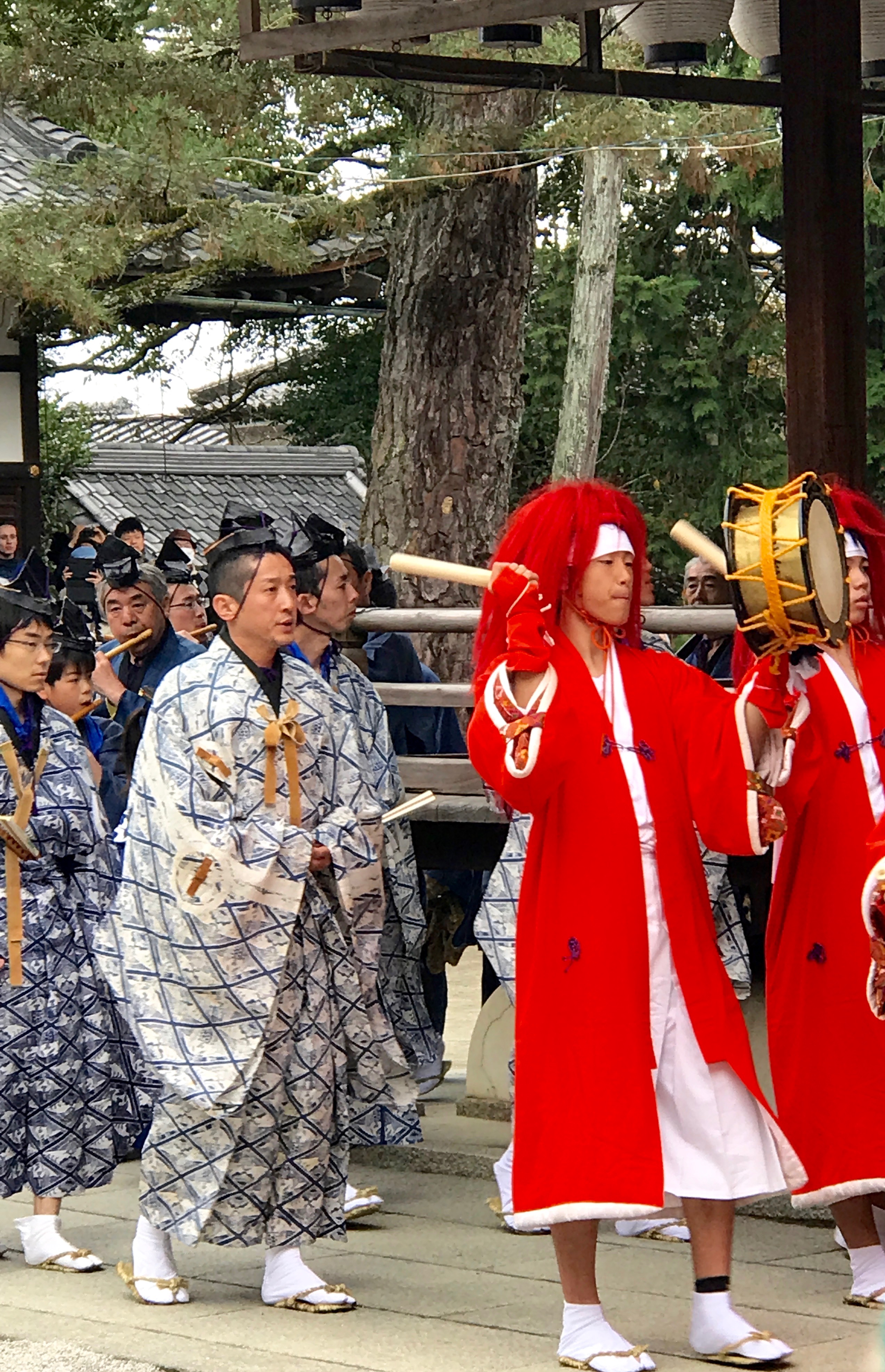 Following the performance in front of the main building of the shrine, we were all blessed by the head priest.  I felt a strong sense of community in receiving that blessing even though I could not understand the words. I was happy to be in the crowd and receive the blessings. 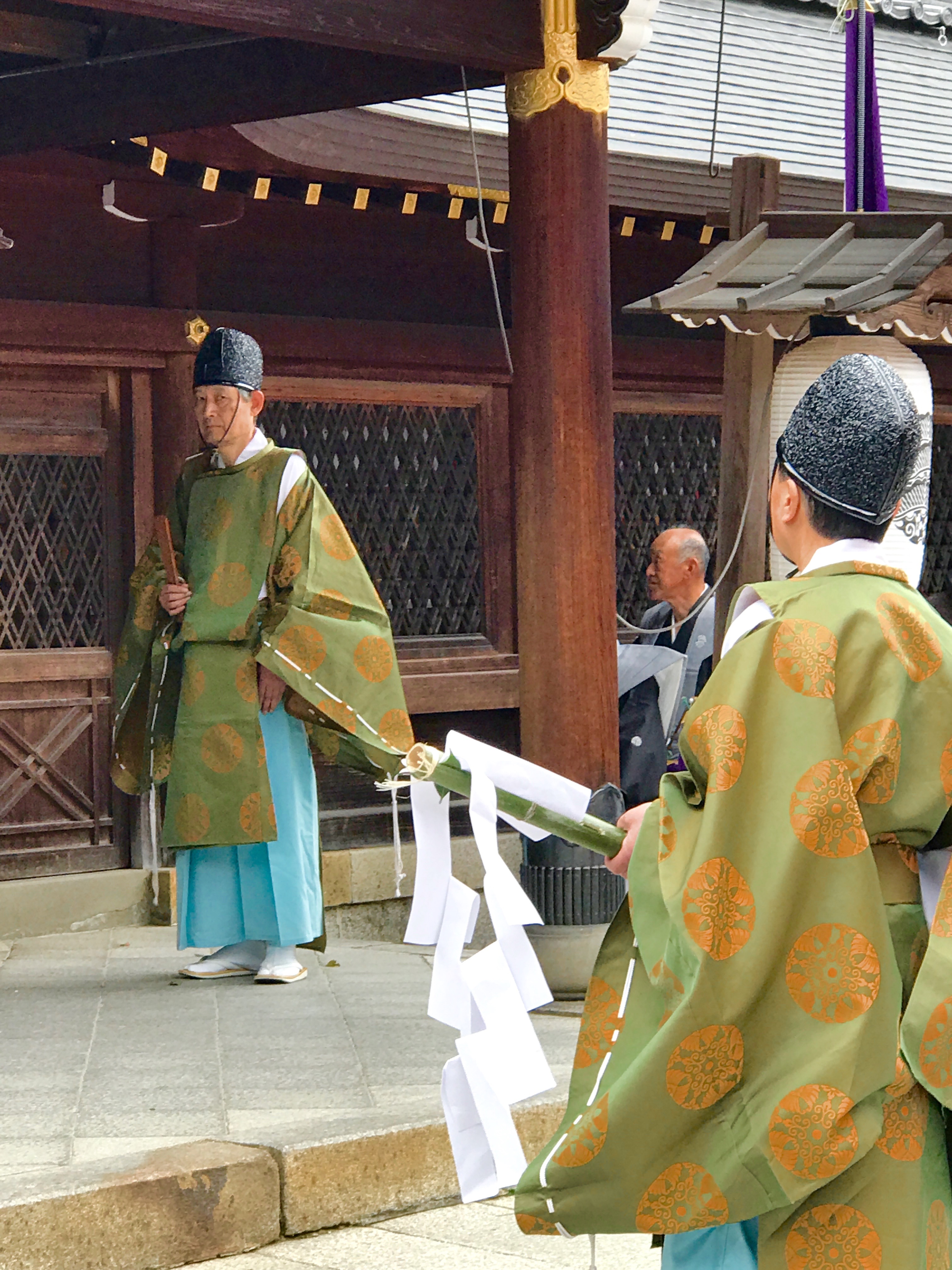 It’s a mystery, but since leaving the Yasurai Festival, I have felt more energy and fewer asthma symptoms than I have had for many months.  Amen. 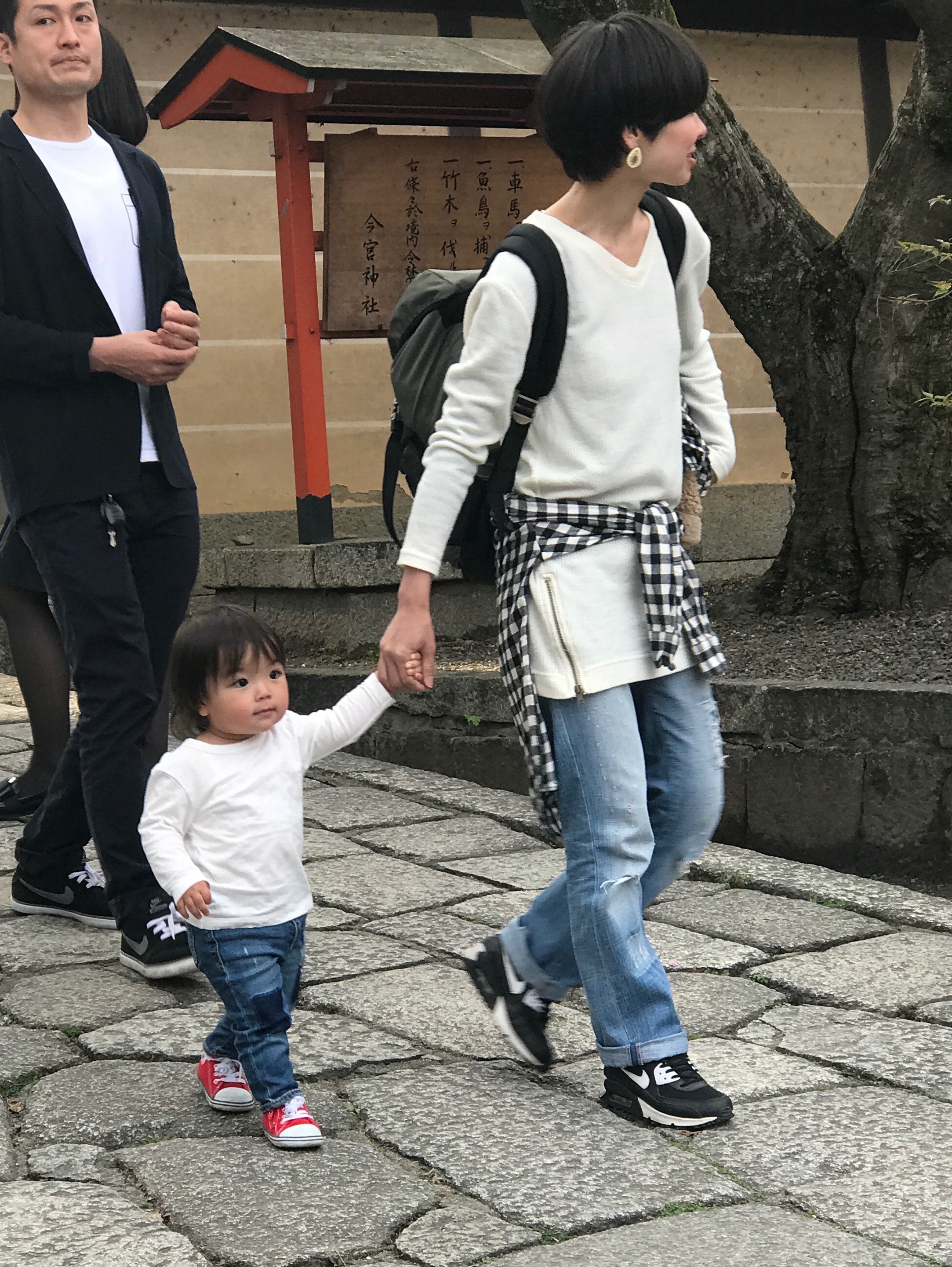