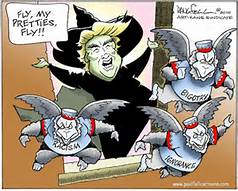 Growing Up in the 1950'sAgingPoliticsHumanity

My own awareness of racism in America and within myself awakened very slowly.  I still harbour some shame about that unconsciousness and unconcern that existed within me. Current times bring that personal history all to the fore and require not only national re-examination but personal soul searching as well.

The city I grew up in had a very small population of poor black factory and domestic workers.  As I remember, I never encountered students or teachers of other races all through my public education.  The only black person I knew was a middle-aged woman named Ella Mae who had moved to Mass. from Ga.  She cleaned my parent’s house once a week and cooked legendarily good sweet potatoes for us at Thanksgiving. I never asked her about her life.

My parents referred to blacks as many first generation American Jews did at that time as “schvartzes.” I knew it was a vaguely derogatory term but never questioned it until years later.  It is the only German or Yiddish word for black, but there is no doubt in my mind that what might have begun as a language issue for new immigrants to America, continued long past its expiration date.

I attended a segregated college in Florida in 1958.  I paid little attention to that fact, other than to think it was odd to see water fountains and restrooms  labelled “black” and  “white.”  I thought it odd that blacks should have to sit in the back of the bus. The pain and humiliation that ruling caused them never occurred to me either.

I was in my early 20’s when the civil rights movement took center stage.  I watched the evening news on television with horror at the ugly confrontations happening in the South, but never thought to put my own self on the line to join a demonstration.  I felt distanced from the struggle, never passionate about the struggle.  Years later, I felt ashamed of myself and wondered what critical ingredient I lacked that kept me from joining the struggle?  I honestly cannot say.

I did experience so

me anti-Semitism growing up, but not enough to be badly stung by it.  I discovered that some non-Jews I met acted as if my Jewishness was something rare and exotic.  While living in the South, when someone told me they were surprised at learning I was Jewish, I thought that they’d expected to see someone with horns coming out of their head.

When we lived in the South and my children attended an integrated school, any hopes I had for more social integration quickly disappeared.  My kids had 2-3 years of schooling before entering first grade.  For almost all the black kids, first grade was their first school experience.  It was practically an impossible gap for these kids to overcome.  They were segregated in their classrooms from the first day of school.

I did pay pretty close attention to civil rights over ensuing decades.  Until recently, I had convinced myself that most civil rights issues of import had been resolved. Recent issues of police violence and incarceration have convinced me otherwise and brought me to understand that I’ve been very out of touch.   I can never completely identify with the daily indignities blacks are subject to, nor can I walk in their shoes, but I can’t afford the self-deception that their indignities don’t affect me.

Now, the demons have climbed out from under their stones. Their lives must have been sad and difficult to go there in the first place. The haters are revelling in the spotlight again, spewing their irrational and toxic bile.  They threaten our foundations of civility and respect.  Their behavior gives rise to serious questions for me regarding freedom of speech.  Last night I watched a CNN senior reporter reduced to tears by the current situation.  I was shocked by his pain, at least ten times stronger than anything I felt, which was mostly anger.

I used to think that something like the Holocaust could never happen here.  Now, I’m no longer certain.  One out-of control-lunatic is now president of the United States mouthing nonsense and rage on a daily basis.  The far right whatever-they-are nutcases have found a champion.

I think these times demand that each of us do some soul searching.  I’ve come to realize that if I’m not part of the solution, I’m part of the problem.  There’s an opportunity here for more action that will counter the ill will being spread.  It most likely will not take place for me at a demonstration, but I’m determined to find a way to counteract my years of unconsciousness that might make up for lost time and might now make a difference.