Meanwhile, Only in Japan at Takarazuka

Who and What is Takarazuka??

Yikes!  This really exists! (for full affect, do watch the videos.)

Part of what endears Japan to me is the seemingly never-ending discoveries to be made at both ends of the spectrum from the sublime to the ridiculous.  A few days ago we travelled out of Kyoto to attend a performance of The Takarazuka Revue. I’d known about Takarazuka for years, but this year I got reservations as soon as we got to Japan.  It didn’t disappoint.

YOKOHAMA, Japan — On any given night outside a theater in central Tokyo, hundreds of women can be found waiting in neat phalanxes, dressed in matching T-shirts or sporting identical colored handkerchiefs — the uniform of what may be the most rabidly loyal fans in Japanese entertainment.

The stars they’re hoping to glimpse are women, too, actresses who play both male and female roles in the 102-year-old Takarazuka Revue, an enduringly successful theater company.

Founded in 1914 by a railway company that hoped to lure travelers to a struggling hot spring resort outside Osaka, the group began with a handful of teenage singers and dancers and staged its first performances in a converted swimming pool. A century later, Takarazuka operates five sub-troupes and puts on 900 shows a year, in company-owned theaters in Tokyo and its original western Japanese base. Most of the shows sell out.

Cross-dressing, single-gender theater groups have a long history in Japan.

Takarazuka could not be more Japanese. Training is rigorous and the troupes are strictly hierarchical, with designated “top stars” and ranks of junior performers. Rules are strict and extend beyond the stage: Members are not allowed to marry and often “retire” in their late 20s or early 30s. The most popular make the transition to mainstream acting or singing careers.

By putting women in male roles, Takarazuka is aiming less for transgression or social rebellion than for an added level of escapist fantasy. Its members’ duty, Ms. Mine said, is to be “fairies selling dreams,” onstage or off. “You can’t have the smell of a real life about you.”

Despite its Western trappings, Takarazuka draws on “ideas of purity that are very primitively Japanese,” Akio Miki, a veteran Takarazuka director, said. They show up in its productions and in the way the company — whose official motto is “modesty, fairness, grace” — regulates its performers’ private lives.

“It’s an idealized male image, seen through women’s eyes: The heroes are more romantic, more divine,” he said. “They don’t tend to lie or cheat. It’s what the audience would like from men but doesn’t usually get in reality

Before becoming a member of the troupe, a young woman must train for two years in the Takarazuka Music School, one of the most competitive of its kind in the world. Each year, thousands from all over Japan audition. The 40 to 50 who are accepted are trained in music, dance, and acting, and are given seven-year contracts. The school is famous for its strict discipline and its custom of having first-year students clean the premises each morning.

The first year, all women train together before being divided by the faculty and the current troupe members into otokoyaku and musumeyaku at the end of the year. Those playing otokoyaku cut their hair short, take on a more masculine role in the classroom, and speak in the masculine form. 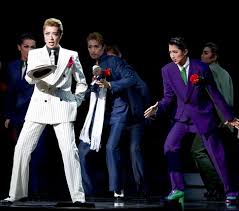 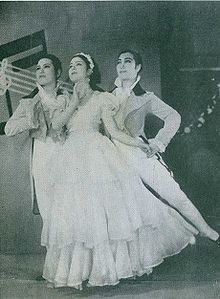 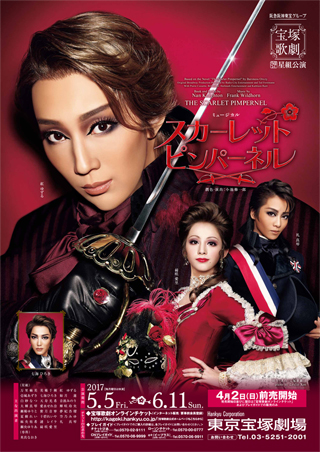 While on the surface it would appear that the Takarazuka Revue was intended to grant Japanese women freedom from social oppression, ironically, it began as quite the opposite. According to Takarazuka scholar Lorie Brau, “The production office and corporate structure that control Takarazuka are overwhelmingly patriarchal.”[5] Although Takarazuka embodies Shiraishi’s idea that the actresses become “good wives and wise mothers” upon leaving the company, it also simultaneously represents progressive feminist points of view. Some believe that its appeal to the female audience is on account of the perceived link to freedom from traditional Japanese society’s imposed ideas of gender and sexuality. So while Takarazuka “reinforces the status quo and sublimates women’s desires through its dreamy narratives, there remains some possibility that certain spectators find it empowering simply to watch women play men.”[5]. 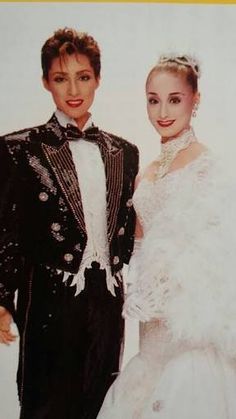 The otokoyaku represents the woman’s idealized man without the roughness or need to dominate, the “perfect” man who can not be found in the real world. It is these male roles that offer an escape from the strict, gender-bound real roles lauded in Japanese society.[5] In a sense, the otokoyaku provides the female audience with a “dream” of what they desire in reality.

In addition to their claim to “sell dreams”, the actresses of the Takarazuka Revue take on another role, empowering themselves as women in a male-dominated culture. Kobayashi’s desire to make his actresses into good wives and mothers has often been hindered by their own will to pursue careers in the entertainment business. It is becoming increasingly more common for women to stay in the company well into their thirties, beyond the conventional limits of marriageable age. The actresses’ role within the Takarazuka Revue thus overlaps into the culture surrounding it, adding to their appeal to the female-dominant audience. “In fact, it is the carrying over of this ‘boyishness’ into everyday life and the freedom that this implies that captures the attention of some fans.”

In terms of sublime, The Takarazuka Revue hits the nail on the head for sublime camp, according to these Western eyes.  It appears as a crazy combination of the Rockettes, the Zeigfield Follies, the Follies Bergere, the June Taylor dancers, Las Vegas nightclub, and gay costume designer let loose.  And Port de bras too numerous to mention.

The 4000 seat special theatre was sold out for the 11AM show we attended.  The almost 100 members of the cast perform with a live orchestra.  The choreography is straight from the 1950’s, lots of old-time jazz steps, combined with a few ballroom moves, contrived fight scenes and overwrought drama with a touch of Liberace thrown in for good measure.   The audience sat is rapt attention.  We appeared to be the only foreigners in the audience.  I had to restrain our guest from laughing out loud, because it did not appear to me that anyone else but us found humor in what was presented before us, although by US standards, some of it could have easily been a skit on SNL.

I left the theatre, al little confused, more than a little amused, and thinking “Only in Japan.”