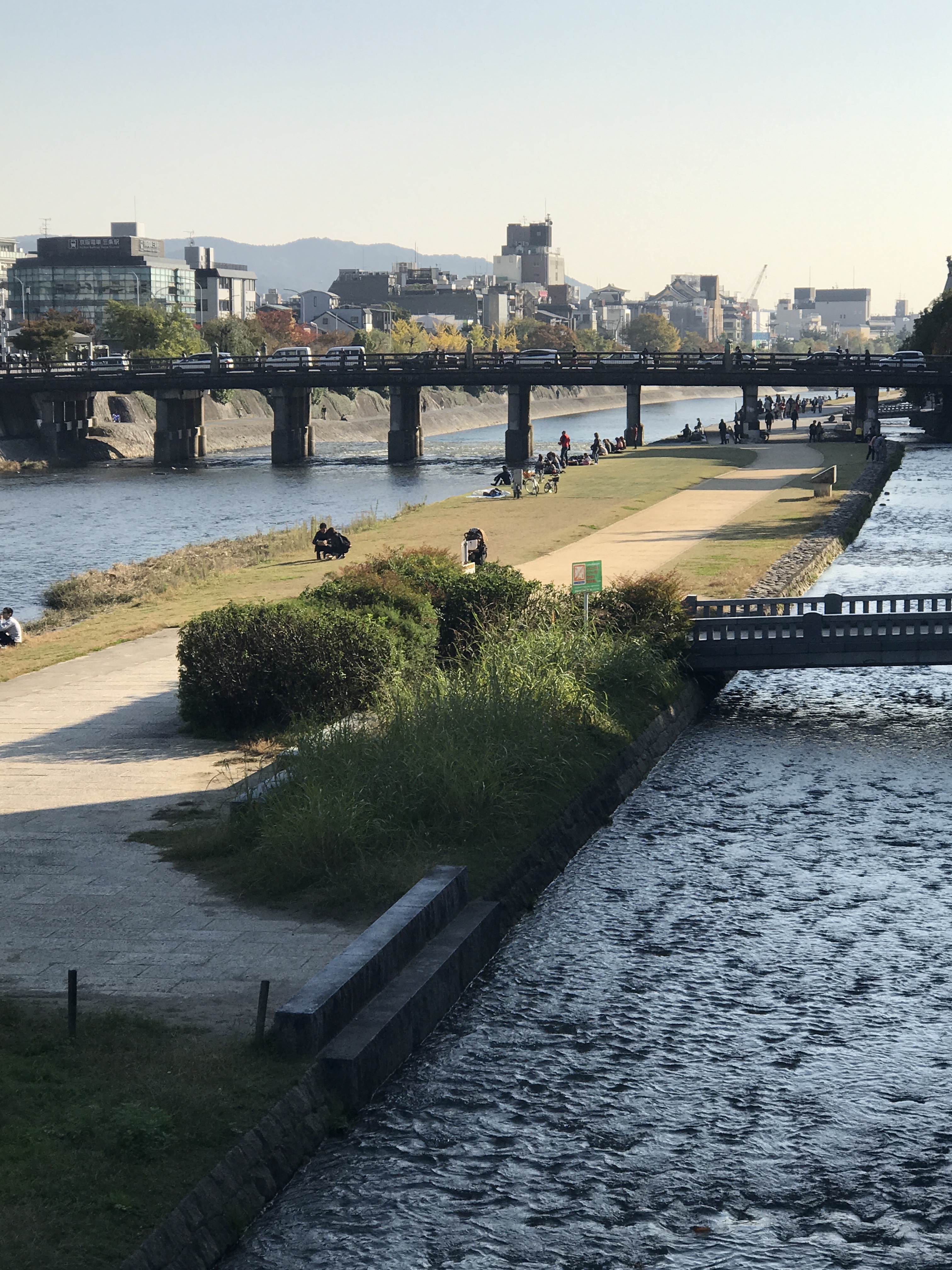 Less than Two Miles in 4.5 Hours

When Danny suggested that we walk to an antique store we like to visit here on the opposite side of town, it seemed like a fine idea.  The weather was mild, the mid-November sun warm and inviting.  And we both could use the excercise.

Taking an A to B walk in Kyoto is hypothetically an easy thing to do.  The city is laid out on an simple grid, the terrain within the city is flat.  That does NOT factor in all the distractions along the way.

So it was that a walk that could have taken us less than an hour, not pushing it, took almost 4.5 hours to complete.  One way.

Let me take you along the route. We headed west towards the lovely Kamogawa River.

We passed a small shop selling the most prized of seasonal vegetables:  the Mazsutake mushroom. 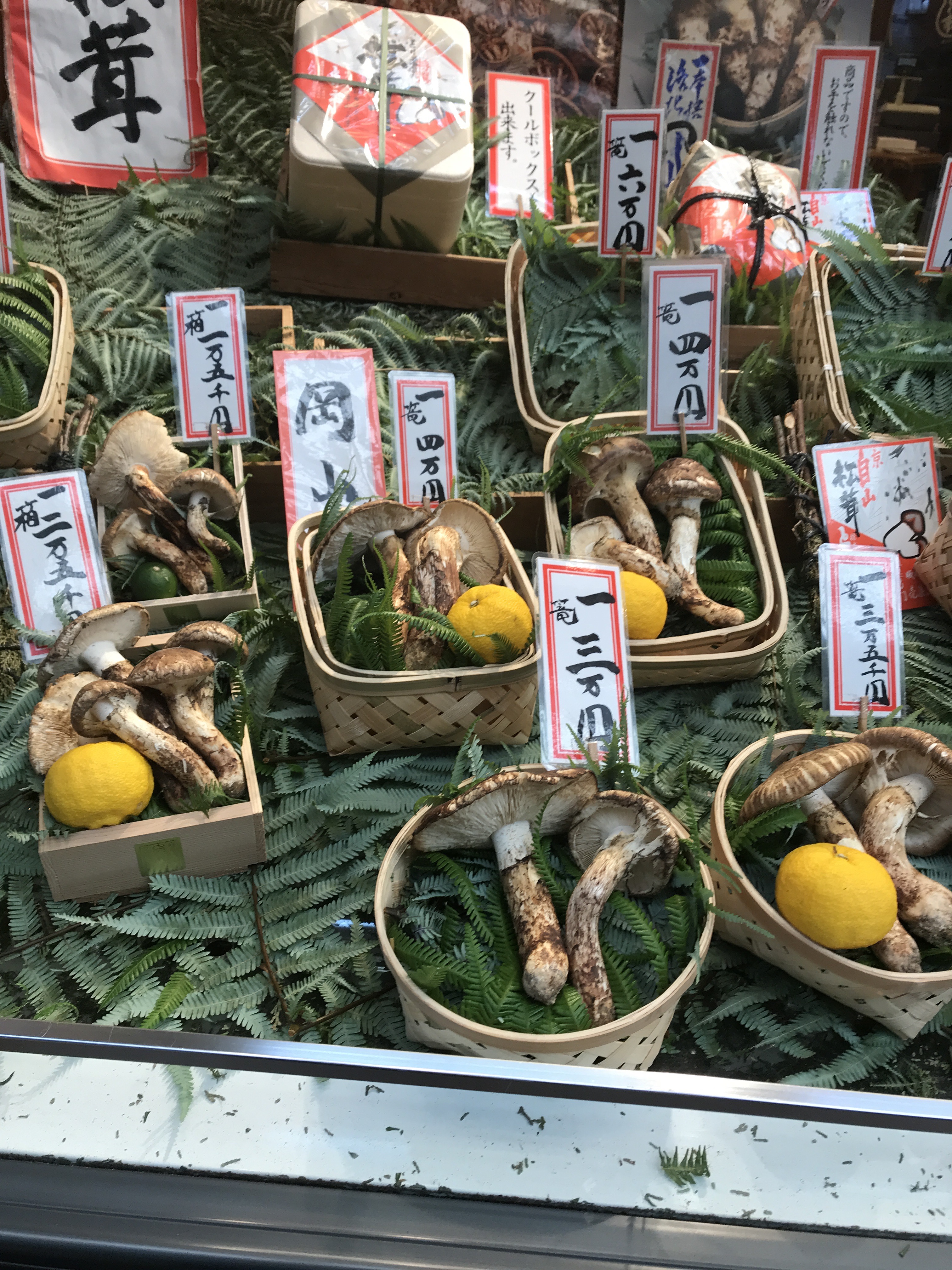 In the window of a busy shop a dog and its owner are committed to forever climb a flight of stairs. 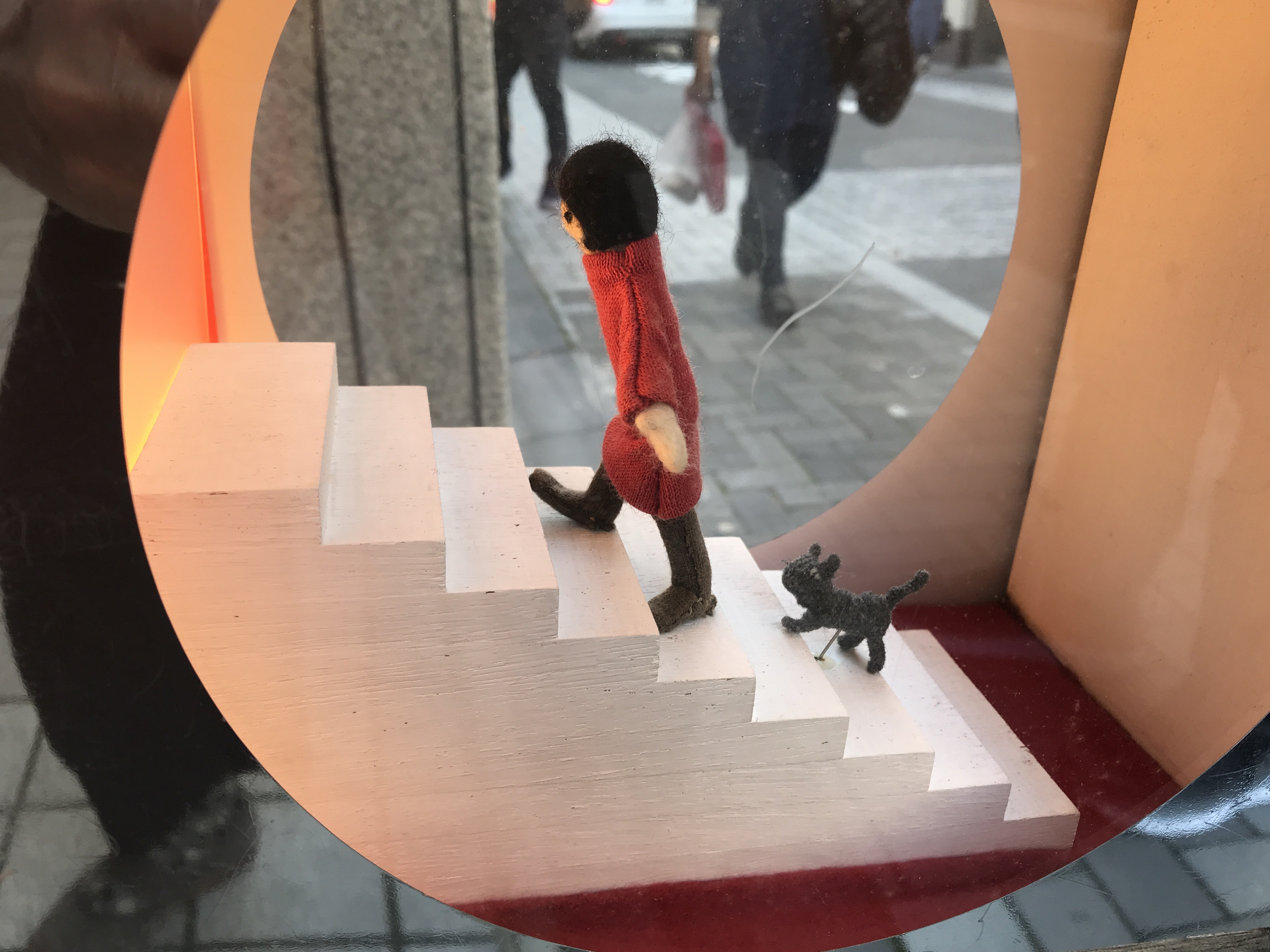 We soon discover that temple gates that are usually closed on Teramachi are open today.  Let’s check it out.  It’s not one of the “biggies” and neglected by tourists, so we have it to ourselves.  It’s hundreds of years old, rebuilt, burned down and rebuilt, like many others.

The only other visitors are grandparents showing their young granddaughter the ropes. Bad but irresistible pun intended.  The rope is attached to a clapper that is rung to get the attention of the deity.  At the altar, bow twice, clap your hands twice, and then bow once to pray. … ・Ring the bell to greet the deity. 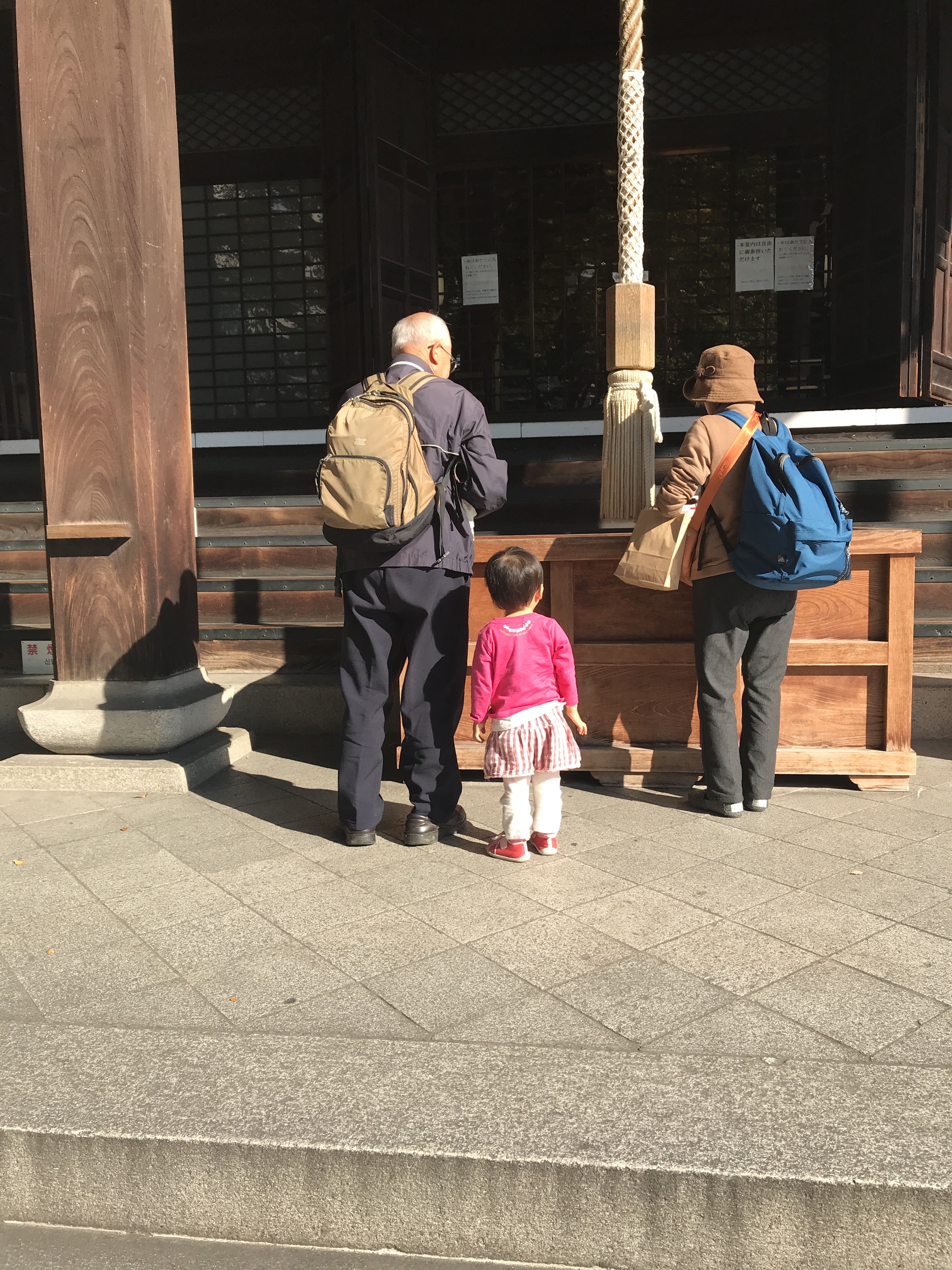 It’s strictly forbidden to photograph the interior icons of most temples and this time as most times, I mostly follow the directions.  Possibly because it would be too easy to cheat since no one else is around us. That’s a bad show of untrustworthiness. I can imagine a hidden camera somewhere scanning for those too easily tempted.  Then I ask myself, how sacreligious could it be to photograph one of the imposing light fixtures?Answer below. 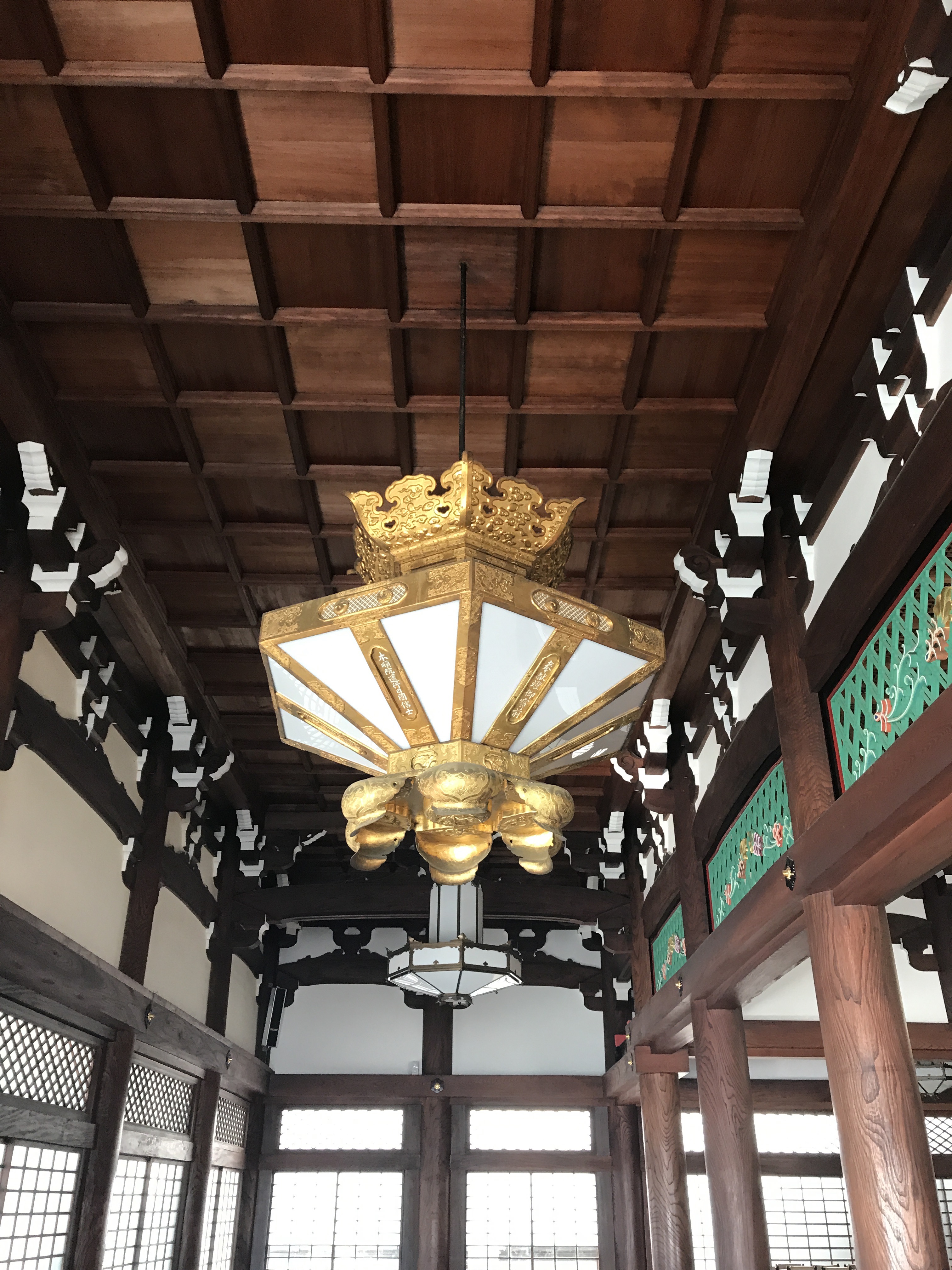 An ancient ginko tree is enshrined on the grounds, wrapped in a tired-lookingshimenawa.  We pause to admire it, of course.  Judging from the size of it, I guess that this tree has been here for hundreds of years as well.  An imposing and revered survivor. 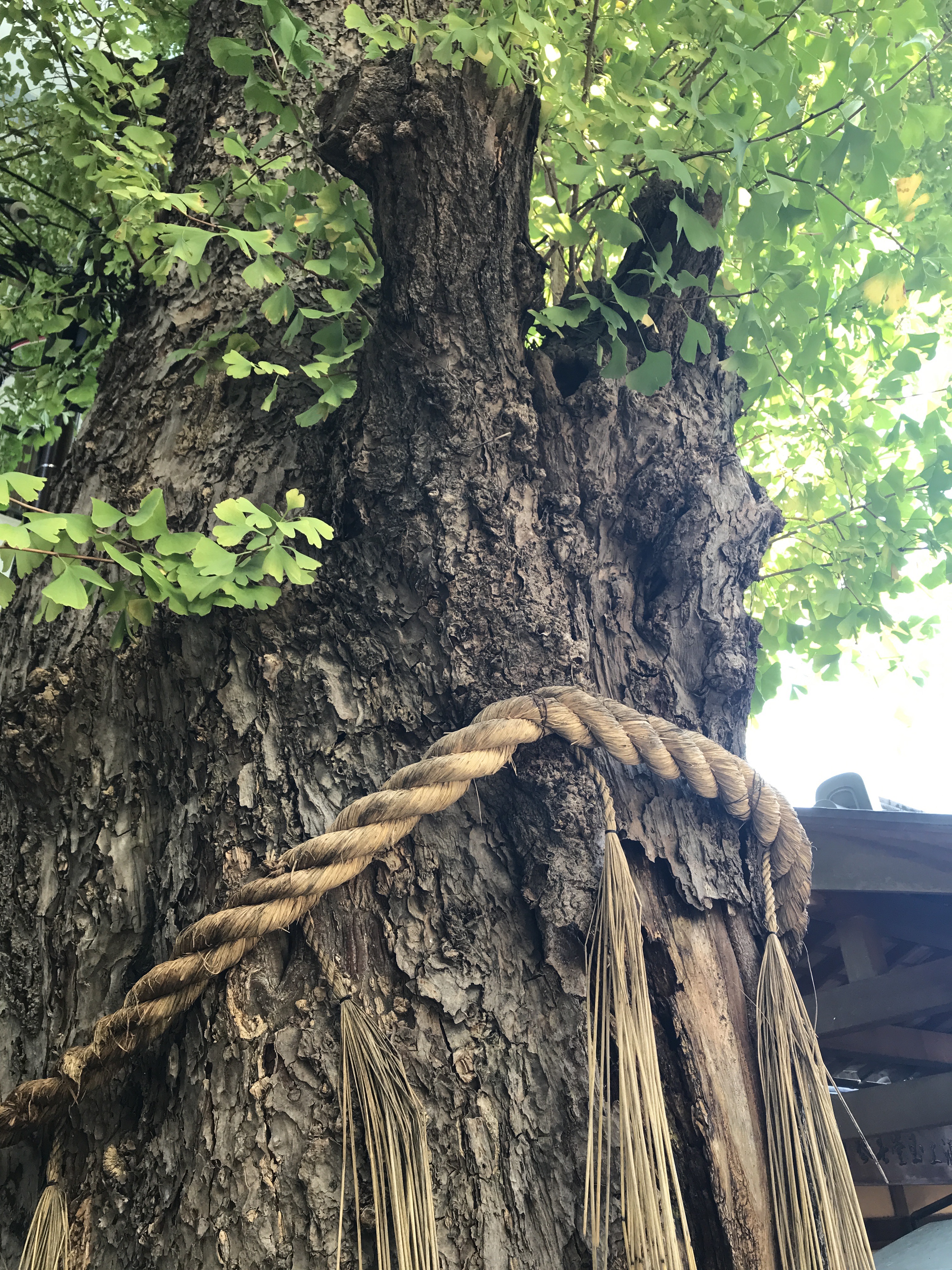 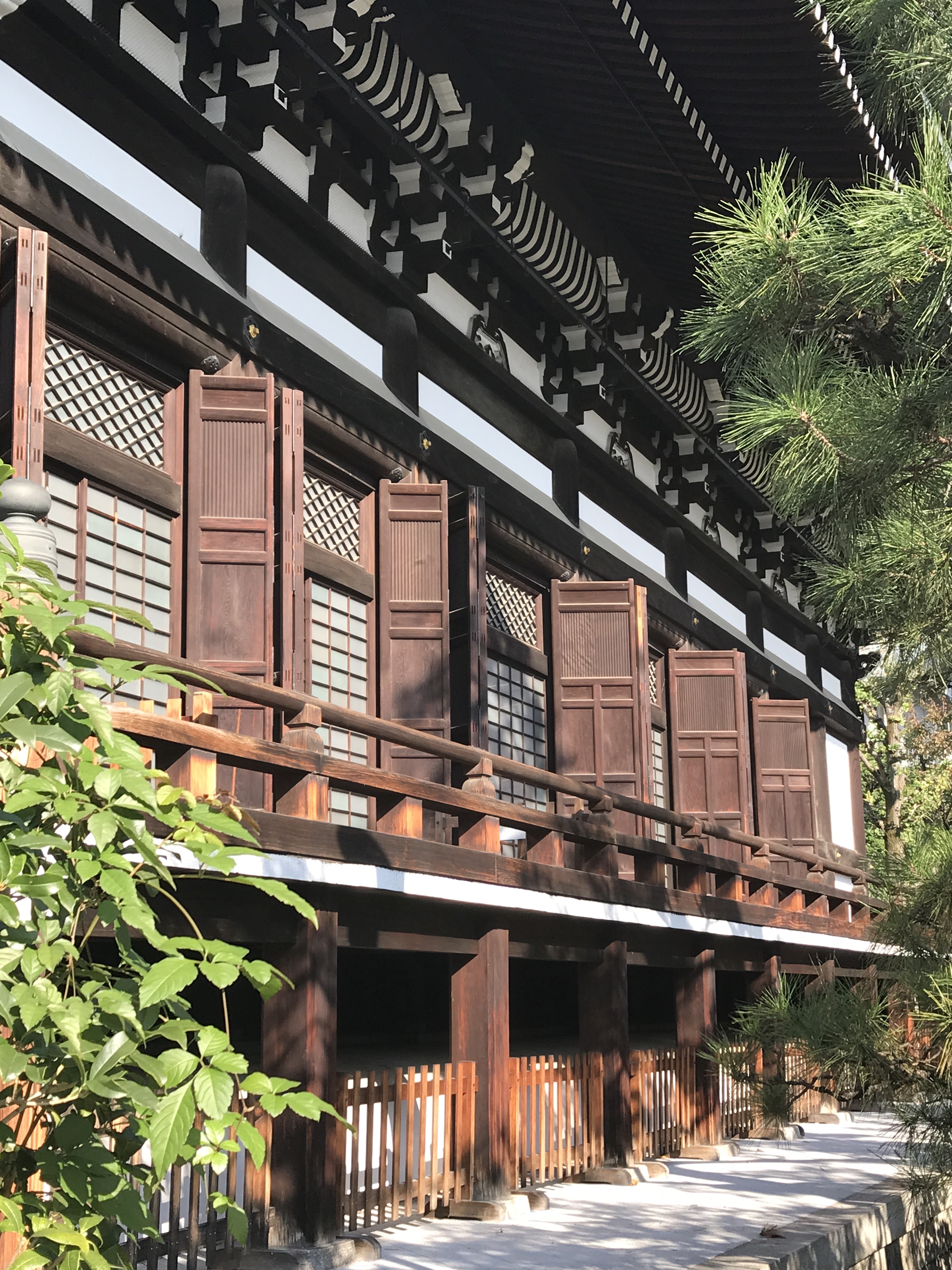 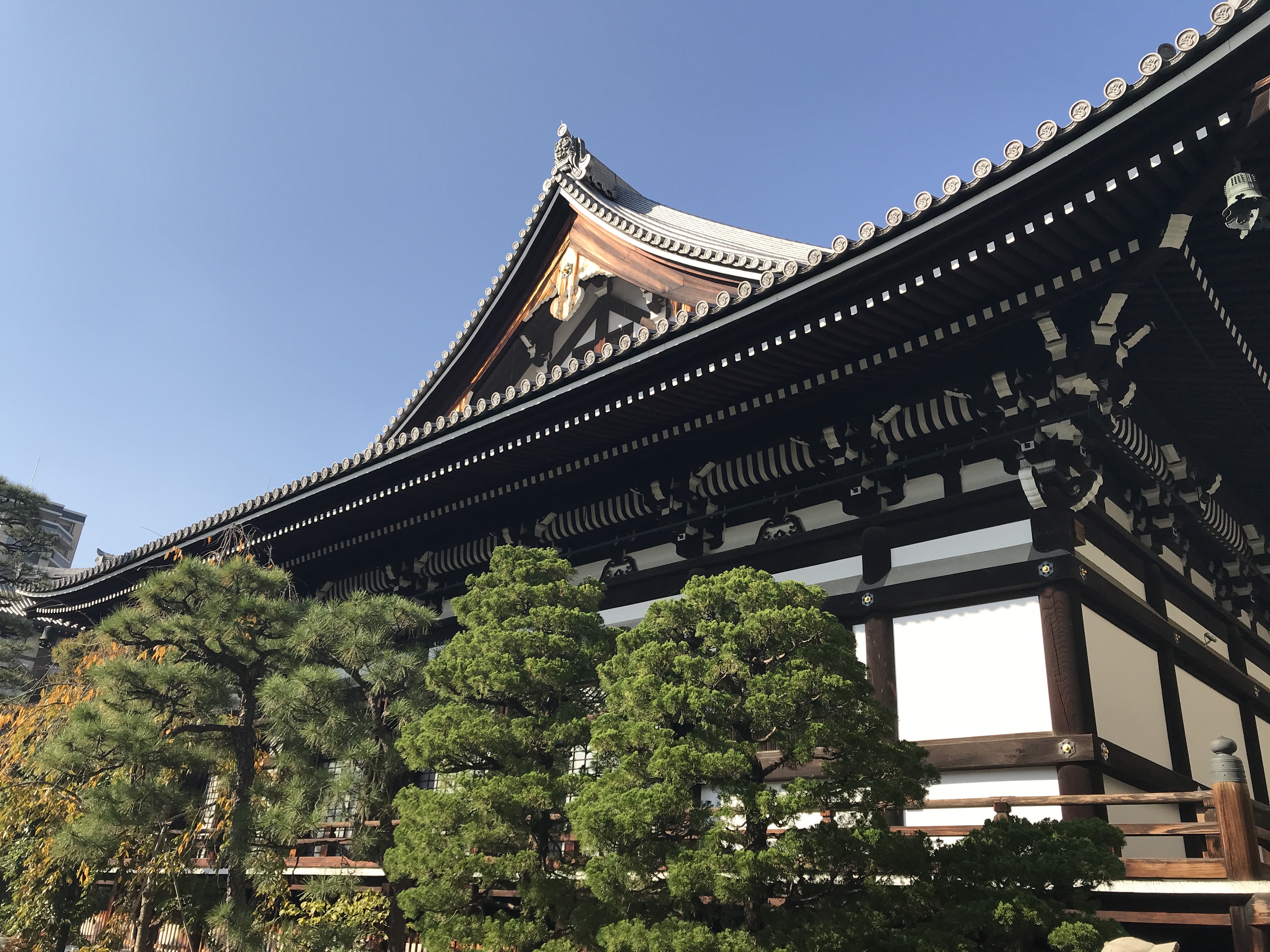 Moving slowly along, we approached a group of young children just let out of school with their moms. The kids were in high spirits, playing with each other as the moms chatted. Suddenly one lively boy broke away from his mother as they approached the busy intersection. He was gleeful. His horrified mother screamed for him to stop. Until he did we all held our breath. 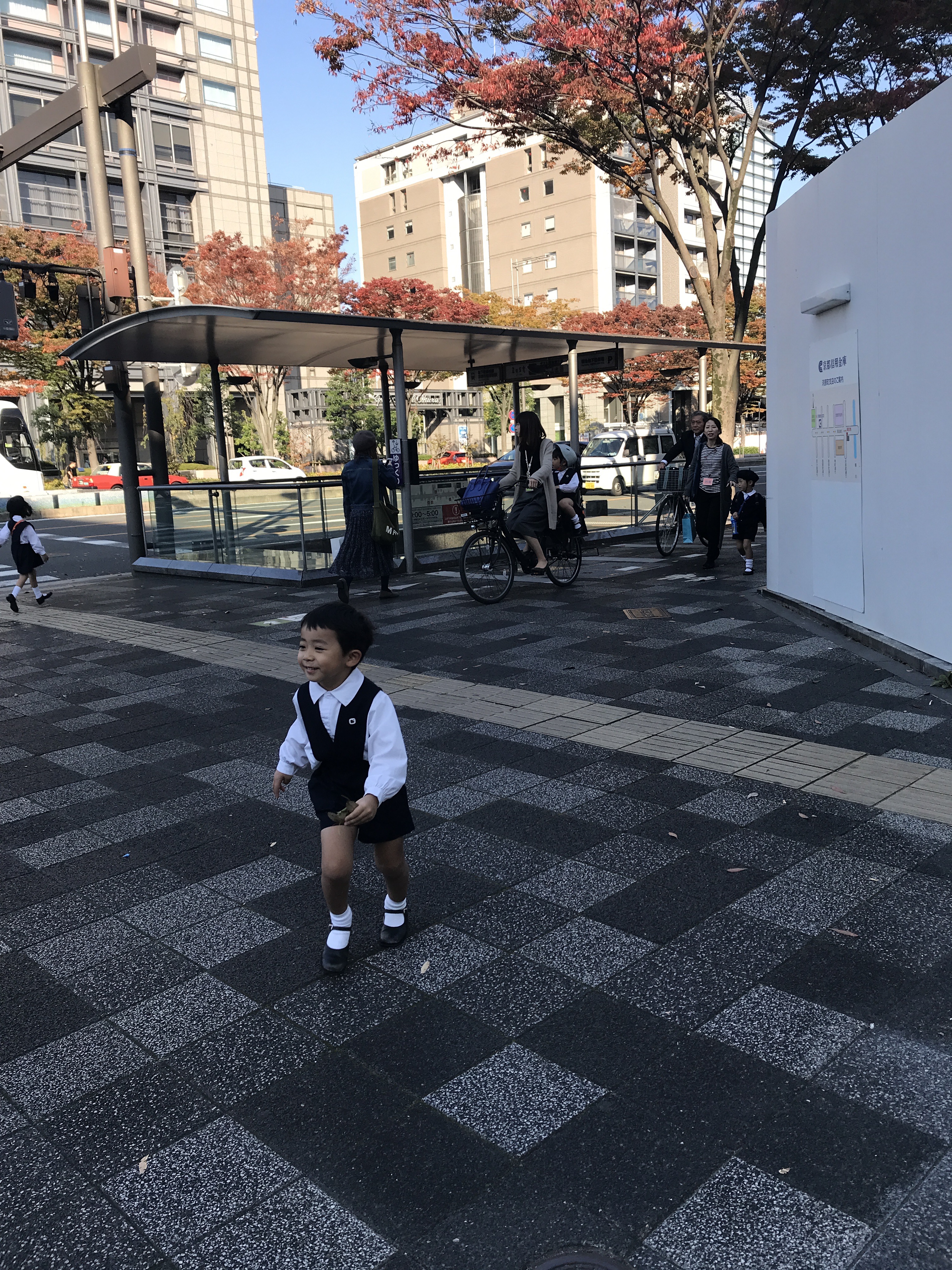 As we crossed the intersection, I was drawn to the striking and poignant difference between youth and old age. 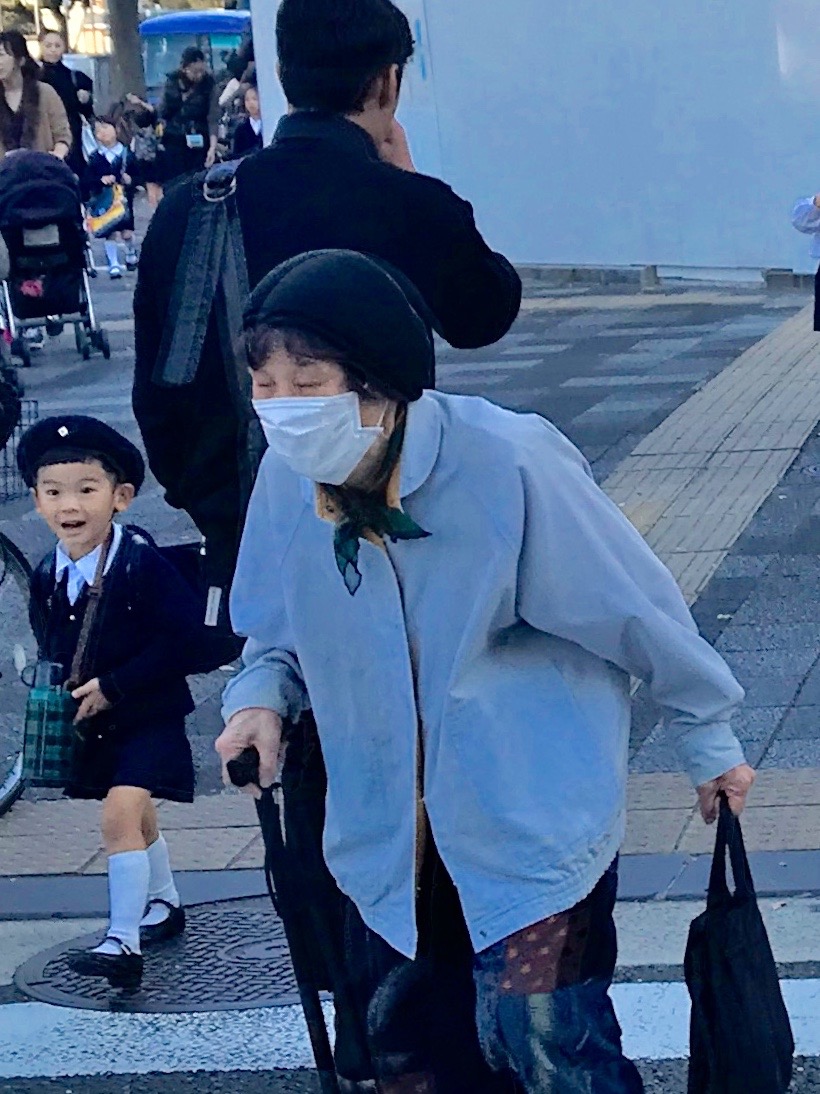 Following this bit of excitement, we crossed the river,noting the irresistible draw of sitting on the river banks on a nice day with a friend or lover.
What’s an afternoon walk without a tea and cake break? We were in a rather bland neighborhood and came across a rather slick coffee shop in a restored machiya. We ordered an apple desert to go along with our tea, but were blown away when after a longish wait, one of the most sophisticated deserts I’ve ever had appeared from the kitchen! The little brownish packets were like small apple pies.All delicious of course. 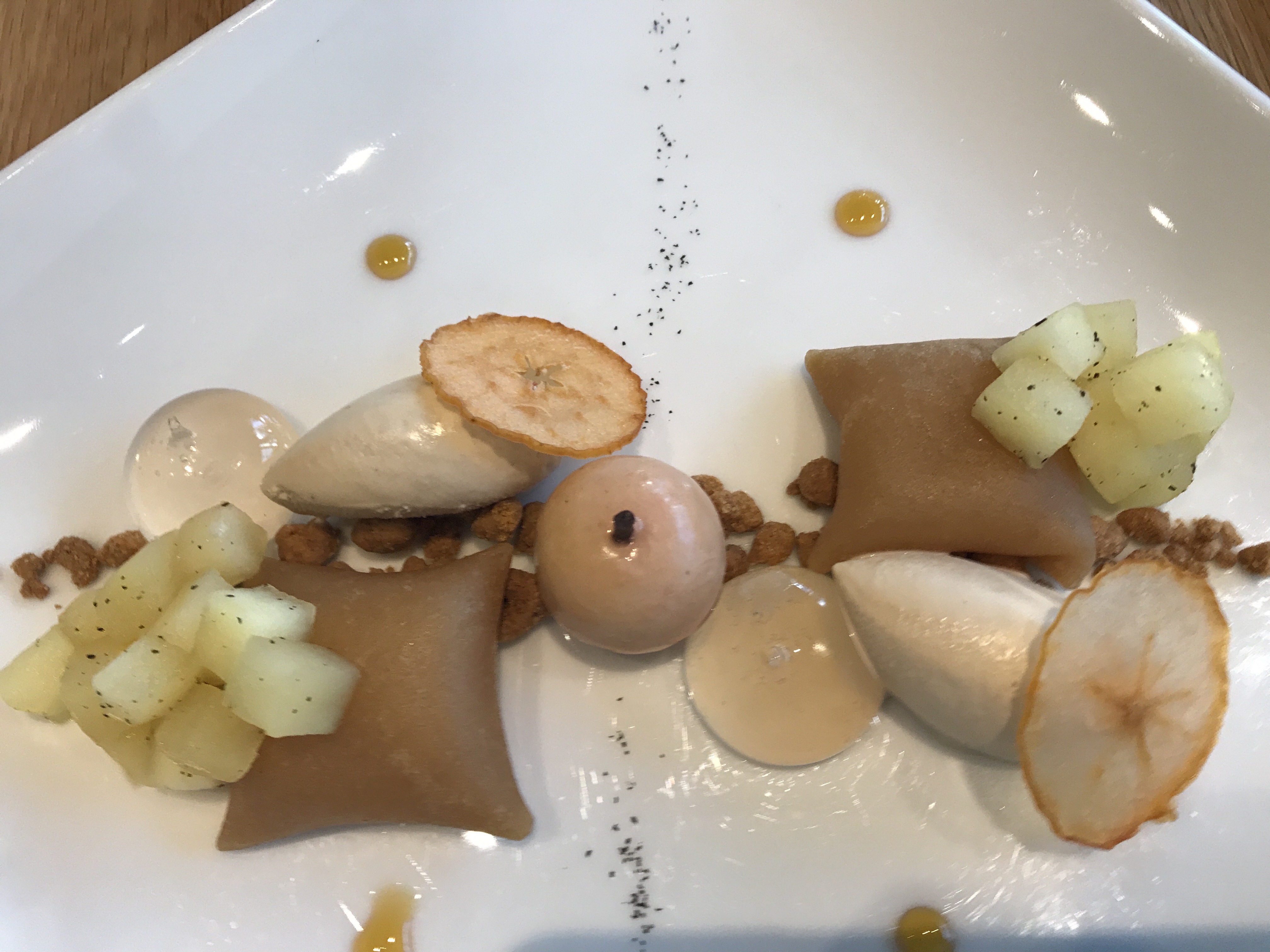 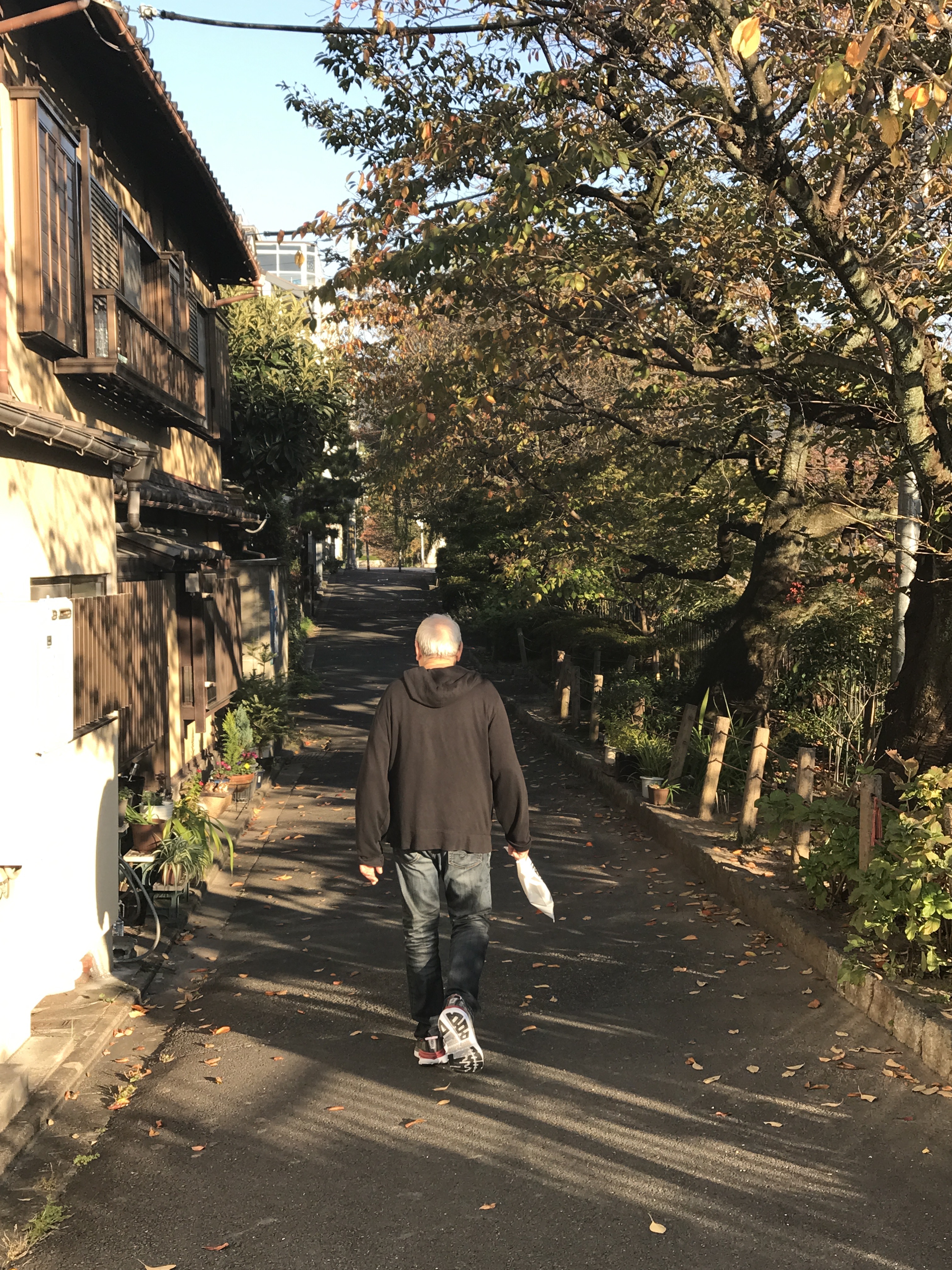