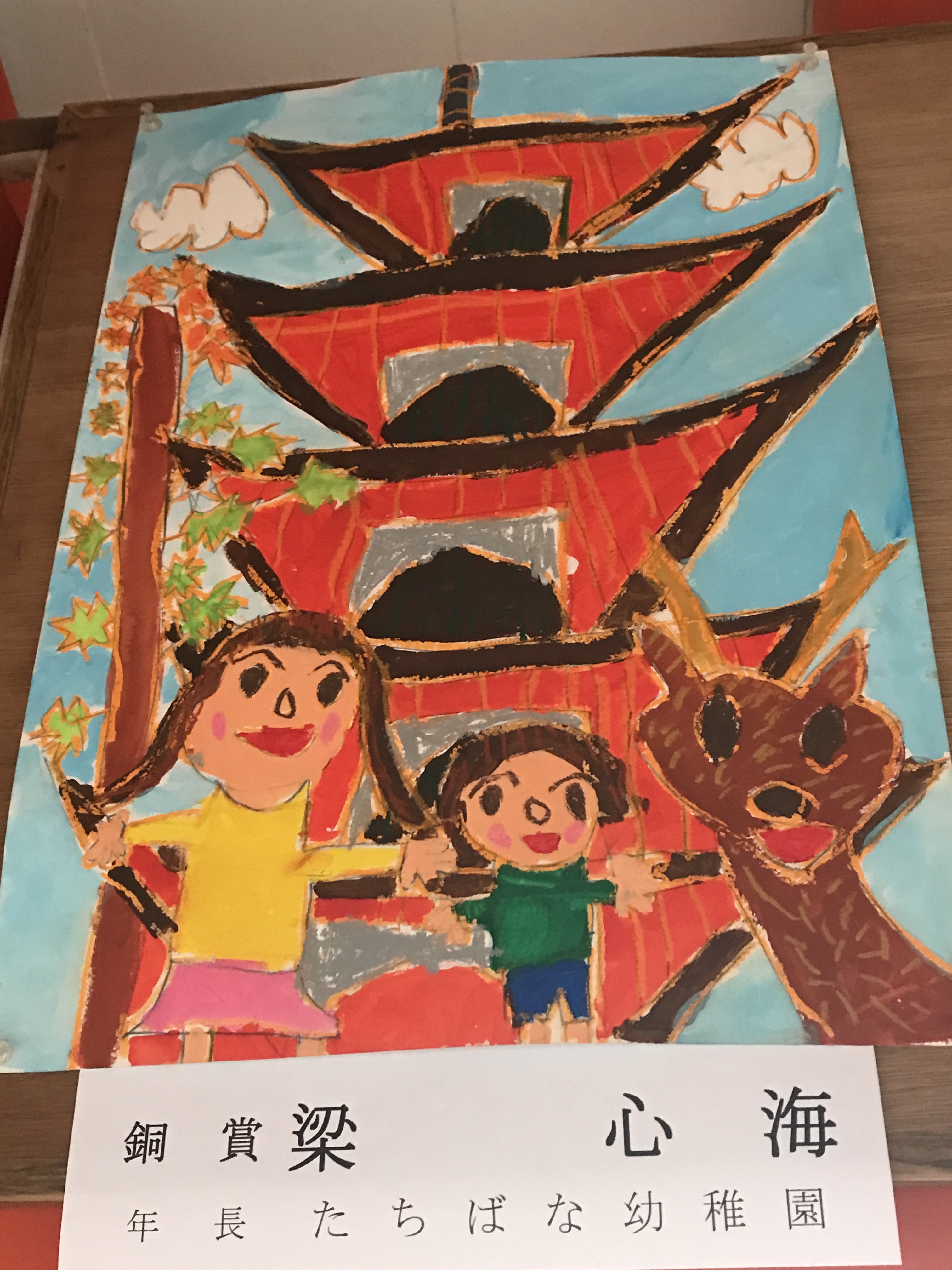 Tourists Be Gone! Children Can Stay.

After almost four weeks here, we finally tore ourselves away from the allure of Kyoto  Several Kyoto friends seemed surprised that we had never been to Hiroshima and the close by ancient and celebrated shrine on the island of Miyajima. It was a relatively simple overnight trip that easily met our expectations,  once the crowds of other tourists had departed.

Most  experiences in Japan translate easily to other cultures.But every now and then, we come across something here that we just don’t “get.” We approach it eagerly and depart from it just a little bit baffled, telling each other, “you must have to grow up Japanese.”

When we set out to see one of the three all time great scenic sites in Japan, I was slightly apprehensive because years ago at another much-lauded scenic site, we left thinking maybe we hadn’t really been in the right place because we remained unmoved. That was Amanohashidate.

This time we headed for the nearby island of Miyajima, to see the ultra scenic site of the floating (at high tide) Torii gate. We’d done our homework and stayed overnight so we could see the shrine without the throngs of day visitors who finally depart the island when the last ferry leaves.
We initially saw the Torii as our ferry approached the island.Soon after landing and eager to see the icon at closer range, we walked over to check it out. We were not alone, but just two of many hundreds of like-minded tourists. We quickly determined to return when we had it more to our selfish selves.

The Floating Shrine on the Sea

The shrine has more than 1400 years of history, and is a registered World Heritage Site. The vermillion lacquered shrine, located at the beautiful Itsukushima, fits well with the Prussian blue sea, and the green of the virgin forest, recreating the elegance of the Heian era. Many visitors from all around the world continue to visit.

From ancient times, people have sensed the spiritual sanctity of Miyajima, and have revered and worshipped the island itself as goddesses. The main shrine is said to have been constructed in 593 by Saeki Kuramoto.
It is believed that the goddesses chose this island because an enclosed bay was sought for the site of the shrine. 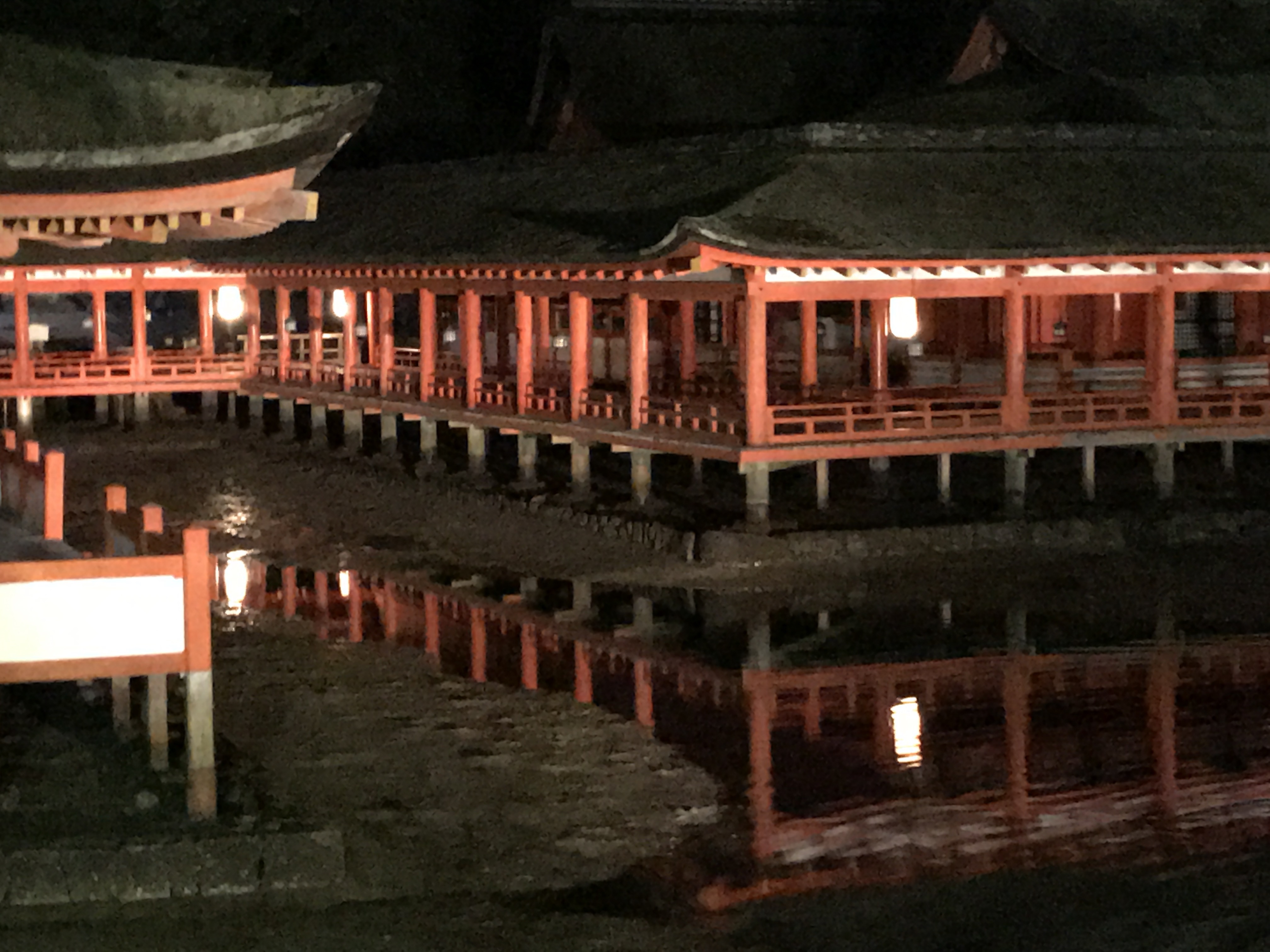 Night-time views. The crowds are gone. 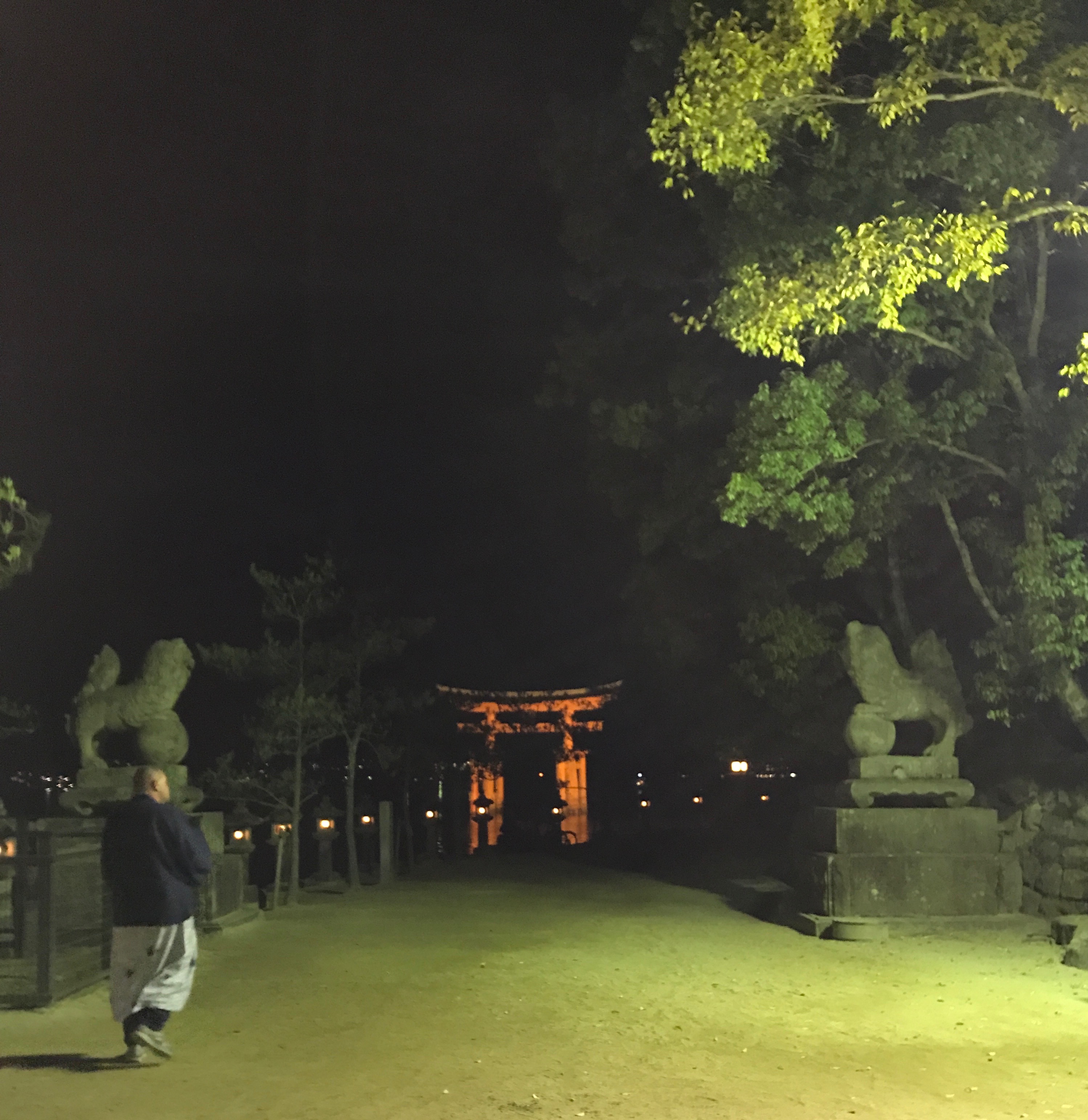 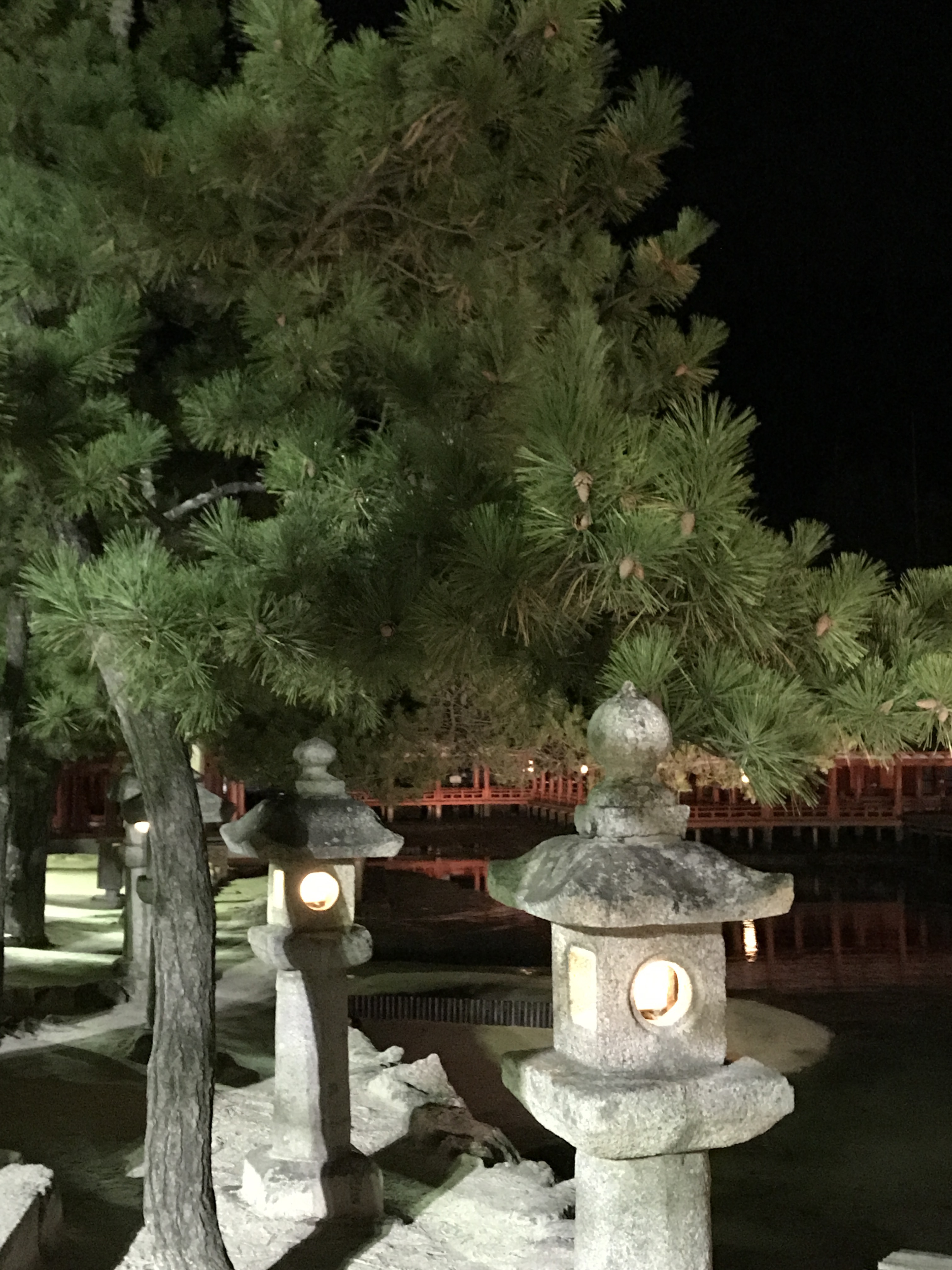 The first opportunity to revisit the shrine was that evening. We overheard plots from other visitors to come back at sunrise. After a brief struggle to get out of bed, we returned in the early morning, just as the morning haze was burning off. The payoff was great. Visitors were few. We had this ancient wonderland to ourselves.
The rambling corridors standing on the water that we traversed seemed like a version of Shangri-la. 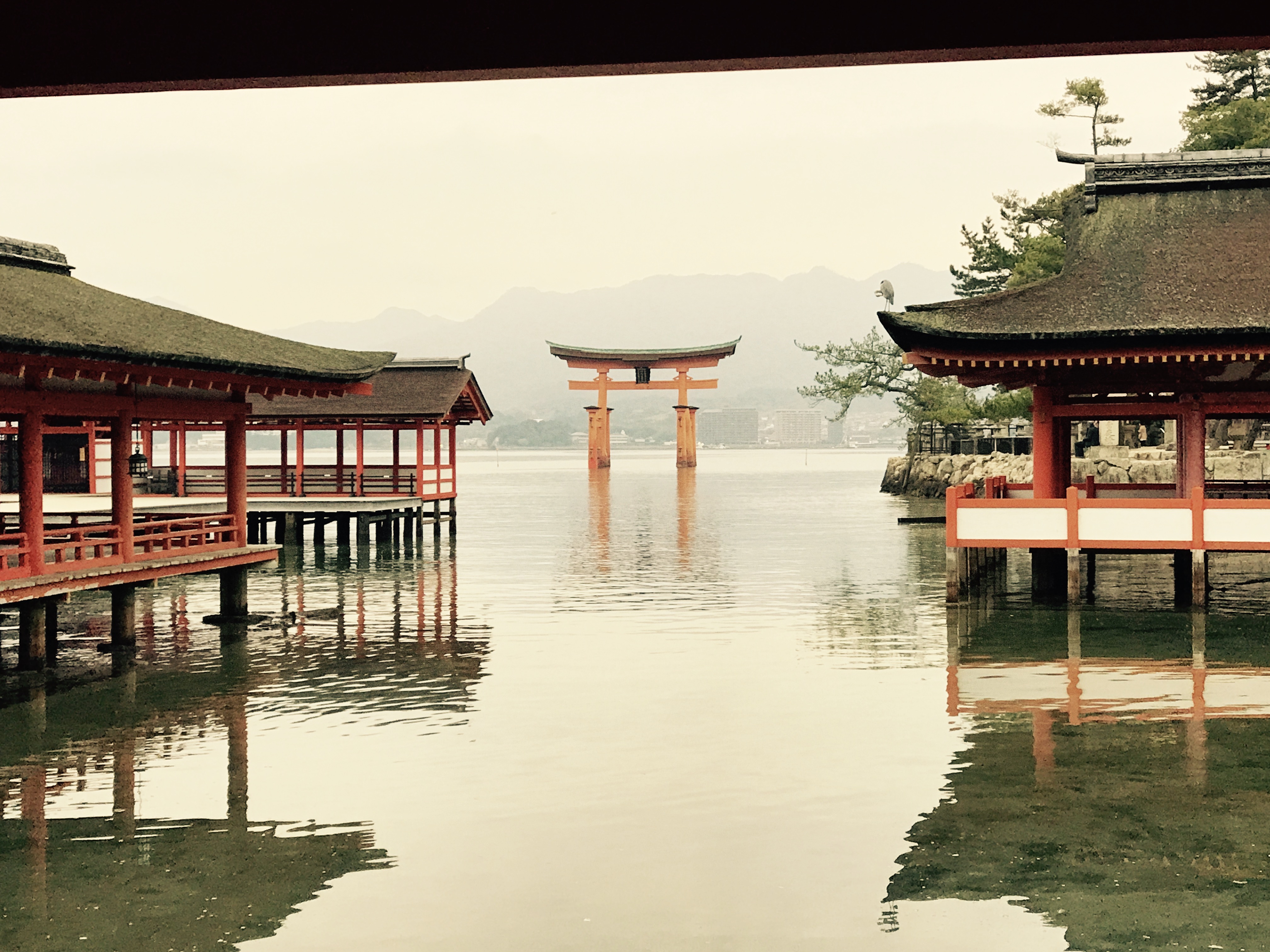 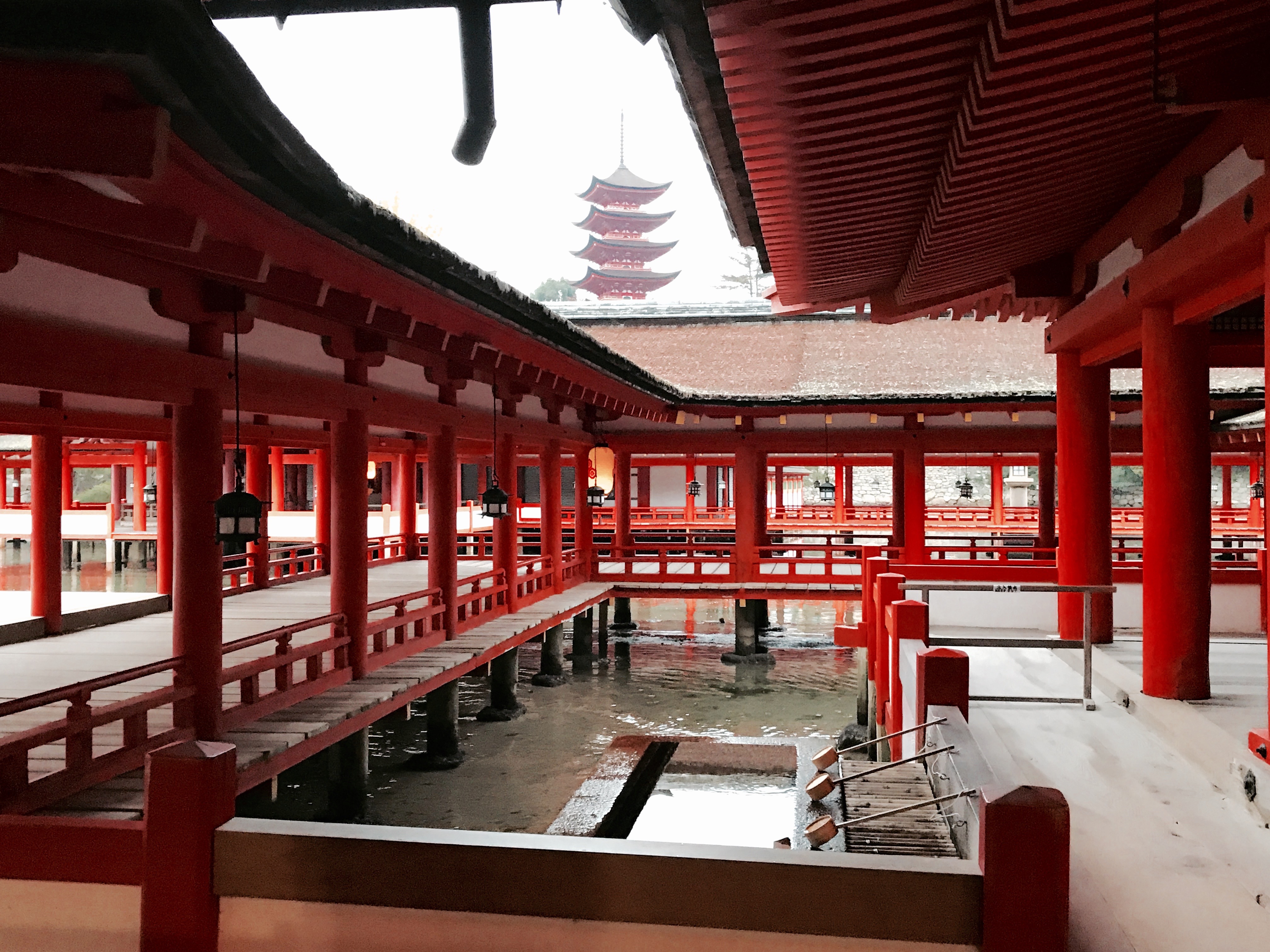 Miyajima is one more essential school field trip in these parts. Perhaps my biggest thrill was coming across dozens of elementary schoolchildren’s drawings of the shrine. I’m wowed by the startling artistic vision of Japanese kids and their unerring ability to capture details. They portrayed a sunny, happy world unbothered by the other visitors.  Their colorful pictures captured the spirit of the shrine, and were a much-needed antidote to the daily turmoil that surrounds us. 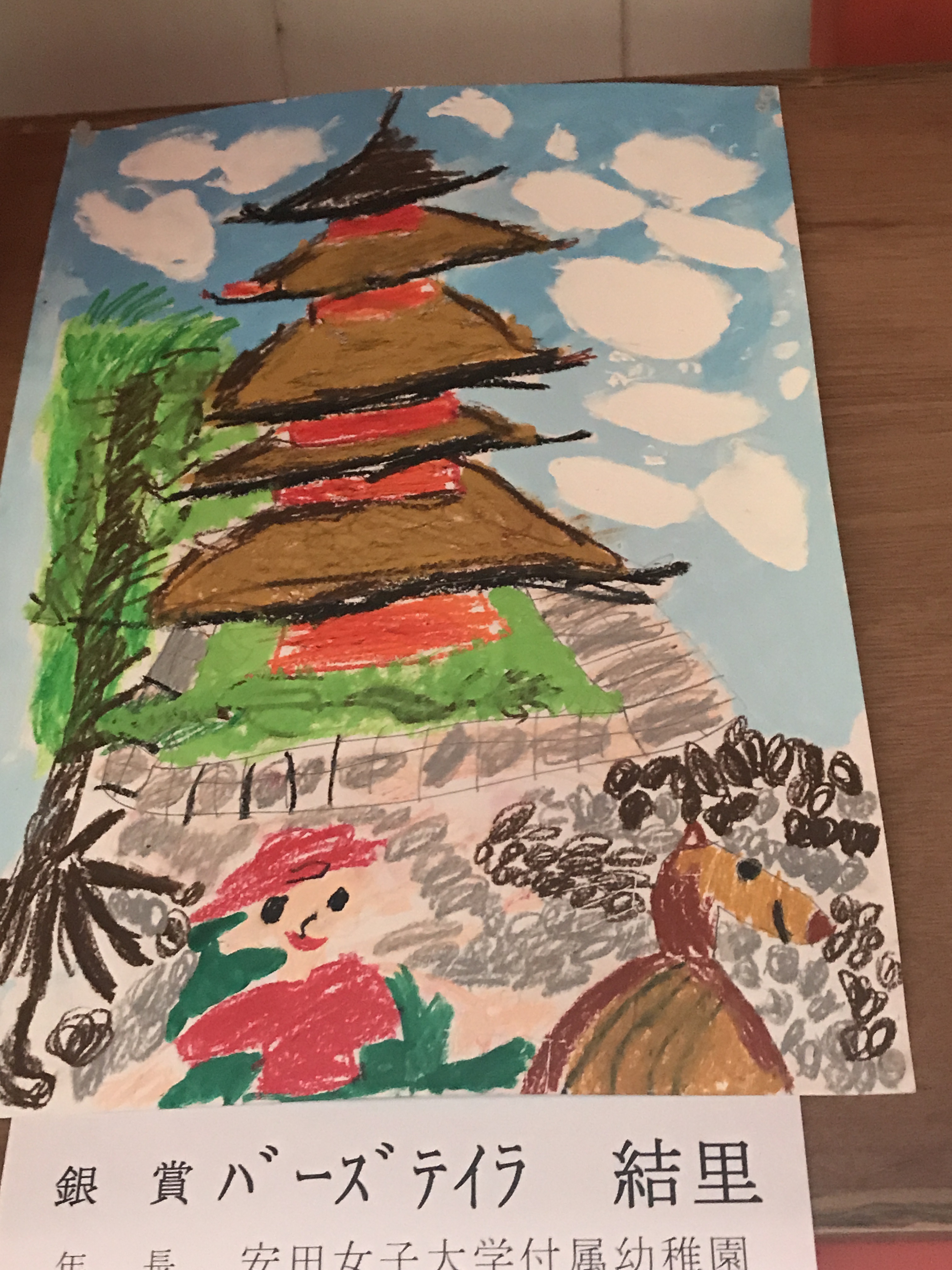 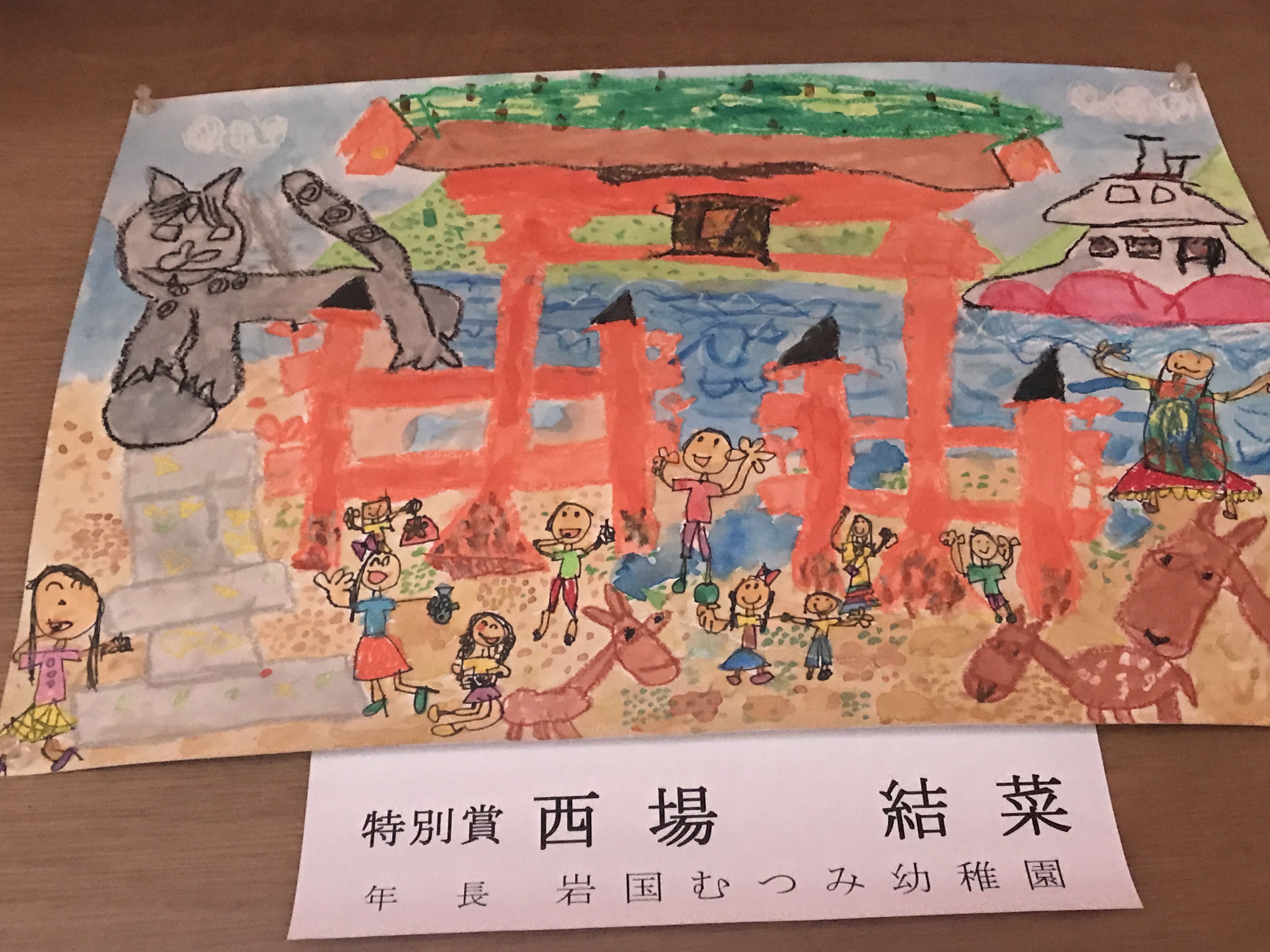 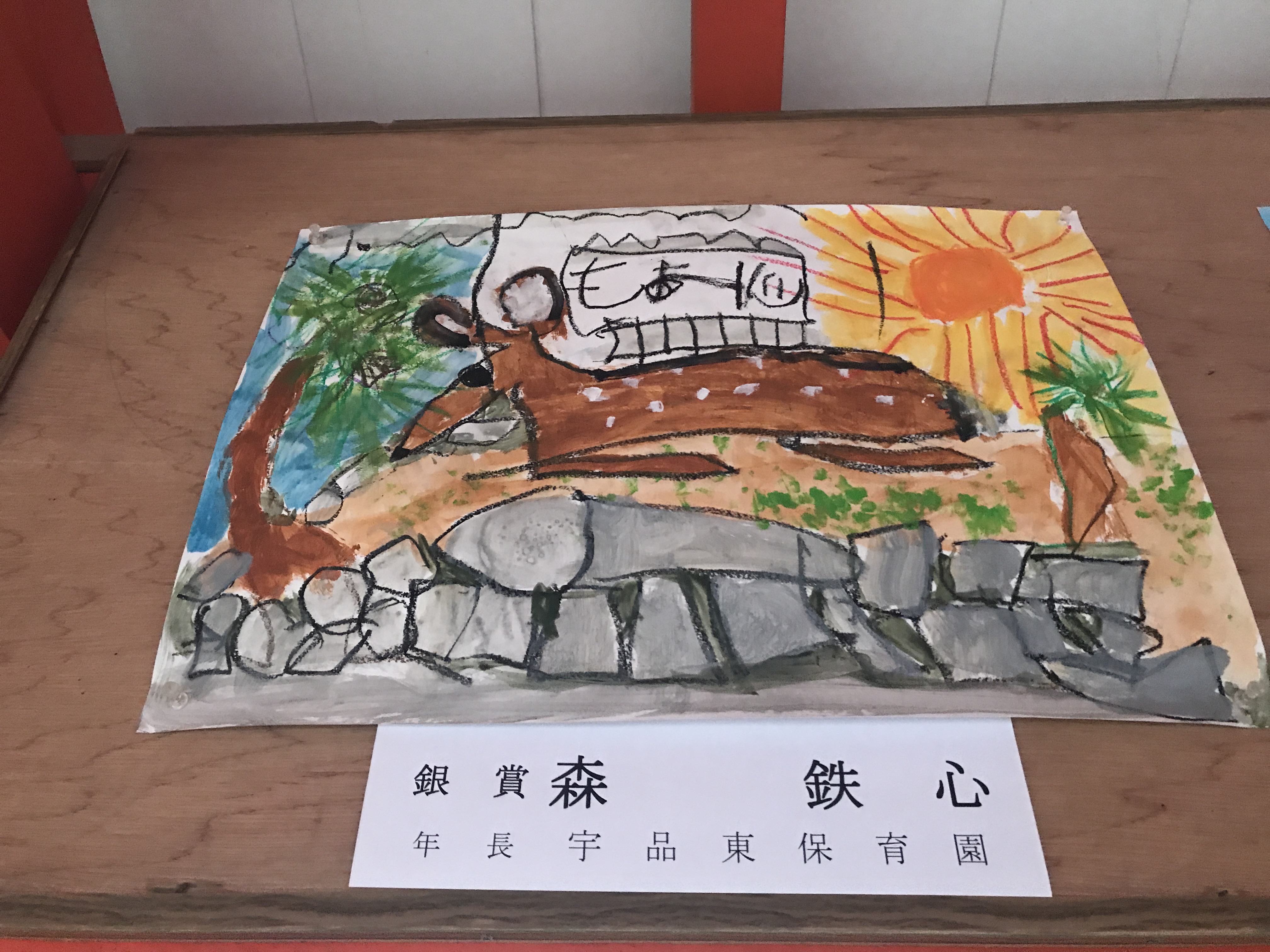 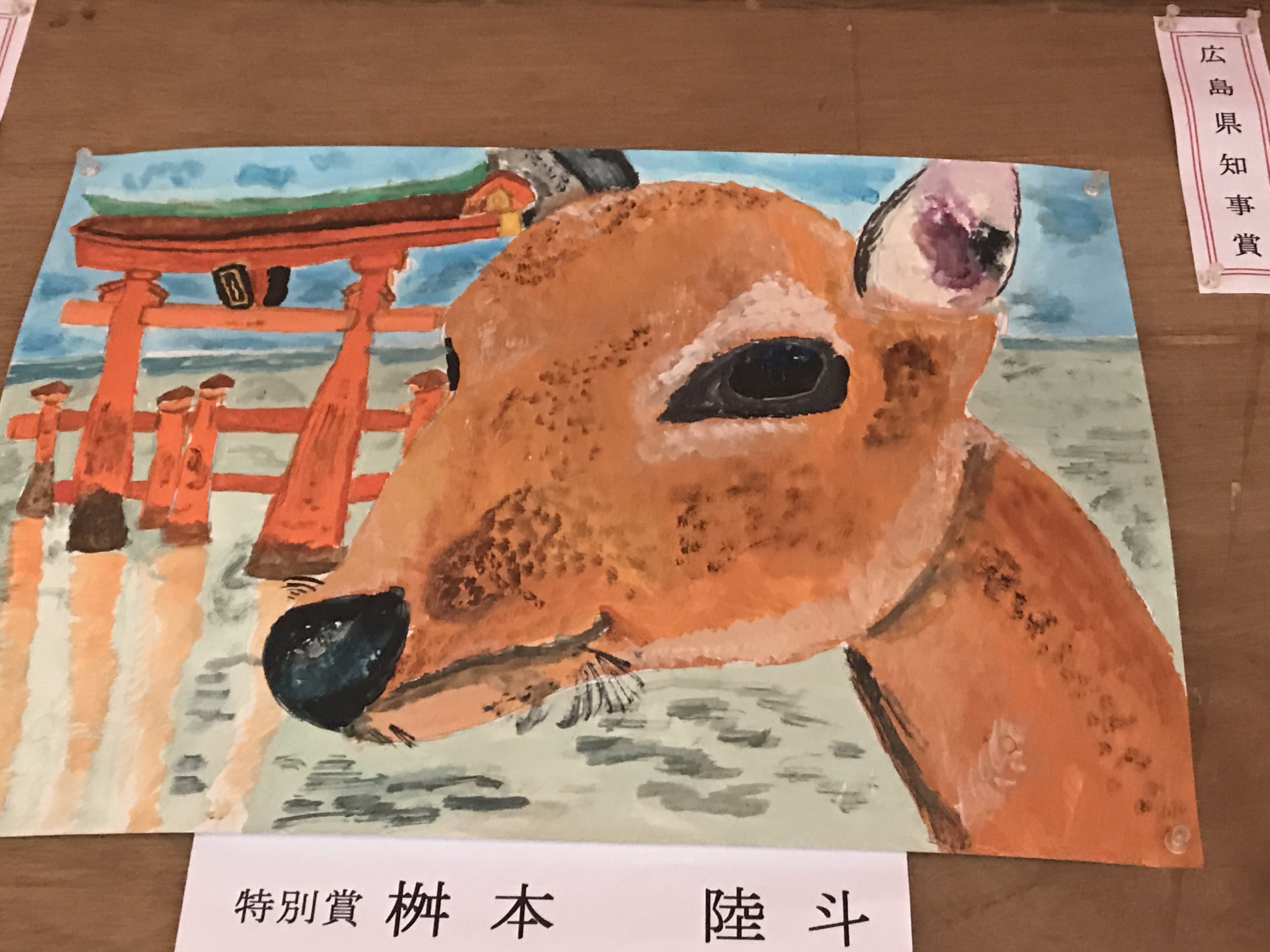 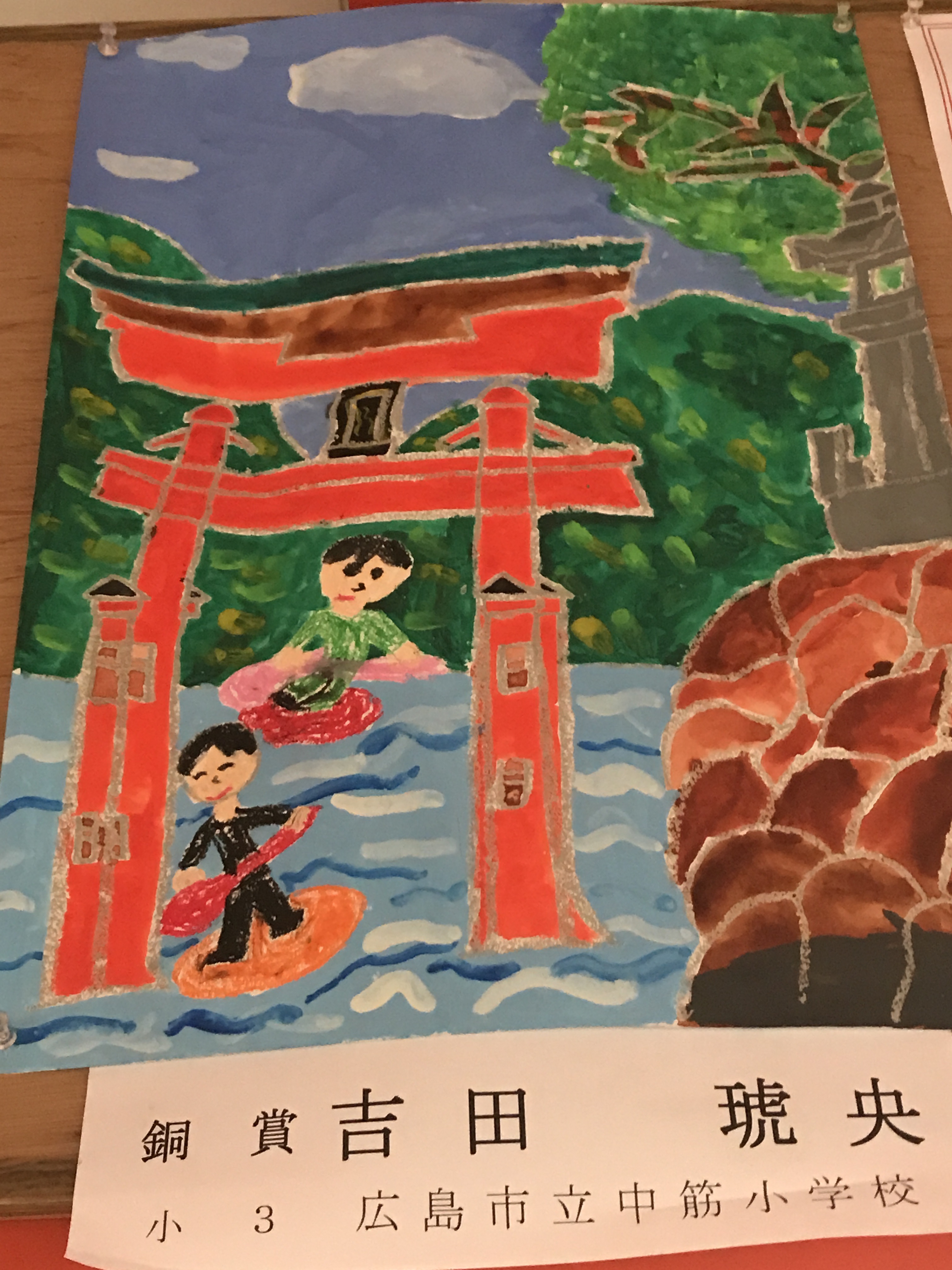 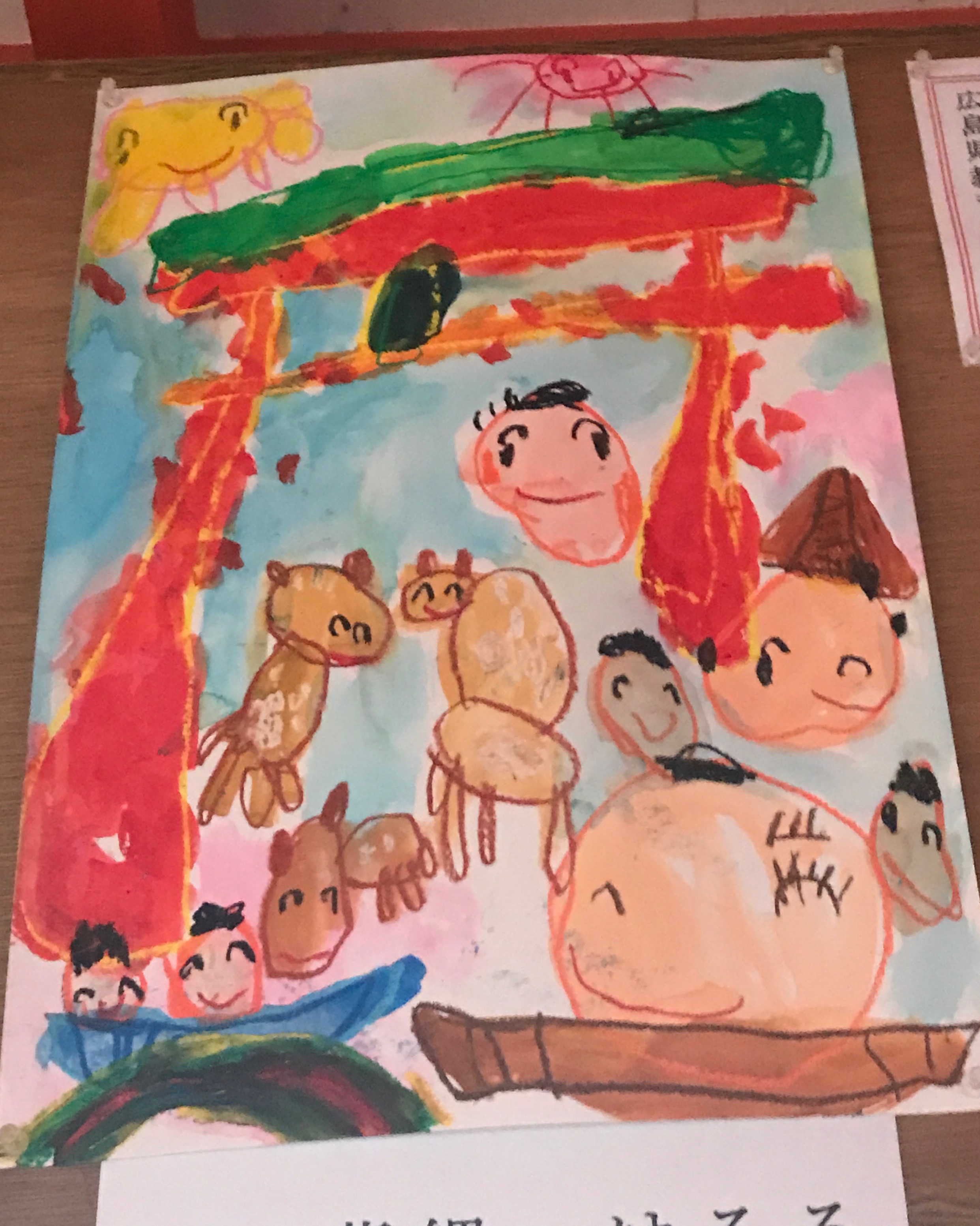 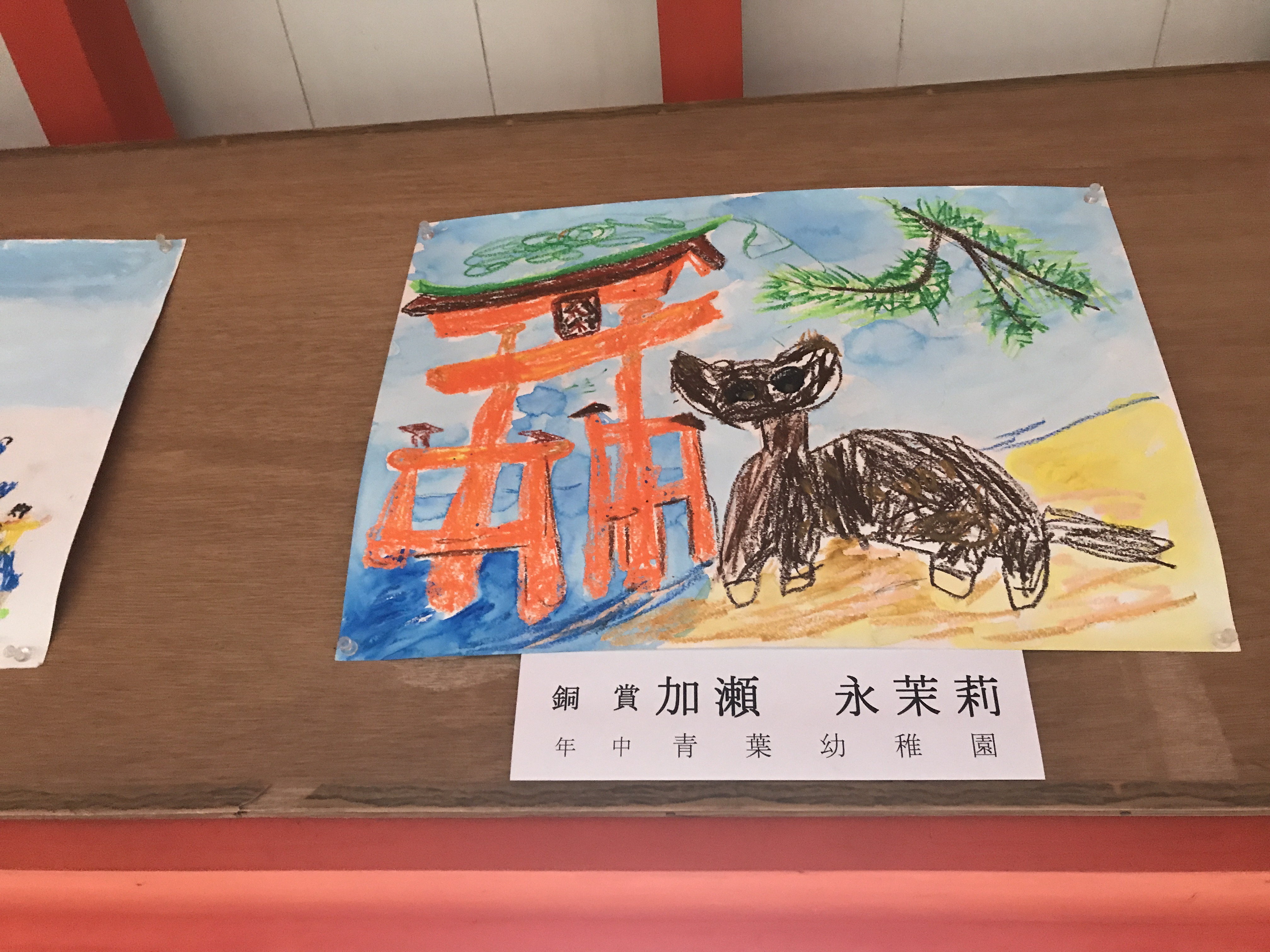