Many many years ago as I flew home from college in a small propeller plane, I sat in the bar area in the tail of the aircraft next to 1950’s celebrity Tab Hunter. He told me that he has to fly a lot and each time he lands he announces to himself, “Cheated death again!” It goes without saying I was a bit star-struck, but that phrase has stuck with me for life and comes to mind whenever I get out of or escape what could be a tight situation! 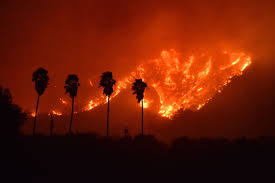 Our area of Central California has been brutally struck by back to back natural disasters. Two elements showed their power: first, the largest wildfire in California history held us hostage for weeks and then the water from winter rains arrived that we need so desperately after years of drought.  The fire was threatening, we breathed dangerous smoke from it for weeks and towards its end had to face the unthinkable thought that the fire might make its move and destroy Santa Barbara.

A few nights ago, a long-awaited winter rainstorm arrived.   In a very short time, it gathered impetus roaring down streets at 50 mph, carrying debris from some of the burned areas in a massive and deadly mudslide. It caused widespread shocking destruction in our neighboring town of Montecito.

We expected the rainstorm but believed like many other storms predicted, it might not be as strong as anticipated. We doubted the dire warnings that were issued for many in the burn areas to evacuate once again. I did awaken once during the night and heard a hard rain for a few minutes, but quickly went back to sleep, certain that it was just a small intense shower. Our daughter’s phone call in the morning hinted of the destruction that surrounded their home in Montecito. They were fine, but clearly many others were not.

What is it about a natural disaster that makes us want to witness the damage? There’s a certain excitement that follows a disaster, admit it or not. Particularly if you and your loved ones are safe. You want to see for yourself what nature has wrought. 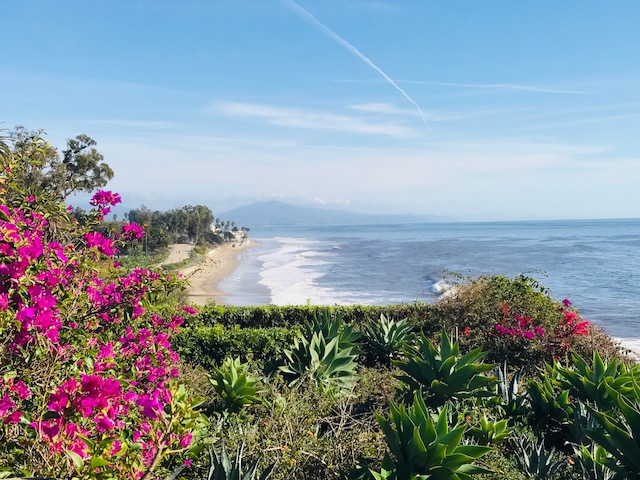 Today was a spectacular California winter’s day belying the fact that tragedy lay at our doorstep. I felt slightly uncomfortable wanting to visit the areas that were damaged, but curiosity carried the day. I guiltily thought of the many who were still searching for their loved ones.  So many were still missing. We kept walking. 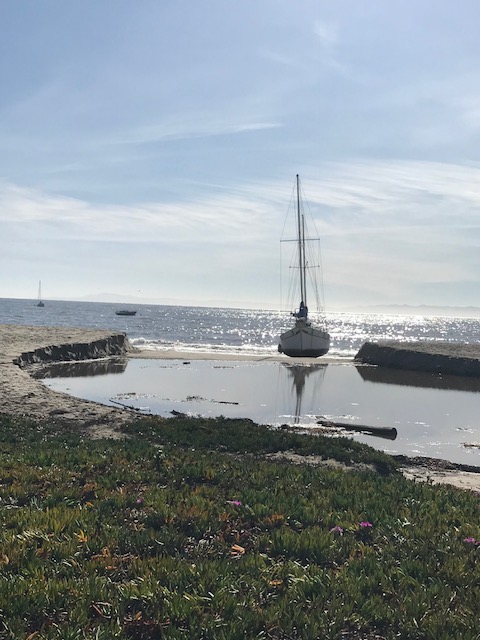 The peacefulness and natural beauty of our surroundings could not be overlooked. Few cars were on the road. We could hear bird songs and admire the calm glittering ocean as we walked along the road by the beach. We passed a beached sailboat, still upright,  looking pretty in the sun as if it had decided to try some time on land. The helicopters continued to fly over us as they transported victims to the hospital, an ominous reminder of the current reality a few miles away. It was not until we descended a small hill that we got a glimpse of what was the final run of the mudslide, ultimately stopped by the ocean and the topography. In front of Santa Barbara’s most beautiful hotel, was a river of mud. We could walk no further. I think most of the heavy debris had come to rest elsewhere. 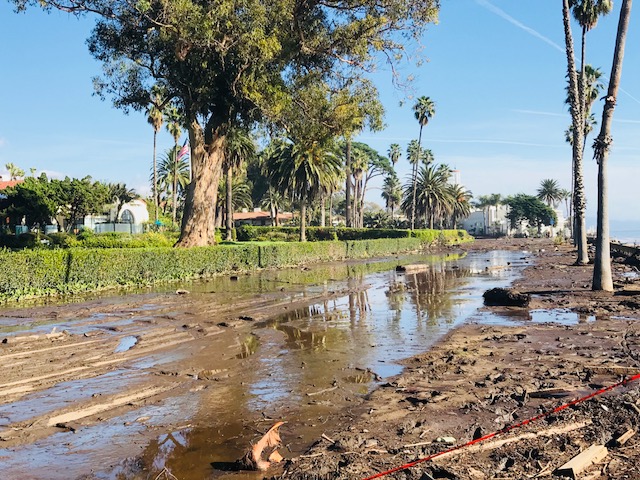 The differences between the “normalcy” of Santa Barbara and the images from Montecito could not be more striking and surprising. The indifference of the universe to a disaster is striking too. It’s the same after a death of someone close to you. You expect the world to be altered. But it’s not. In a matter of minutes, lives were lost, landscapes transformed and people’s lives were forever changed. It all seemed so random. One block away from the slide could save your home and your life. Or not. Wrong place at the wrong time or right place at the wrong time. You didn’t get to pick.

We all live with the illusion that denies our perpetual vulnerability be it to sickness, aging, accident or disaster.  Our houses give us some protection, our medications provide some relief, a sturdy car provides some protection, etc.  Our pastimes provide distractions from the reality of our circumstances, but the bottom line is we are all vulnerable all the time. And, thank God for distractions! The faces of the couple below show that their illusions have been stripped away.

But catastrophe defies logic. It faces us with disruption and discontinuity, with the breakdown of order. NY times May 2011

This survivor I saw on tv came to tears each time he recounted finding an infant buried in the mud, but alive.  He just happened to be in right place at the right time with the right instincts to save her life.

The history of humanity is filled with the histories of such tragedies as we’ve just witnessed.  Many, on a much larger scale.  We survive or we don’t.  The larger world is indifferent.  Life goes on.  Natural disasters will not end.  There are no easy answers.  We are personally left to console each other, to be kind and to be generous to each other.  There’s so much pain.  But there is so much courage and beauty to be seen as well that is a powerful antidote. 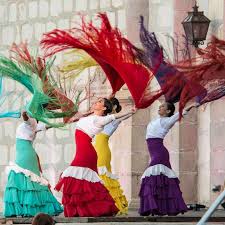