I wanted to love it, and I occasionally did almost enjoy it.  It had its moments.  Just not enough of them.  It was a blockbuster digital art show presented by the Mori Art Museum called Tokyo Lab Boundless.  It is state of the art of digital technology.  Tickets were scarce, but I got one.  I waited in line to enter as my anticipation built, while knowing instinctually that I might not like the manipulated world that awaited us.

How to describe the encounter?  It was an encounter, because the visual overload was close to overwhelming. Visualize many large overlapping spaces contained within a huge hangar. Within the hangar are rooms with different visual displays, mostly relating to nature.  Rooms ultimately morph into other rooms and the spaces purposely become “boundless,” constantly moving, shifting and reappearing. Hints of eternity?

Envision being in a space where every surface is covered with some of the following in a digital rendering; flowers of all kinds and shapes, a waterfall room where people lounged on a large rock as a digital waterfall cascaded over them.  Butterflies flitted and birds flew, thousands of straight strings of l.e.d. lights  changing colors were the Ultimate Christmas Display in my opinion, alluring and transfixing. At the top of a long flight of stairs waited a room with hundreds of suspended  lantern lamps changing colors as well. 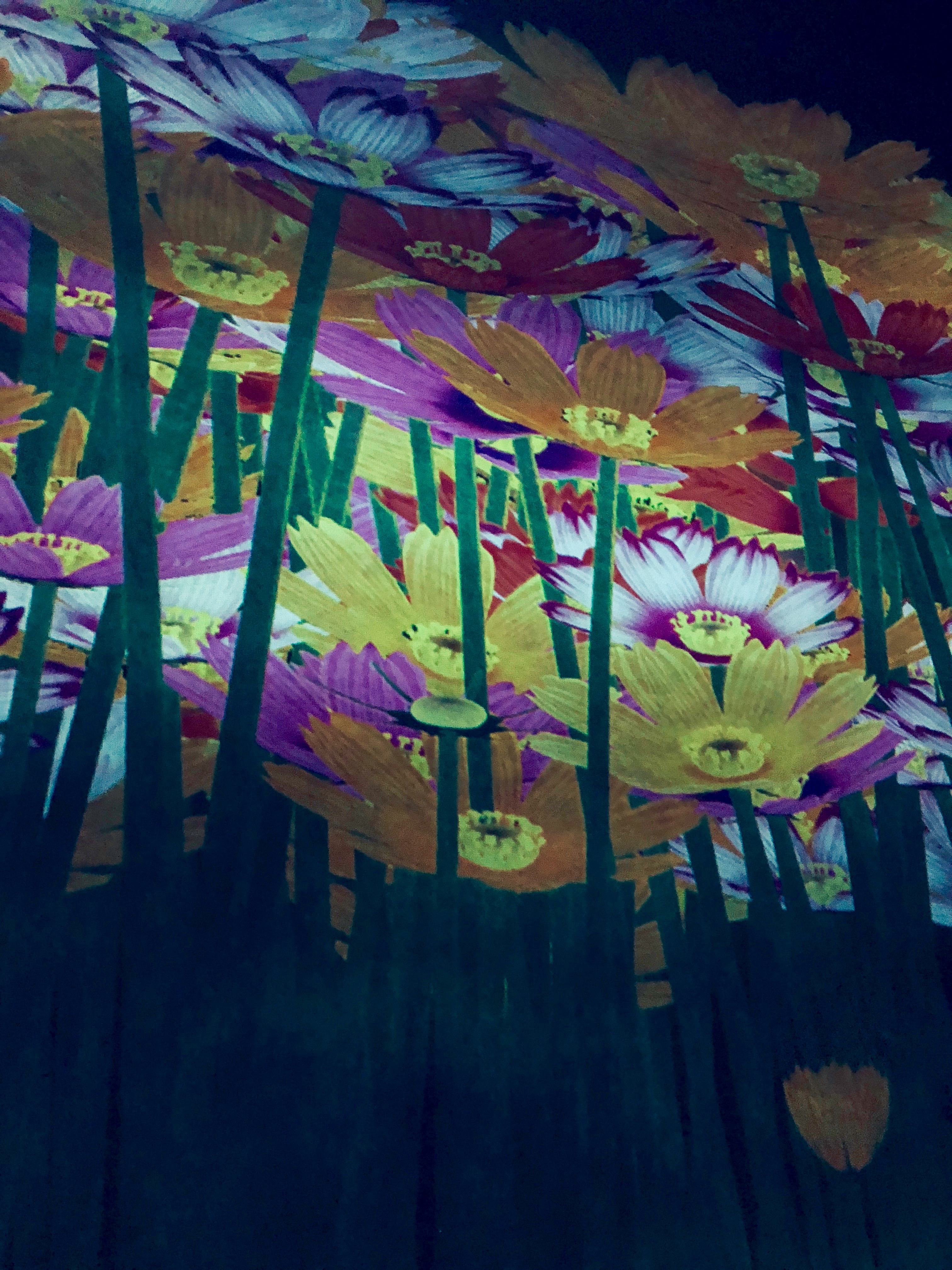 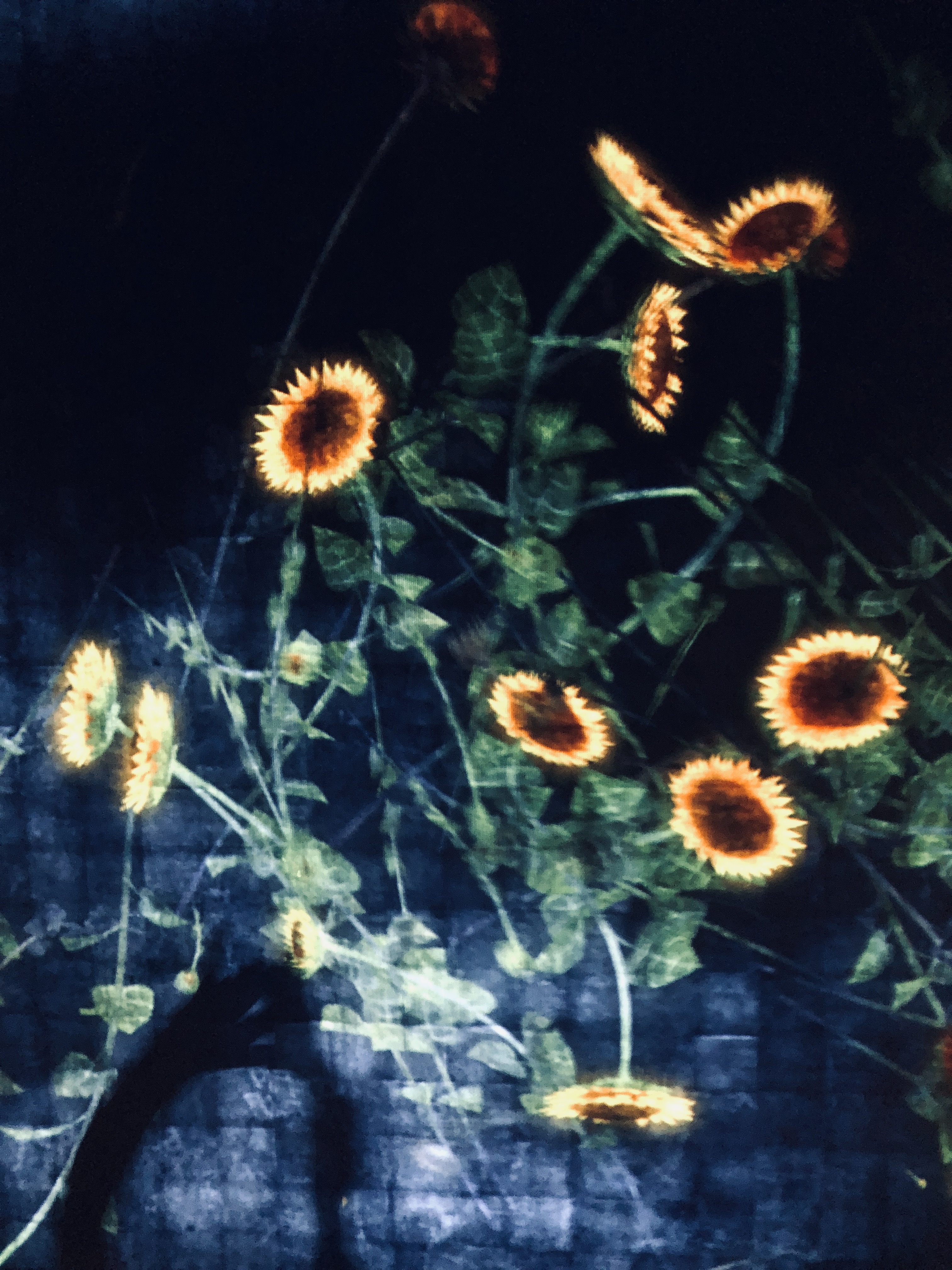 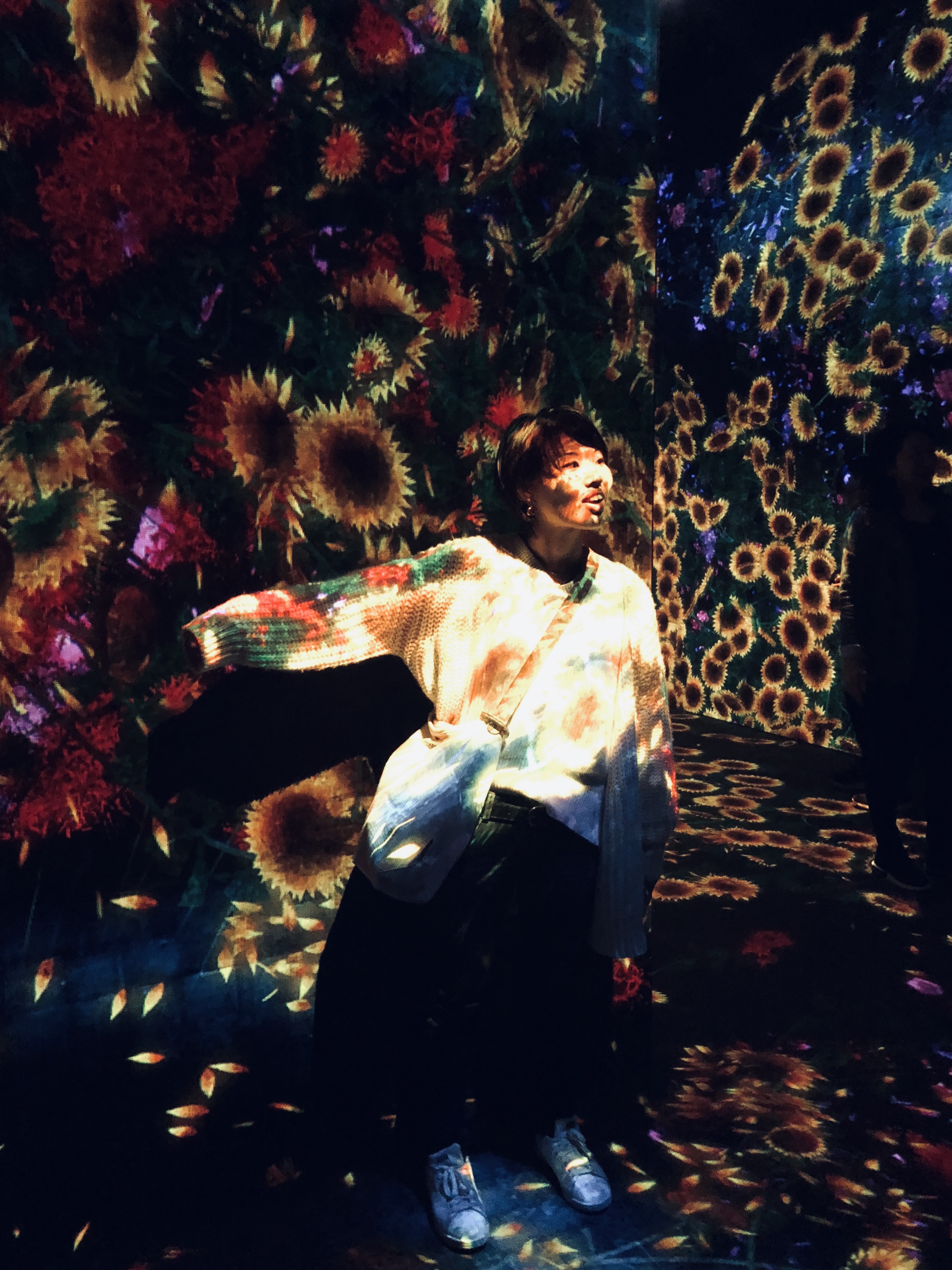 Most of the projections were symbols of the natural world. The images covered every surface including ceilings, floors and visitors.  MIrrors added to the illusion of infinite space. 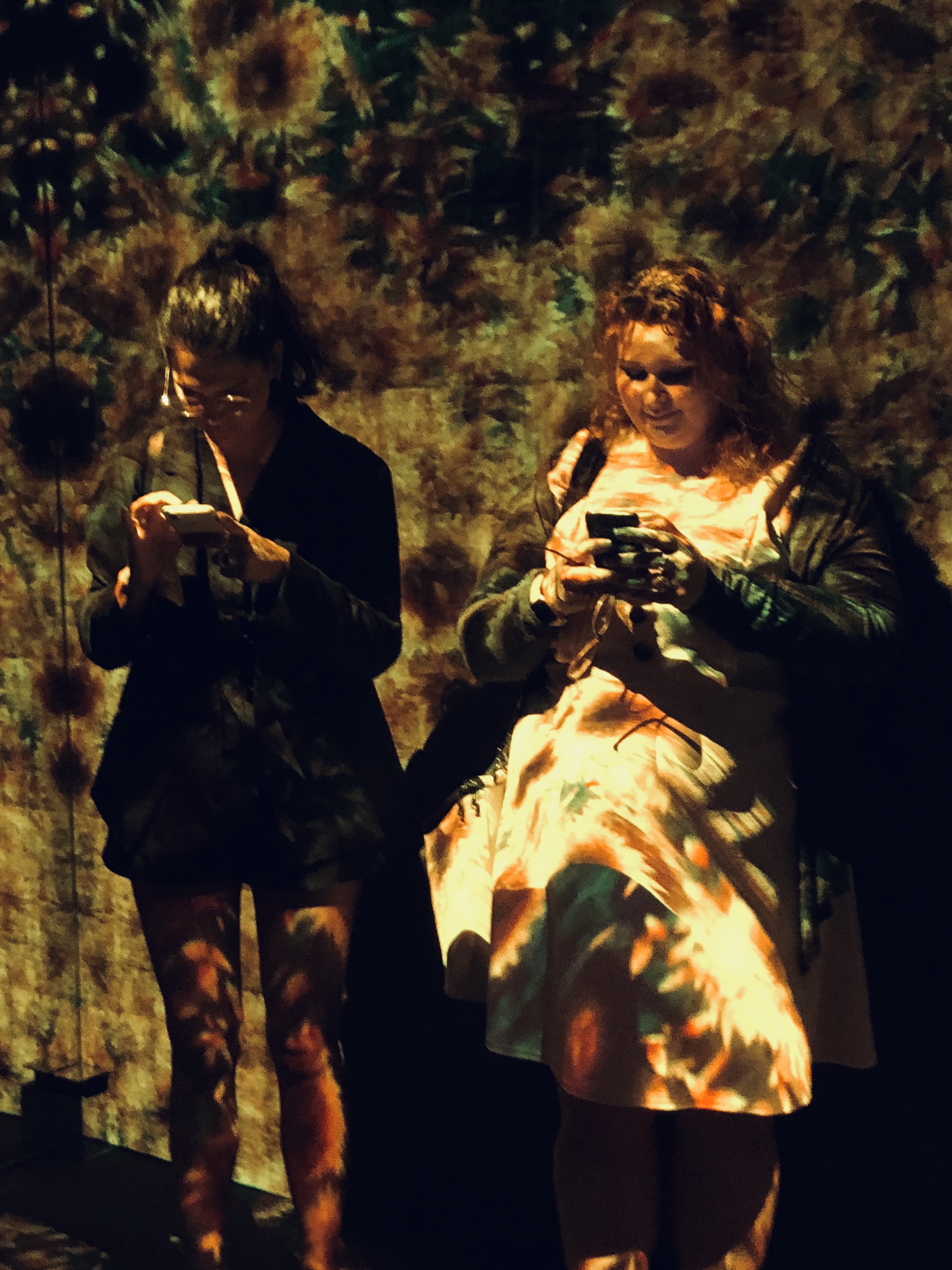 The spaces were crowded. Optimally, I would have liked being the only visitor. Disorientation was part of the experience, but after a while, looking for a way out of this manipulated world became a distraction as well.  There were moments when I thought “how cool, or how beautiful” but they did not outweigh the discomfort I felt at this whole idea.

With our planet in the throes of seemingly unstoppable and accelerated climate change, was this display the way of the future?  An idealized manipulated version of what was the natural world? Is this what will remain when nature collapses?  Just memories lacking the realness of texture of scent of birth and decay?

Was I the only one to interpret the dark side of this extravaganza?  Maybe to most visitors, this would be a more than acceptable substitute for the real thing.  Just as some climate deniers are suggesting we could all move to another planet?

Suddenly I wanted to be released.  Not so easy to find an exit though the endless rooms. I had to first find a worker who slipped me out of an unmarked back door, after I was insistent about wanting to leave. 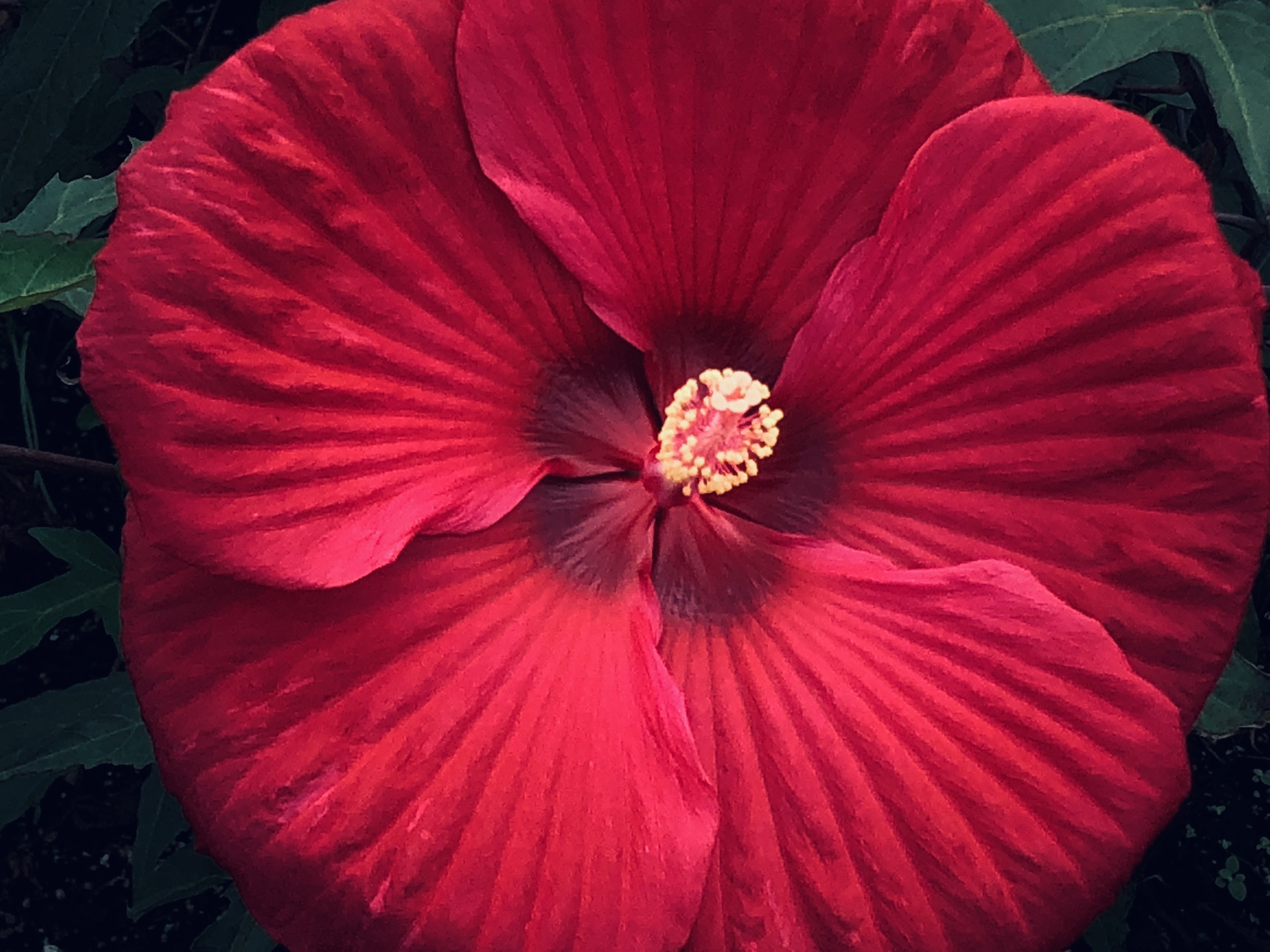