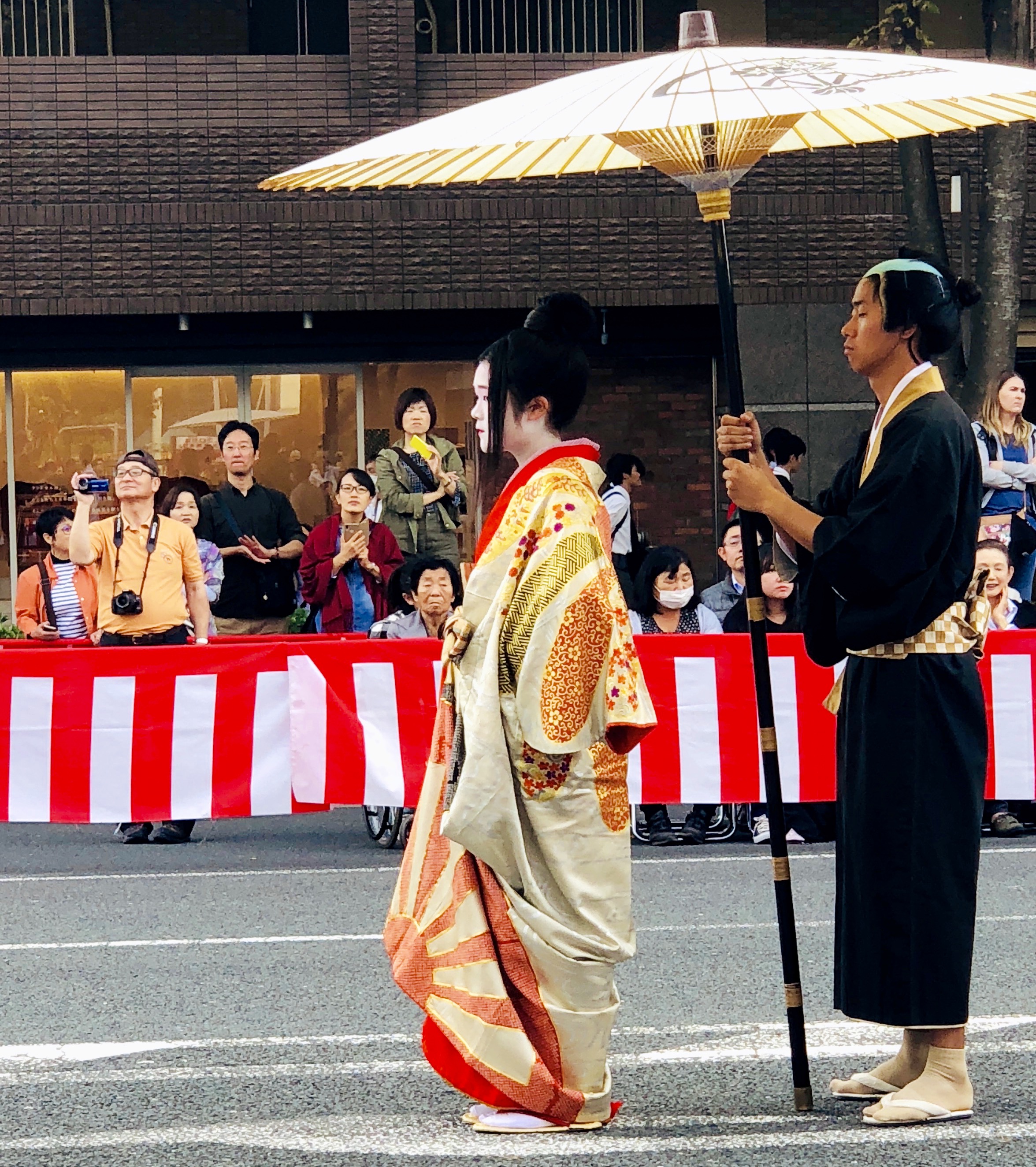 Who doesn’t love a parade?

Kyoto has three important matsuri during the year. JIdai matsuri is one of them.  I’ve seen the other two, one in spring and one in the suffocating hot summer.   I had not heard of the Jidai matsuri until a few days ago when a Japanese friend of mine confided that this was her favorite festival of the year.  Given all that takes place here, that’s saying a lot.  I decided to check it out.

The main attraction is the parade of over 2,000 people, all of whom are dressed in meticulously crafted costumes that represent each era of Kyoto’s 1,100-year history. The parade follows a reverse chronological order, starting with the Meiji Restoration in 1868 and working backwards to the Imperial Court of Emperor Kanmu’s reign, and includes members depicting famous historical samurai or politicians, as well as members of the merchant and commoner classes.

From an outsider’s point of view, I viewed the procession largely as a fashion show.  I quickly lost interest in the boring narrative related to us by a Japanese woman reading.about the procession from a book in English.  After a half an hour of trying to make sense of her narrative, I pulled the earpiece out and watched the procession in blessed silence, moved by the historical legacy of this city and the role it played as Japan’s capital for a thousand years!

I cannot relate to you who’s who or which historical period they represent. I hope you don’t care.  There were a lot of warriors.There were lots of dressed up horses too.  There were striking Shinto elements as well.  There were dozens of men in the emperor’s retinue. Many looked tired of walking.

Much of Kyoto’s earlier history was about one war after another. Bloody times.  (and don’t their shoes look surprisingly flimsy?) Life for commoners was challenging and short. Life for the aristocracy brought with it great privilege but seldom peace, except in certain periods. 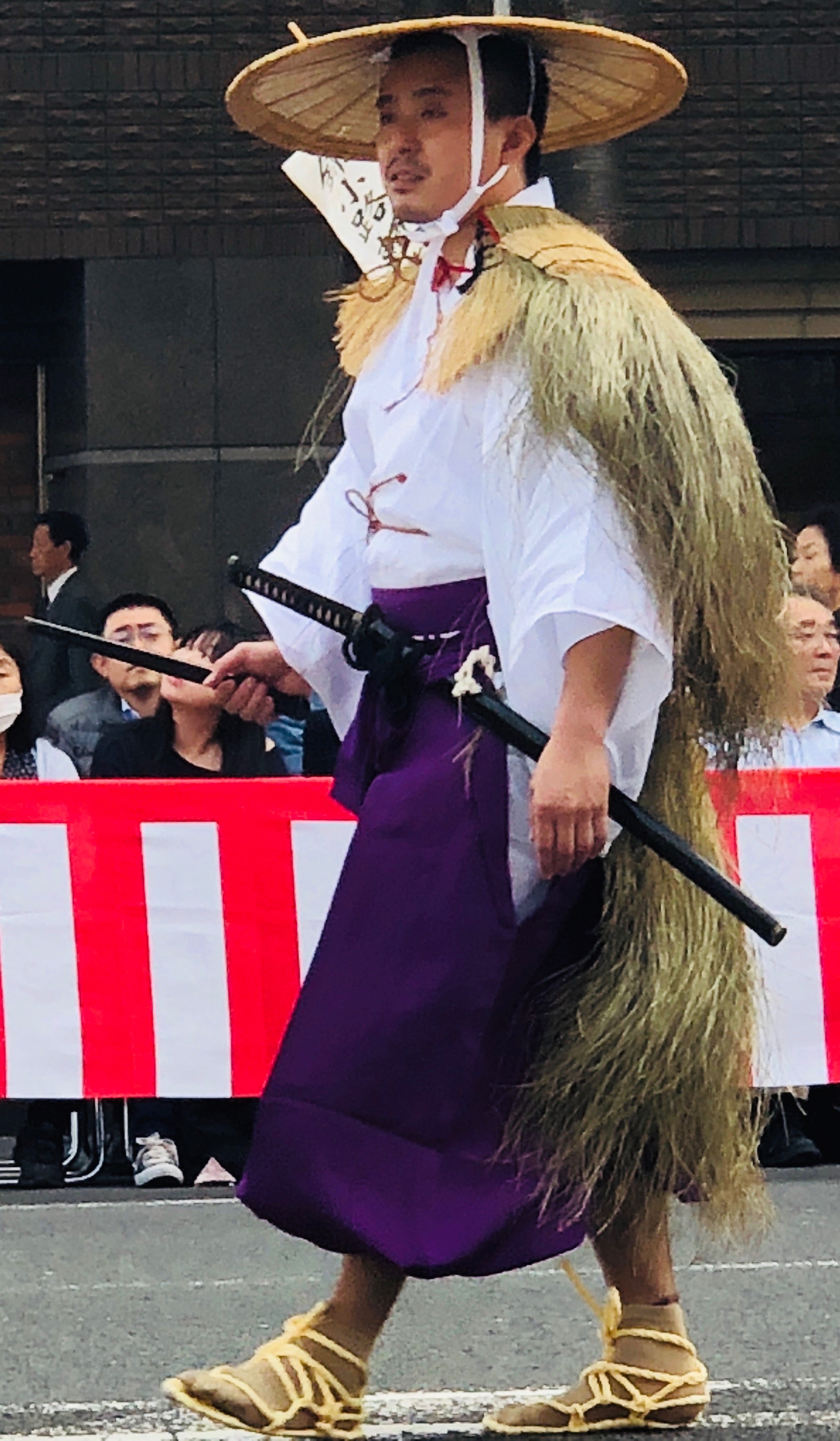 The straw outcropping on this warrior’s back is a raincoat. 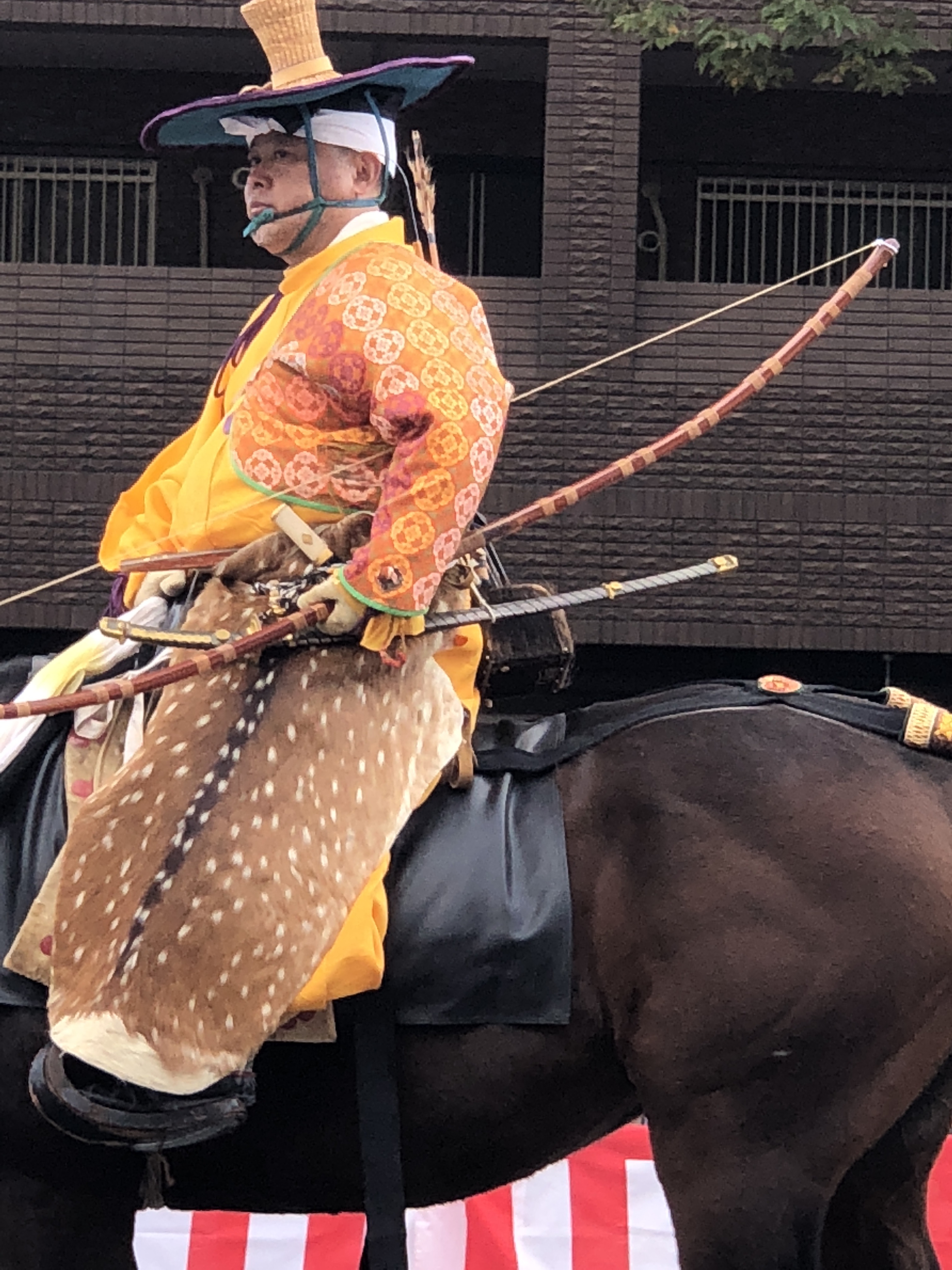 Maybe not fleet of foot, but don’t underestimate his marksmanship ability on his steed. 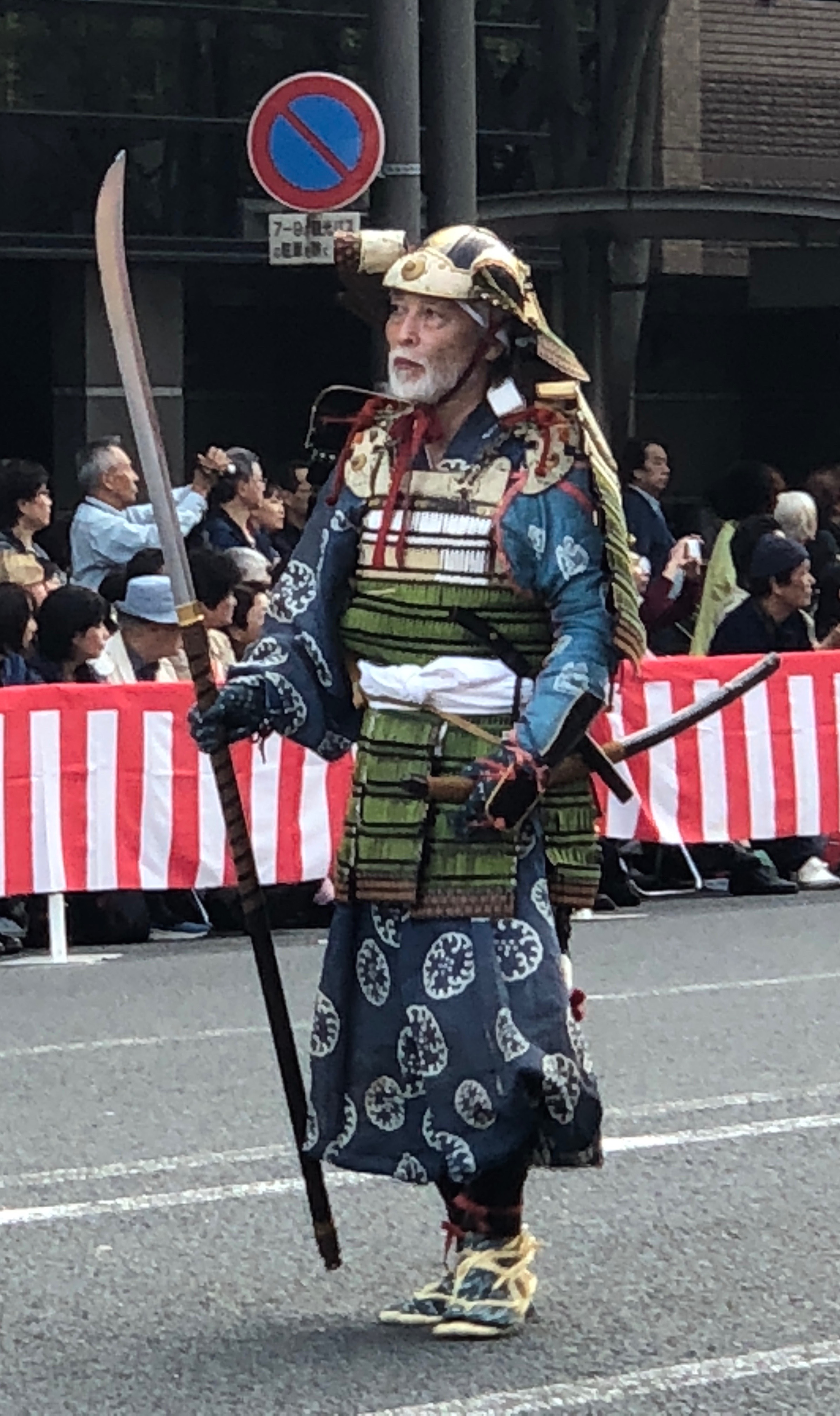 This warrior needs his own role in the next Star Wars sequel, I believe. 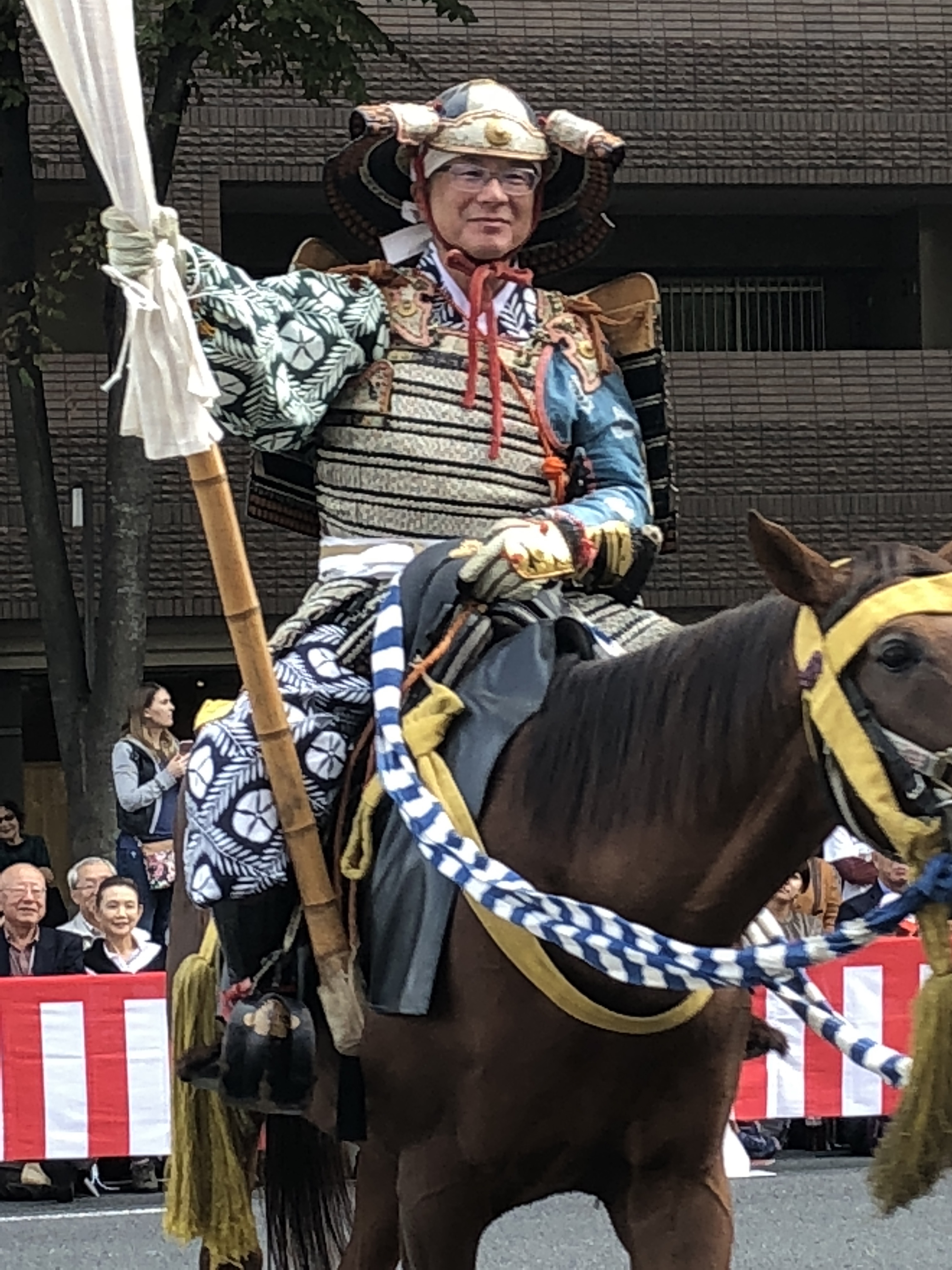 I hope you enjoy the images and the pageantry I witnessed.  All costumes are guaranteed to be authentic reproductions, right down to a specialist who just does the hair of the participants!  I was amazed at the bright colors and patterns of the attire.  Of course, this procession celebrated the who’s who of Kyoto over hundreds of years.  The aristocracy and members of the court as well as the priests and warriors dressed to impress, no doubt!

I was grateful that the timing of this Kyoto visit coincided with this matsuri.  It’s one of life’s experiences that I was delighted to witness, but feel no need to witness again!

the beginning of polka dot love?  Shinto priest, I believe. 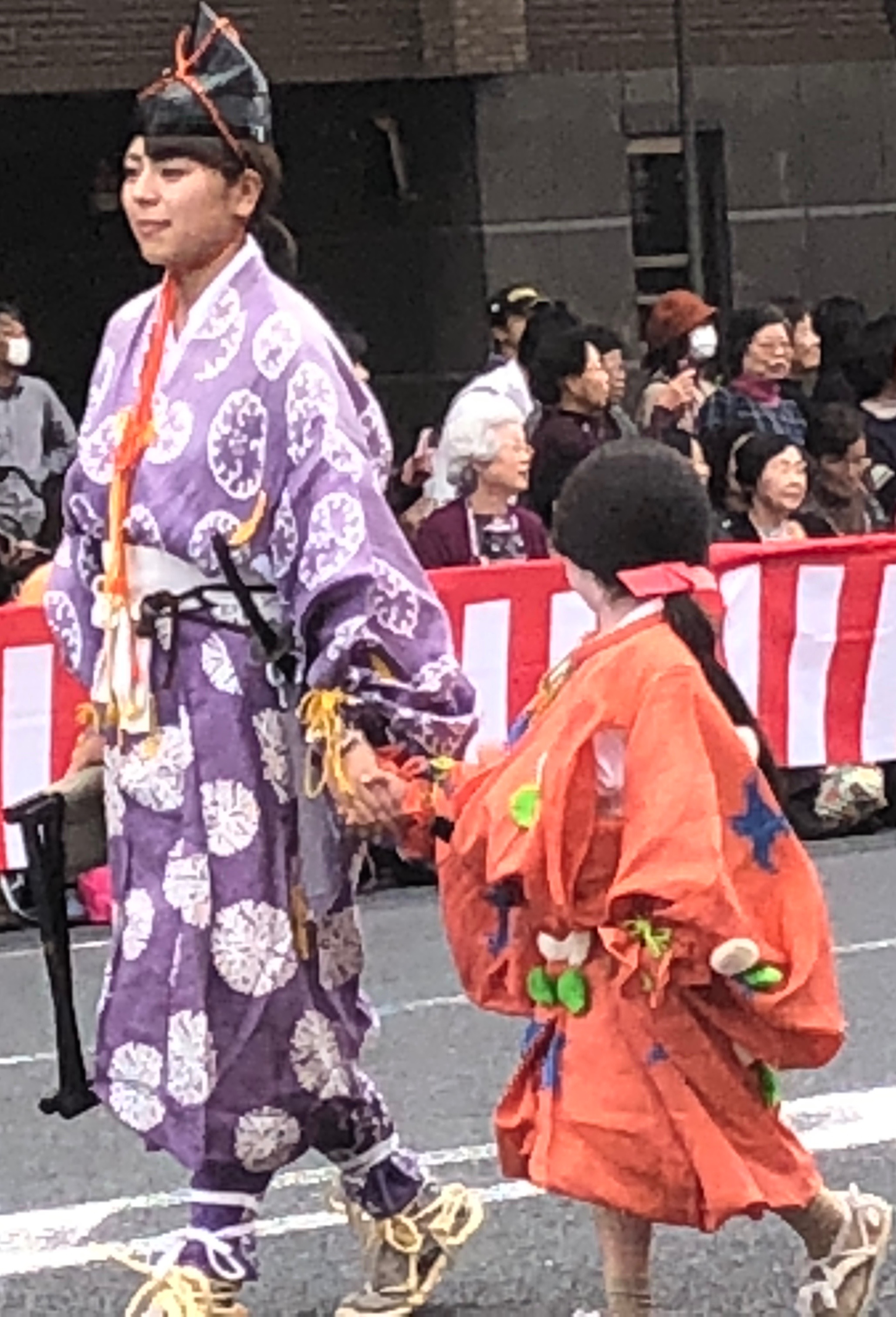 young princess? Would this dress be for going to a birthday party? 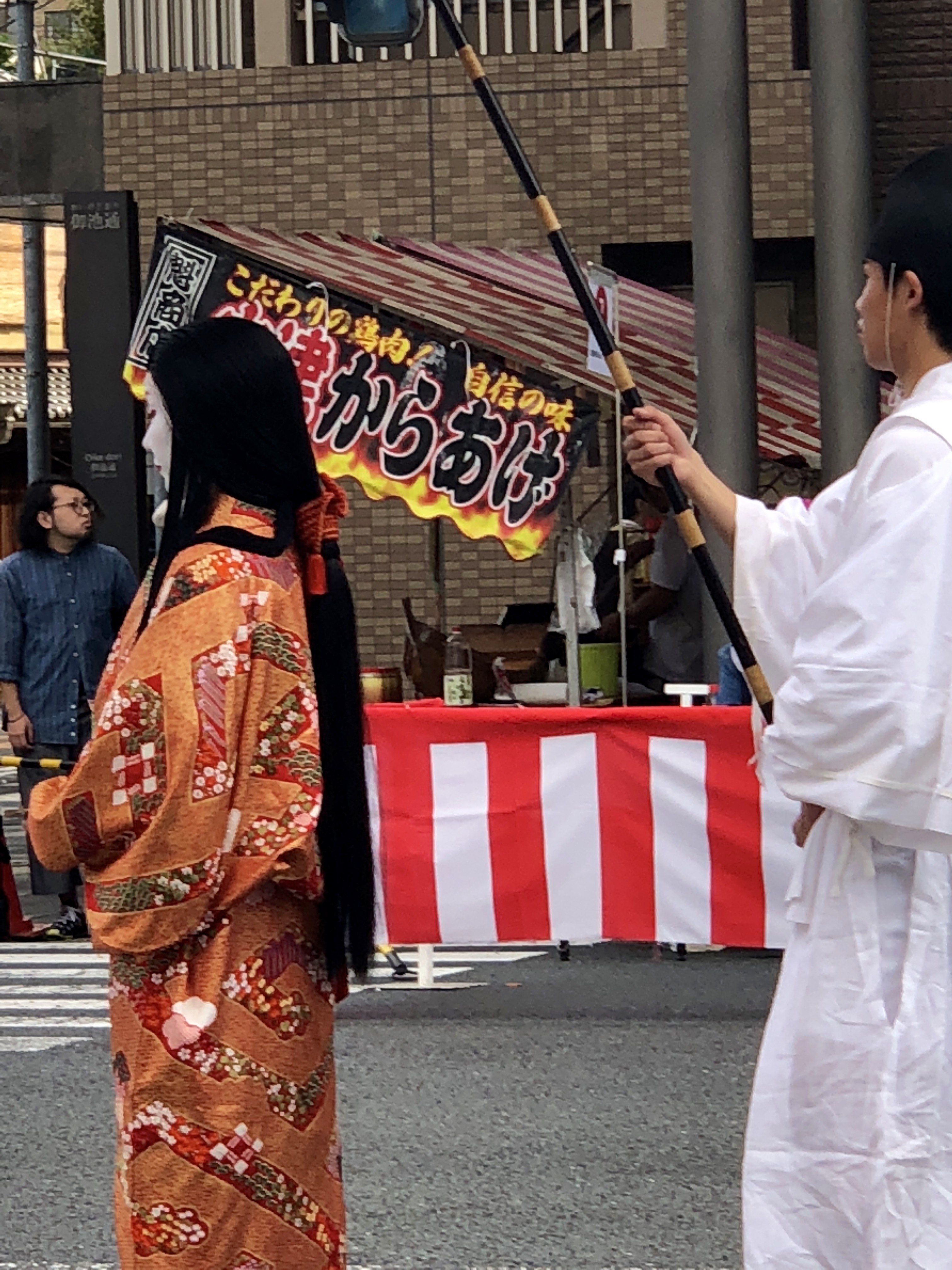 empress or favorite concubine? I doubt that the empress would be walking. 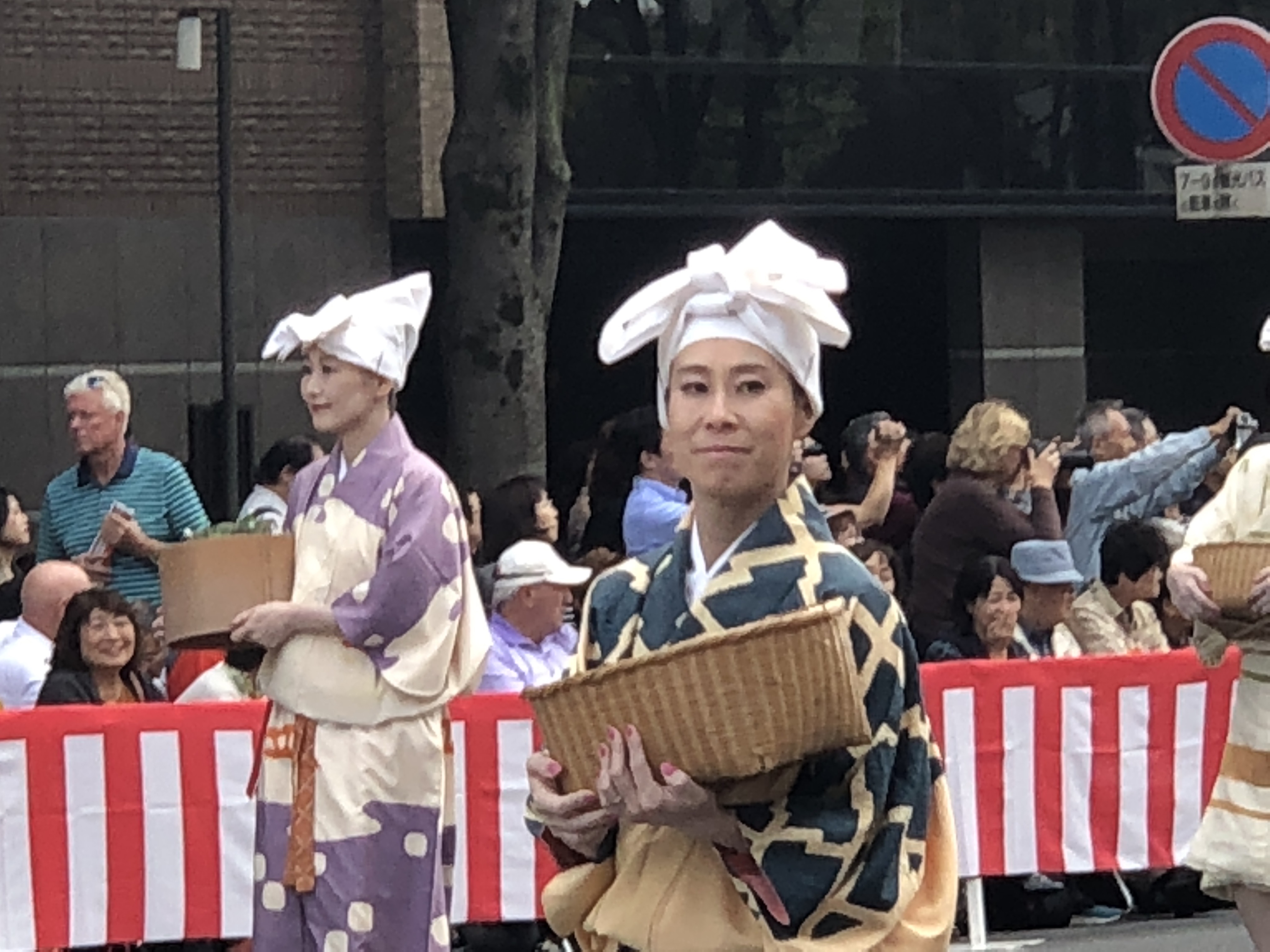 Women from neighboring countryside of Ohara who would come to Kyoto to sell their produce.

Look at these colors! The artisans worked long and hard to produce these textiles!