Skip to main content
Close Search
Growing Up in the 1950'sCocktailsAging

Flashback!  The year, 1960.or ’61.  The sound, jazz. The feel, beatnik wanna be.  The setting, a dingy nightclub under railroad tracks in run down industrial city.

It was the T Club.  I had one or two friends who I could easily convince to come along with me.  In order to get there, I had to get my Mother’s car.  That required some white lies, which I could easily justify to myself.   If I had told Mom the truth, she’d never would say yes. She probably would think I’d lost my mind.

It was a summer thing.  About once a week.  Head up a very long and dark flight of stairs to the closed-door at the top of the stairs.  Enter the dark and smoky T Club.  Take a seat at a small table near the stage.  Order cocktail(s). No id’s required. Smoke ciggies. Feel very devil-may-care.  Look around to see if my current crush might be there.  Rarely, but one could hope.  Zone out to the sound of jazz.  Look cool.  Feel cool. We didn’t call ourselves beatniks, but we were under the influence for sure. 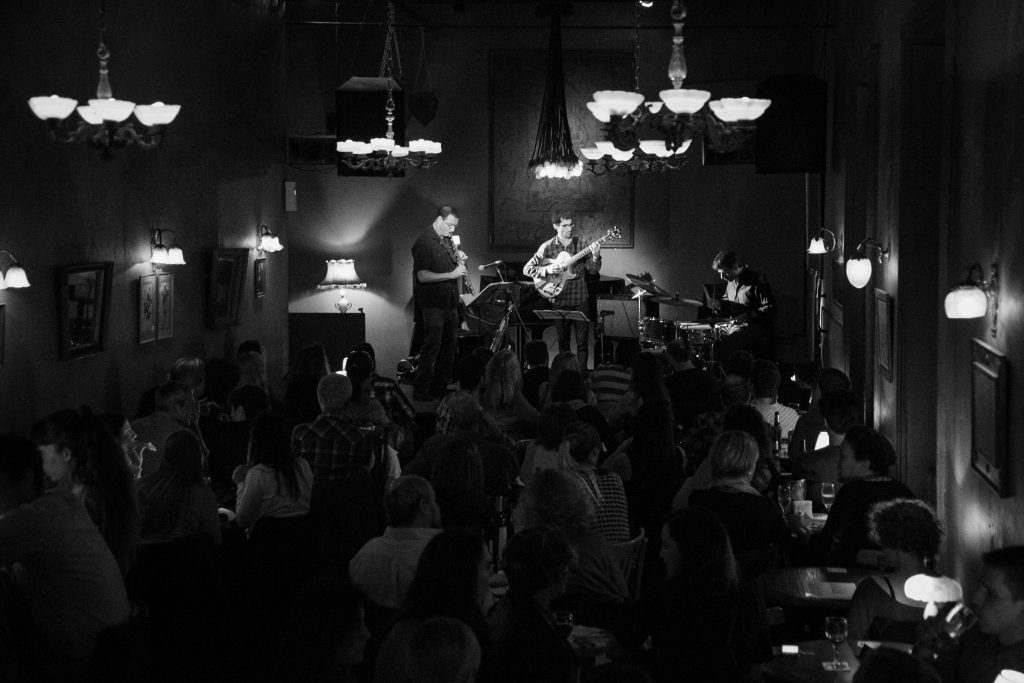 It was so dark no one could even see if we were cool, although I have my doubts that we caused any kind of stir.  Mainly, we were young. So young. Jazz seemed to be a fitting soundtrack to my life.  A little edgy, but not dangerous in any real sense.  Just Alive! The strong rhythm pulsating through the music that required attention be paid.  Sometimes sensual, leading to daydreams of romantic encounters.   It was the time of life when your life could change daily, when promise of romance hung in the air, and when little seemed impossible, although life was pretty limited in knowledge of what might or might not be possible! Just venturing out to this club felt like going into No Man’s Land in terms of the culture I came from. Think Something’s Coming from West Side Story.  I still believe the lead of Tony was woefully miscast for the film, but the lyrics tell the story and captured the feelings perfectly.

It all came back to me last night when we went to hear a friend play in a local brewery.  The scene was very different this time around. Nothing “undergoundish” or subversive about it.  If anything, there was an air of CA beach town wholesomeness about it.  The jazz sounds were similar, but the denizens of the brewery were decades younger than I, often with children in tow. They didn’t seem particularly interested in what the musicians were sharing which told me that they were there to hang out and felt no need to pretend to be interested in the music or to “make the scene.” Times change. I still enjoyed it, more or less shutting out the bright surroundings and understanding the expectation and excitement felt decades ago when listening to jazz in a smoky club would not make a return appearance.