At age 79, I’ve become acutely aware of ageism.  Ageism is generally  perpetrated by someone decades younger than the target. It’s a form of generally accepted  ridicule.   Usually by smug men. It makes me angry and it needs to be called out more frequently than it is.

We older adults have to be careful not to “buy in”  to the media’s assessment.  I’m as guilty as anyone.  I am always thrilled if someone tells me I don’t look my age.  If someone seems unimpressed with my age, I am always disappointed. 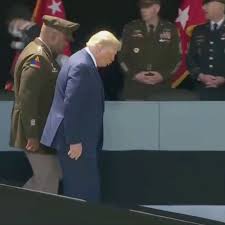 A few days ago, as I was watching three different channels for news, each news reporter talked at some length of Trump’s difficulty in descending a stage after the West Point graduation.  I could identify with DT.  He had a long ramp to walk down, with no hand rail.  He proceeded very cautiously, not alternating legs.  As much as I dislike him, I did not like him being called out for his cautiousness  walking down a ramp.

Hey, guess what?  As an aging adult, you might lose some balance, your knees might become arthritic, and the last thing you want is to fall a break a hip! Is it really necessary to have a tv camera and commentator focused on the president as he exits the stage?  It’s mean spirited to highlight physical disabilities.  We all recognize the fact that Trump is no longer young. Some physical frailty generally comes with the territory.

A few months ago when I was in Japan, we had dinner around a table sunken into the floor.  Arising from dinner was no easy feat (unless you were Japanese). I made a few sad attempts to joist myself up, ending in failure.   Finally, I turned to a friend and had to ask for help in getting out of the hole.  I was embarrassed and humiliated, but no one in our group pointed a finger or a camera at me!  When I got home,   I learned that some of that difficulty can be reversed.  I worked with a physical trainer for a few weeks and quickly recovered my ability to stand up from a seated position on the floor.  YAY!

Where has kindness and decency gone in the political arena?  Do we all agree ageism should be unacceptable?

A part of me, my less mature self, says that our nasty leader just gets what he deserves.  But my mother taught me well that two wrongs don’t make a right.  Pointing out or ridiculing aging characteristics in people is not going to improve their health.  Nor will it improve the well being or karma of the shamers!

The WHO (World health Organization) began a campaign against ageism in 2016 after recognizing it as a serious problem.  At a minimum, I think each of us needs to call it out when we see it or experience.  Awareness first.

Can I talk for a moment about covid hair fatigue?  Unable to get a haircut since the beginning of the covid crisis, I could easily decide that my self interest is best served by remaining hidden. Recently,  a small voice inside me tells me I’d better get out of the house for a while.  This desire must always be explained to my family who seem in agreement with each other that the moment I leave our premises, I am at risk of losing my life. Ultimately, after promising and re-promising, I’ll be careful, I am released.

I thought I could make things better by adding a  pretty scarf tied jauntily around my head.   The scarf  was a beautiful water blue silk and I tied it in a floppy bow at the top of my head.  Other than highlighting the bluish circles under my eyes, it just looked ridiculous. My own ageist biases quickly told me I was too old to try such pranks with any hope of fooling the eye. Better to look honestly and painfully  as if I were suffering from the covid seclusion. Perhaps that’s too Victorian a slant on my current non-condition?  ”  “I’m getting my hair cut next week,” I tell myself.  The bobby pins, purchased on another covid infused outing, failed to help as well.

I just remembered that I have an old red haired wig stuck in the back of a closet somewhere.  I had fun wearing it occasionally about a decade ago. As long as mice haven’t taken up residence, I might give that a whirl.