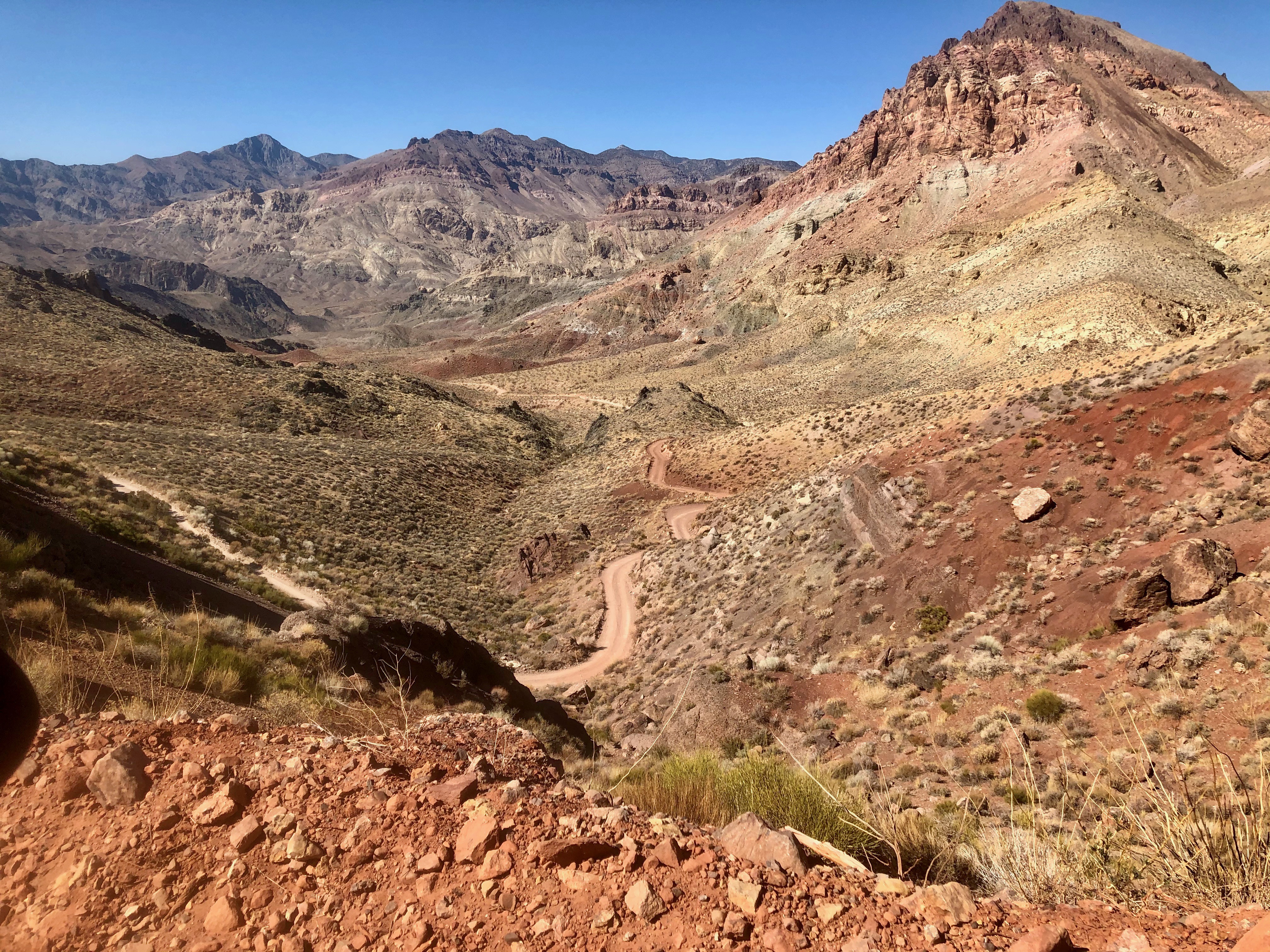 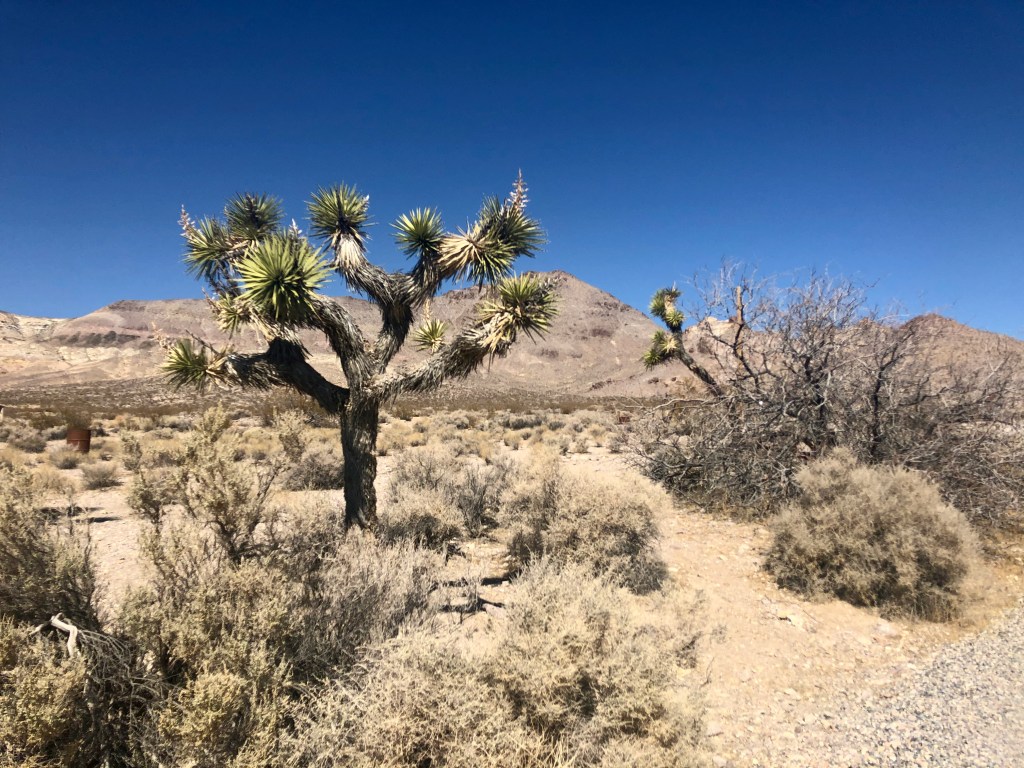 Truth be told, I’d forgotten what the early morning looked like and felt like.  I’d been avoiding it for many months, sleeping late and generally showing no  interest in experiencing the early hours of the day. 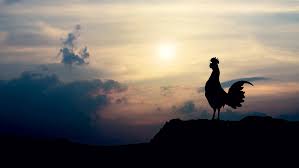 Yesterday I had no choice but to get up early so that we could leave town on a planned getaway to drive to Death Valley for a few days.  It’s about a six hour ride from Santa Barbara.  I was genuinely surprised to take delight in the early morning.  It was fresh, no doubt about it.  Innocent too, of any experience.  A blind slate just waiting to be written on? Early morning  was something to view again with fresh eyes of those awakening from the long covid nightmare.

Getting out of town was a minor triumph during this time of covid. Something not even to consider for many months. This was my first journey outside of town in a full year. You’d think I was on my way to the moon, given my time taken packing. Silly. We did leave on time at 9am as planned, however.   By the time the scenery changed from the familiar to the unfamiliar, I was fully awake. I actually felt excitement. I paid closer attention to our surroundings. Maybe just a minor  jolt for the brain, but a welcome one.  We’d only gone a few miles.

As we reached the edge of the Mojave Desert, new towns greeted us, edged by the usual corporate trash.These are boring spaces in my opinion, showing no imagination, only a desire to provide some shelter for new arrivals to California and make money while doing it, while providing some illusion of status.  Cookie cutter subdivision after subdivision.   It must kill your soul to live in these places, thought I.  I’m too damn privileged, was my next thought. However,  I’m sure these homes felt like palaces to many.

On either side of these so -called towns, lay the desert.  Beautiful by itself when not marred by insensitive development.  Edged by mountains. On and on literally as far as the eyes could see.

By late afternoon, we were finally in Death Valley.  I was stunned by the enormous scale of it and the monotony of it. Dwarfed by the massive space and endless vistas.  I found myself trying to imagine myself as a settler trying to trek through this landscape.  The setting gives no hint of a way out.  Suddenly I had lots of questions about those early pioneers. Were they tailed by hostile Native Americans? How did they endure the heat?   Were they haunted by the suspicion that they might die in this place? 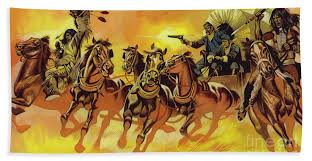 I should be back in the 4th grade.  No matter, we arrived at Furnace Creek.  A very civilized place to spend a few nights.  Let’s call it an oasis!

This morning we left the compound at 9 am.  We drove in the wrong direction for at least a half an hour before realizing our mistake.  Making a u-eee we headed back in the correct direction to the salt flats.  Then onward to the artist’s vista, a drive into the colorful hills, of many colors on display in the hills.  I had visited this spot many years ago, but strangely nothing looked even remotely familiar.  I do remember feeling unimpressed by it the first time.  This time, I was in awe or close to it.  What was different that caused such disparate responses?  I can’t say.  The colors on the rocks appearing in large blotches or streaks were blues, rose, peach, chocolate brown, even magenta.  They fascinated me.  All from chemicals or chemical reactions in the rocks.  It was visual feast.

Zabriskie Point was another place that left me unmoved on my last visit.  Now it sang to me. The tired adage that pictures won’t do it justice is very true, but I tried taking photos anyway.  There was a small hill to climb to get to the vista point.   I took my time and l did it.  Small victory against my asthma war. 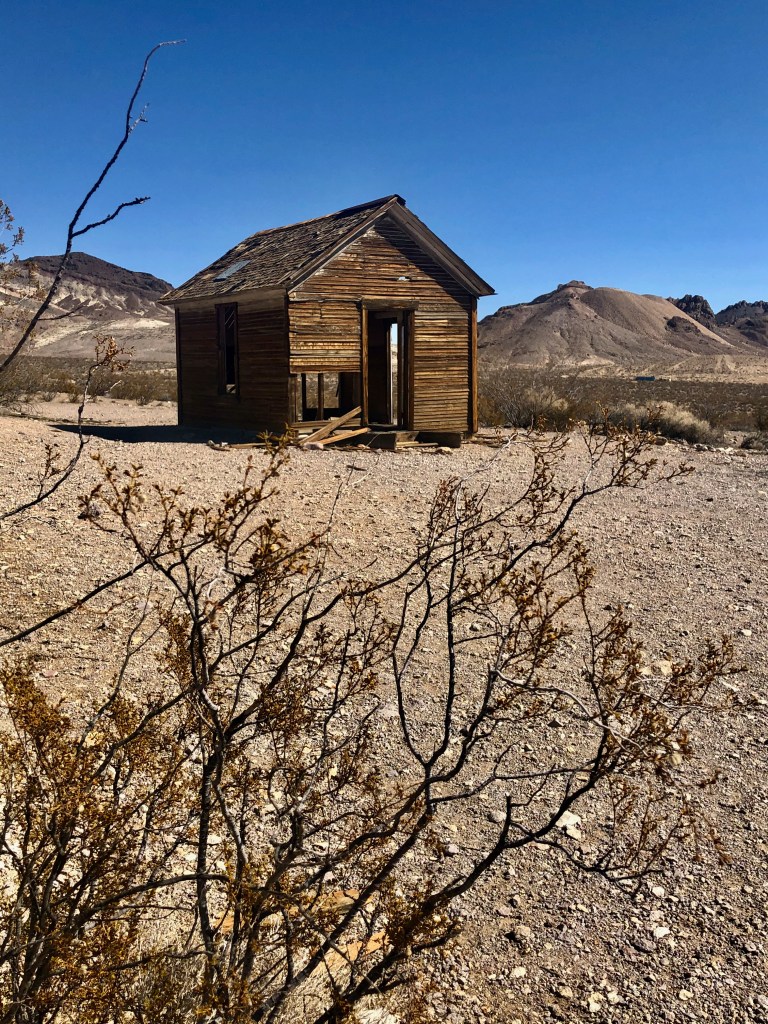 Today was our last full day here.  We drove out to a ghost town near the Nevada border. Several impressive buildings were still standing as a reminder of what was.  This place had a short shelf life I’m afraid, less than a century of existence before it was abandoned. The search for gold managed to deliver a brief time in the sun, at least for some. The setting was spectacular, but truly in the middle of Nowhere.  I would have loved to be able to drop into an average day spent in this place. Again 4th grade stuff.  I should make a diorama.   The train terminal hinted at the fact that the founding fathers of this town probably had big plans for the town and an inflated sense of their own importance. 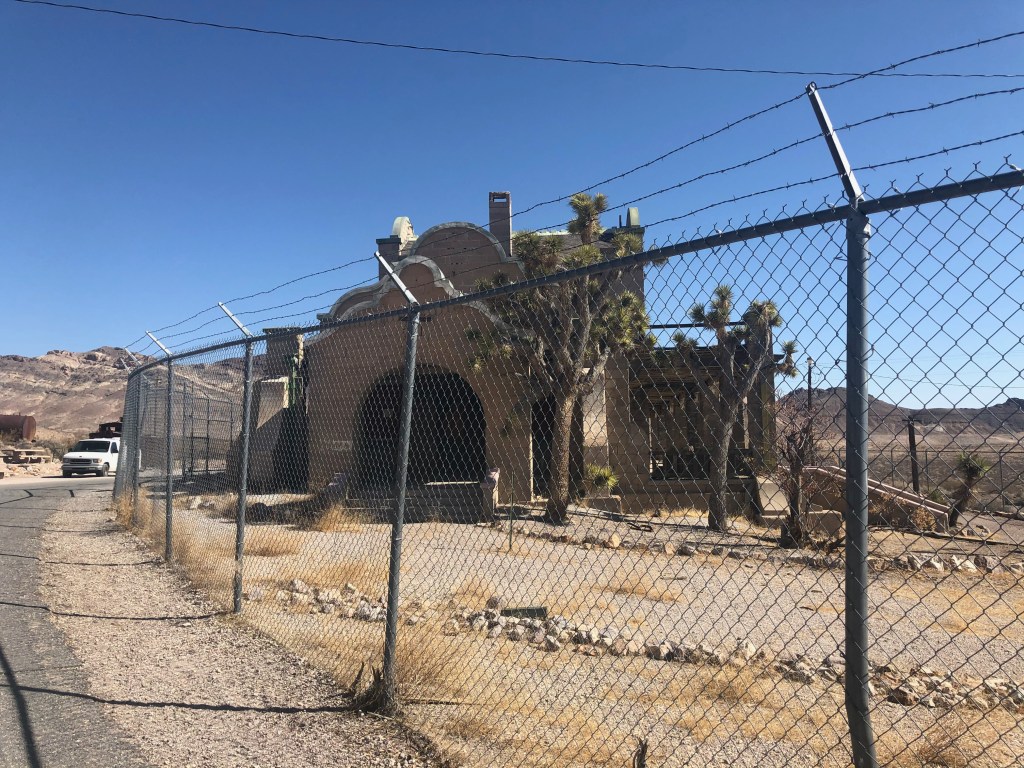 After eating lunch at an old chili restaurant just over the border in Beatty, Nevada, we parted ways with my daughter and granddaughter.  We took one of the remote roads, requiring 4 wheel drive, through the mountains to return to Furnace Creek. They went back to the hotel by the way we came to have some sensible swimming time.

A THRILLING AND TERRIFYING RIDE

I reminded myself when faced with the challenging ride, that I was of the age when it didn’t make sense not to do it just because I feared the outcome!  My husband drove, appearing to smile.  “No, I’m grimacing,!” he told me when I mentioned it to him.  The washboardroad snaked up and down through the edge of the mountains.  Strict attention had to be paid, because loss of attention could be fatal.  Easily. Danny’s grimace stayed put.  The palms of my hands stayed damp. 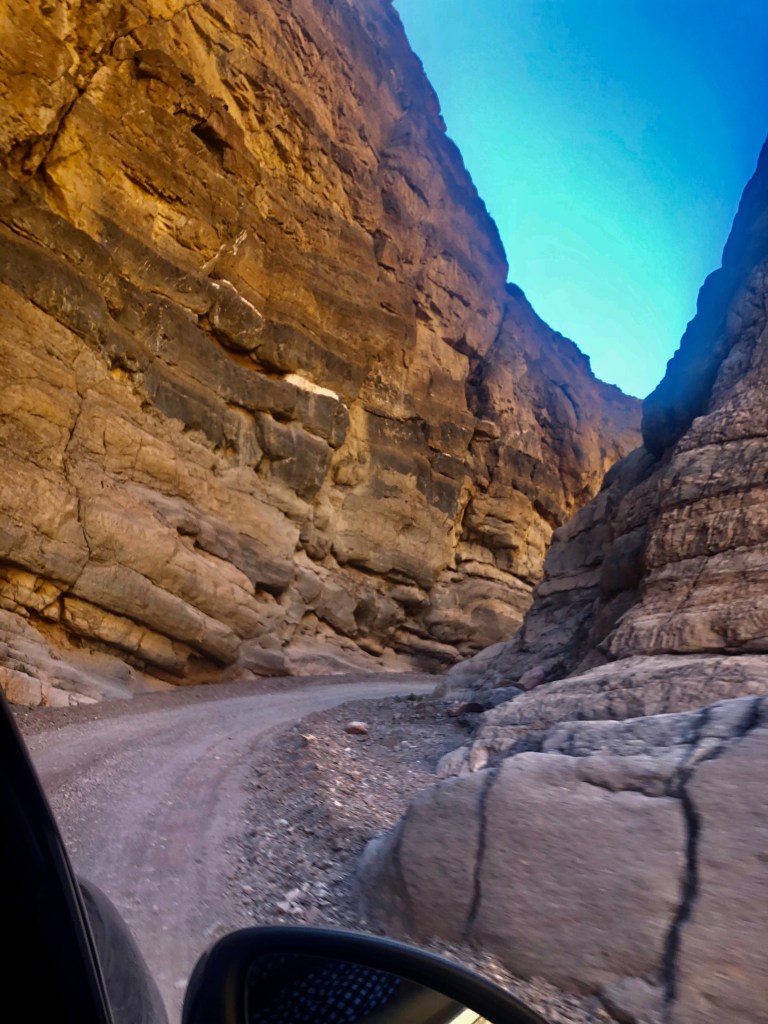 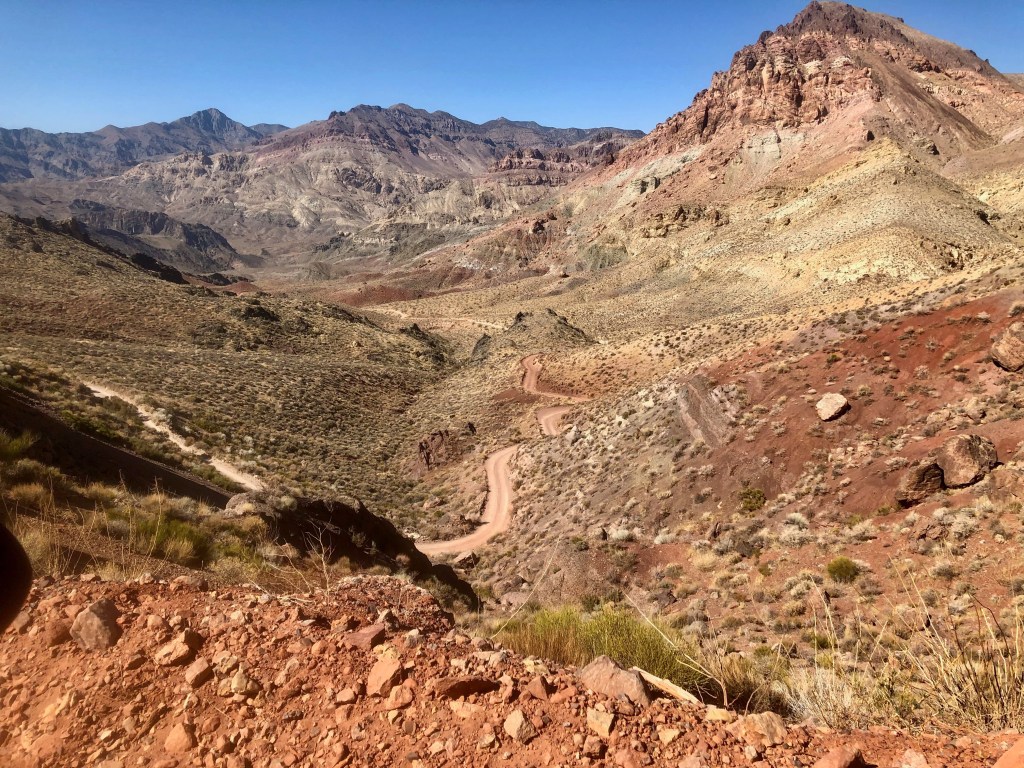 We could have been in the scene of an old Western.  If bandits appeared around the next curve, or Native Americans hijacked us, I don’t think I would have been surprised.  Not delighted either.  So it was after several hours of on-your-guard driving that we at last emerged into an open landscape, out of the spectacular but menacing canyon.

I needed some ice cream.

Yesterday as we drove away from the Valley, I remembered that my husband had expressed a desire to see some wild burros.  Within the hour, as if on cue, there they were. A family of burros.  Just hanging out.  What?  Them nervous? 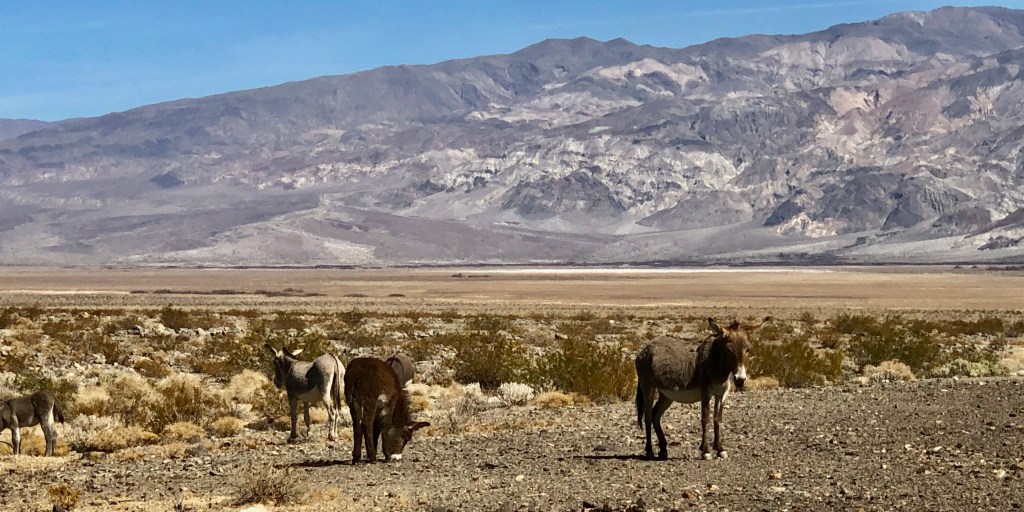 “We passed the great arid deserts of the West, driving through canyons and beneath rocky outcroppings and over great crevasses. We drove through the Mojave Desert, Owens Valley and Death Valley, and the dust entered our bloodstream and flowed through to every part of our body. The West was both eerie and breathtakingly beautiful, and we wanted to live there forever.”
― Karl Wiggins, Wrong Planet – Searching for your Tribe