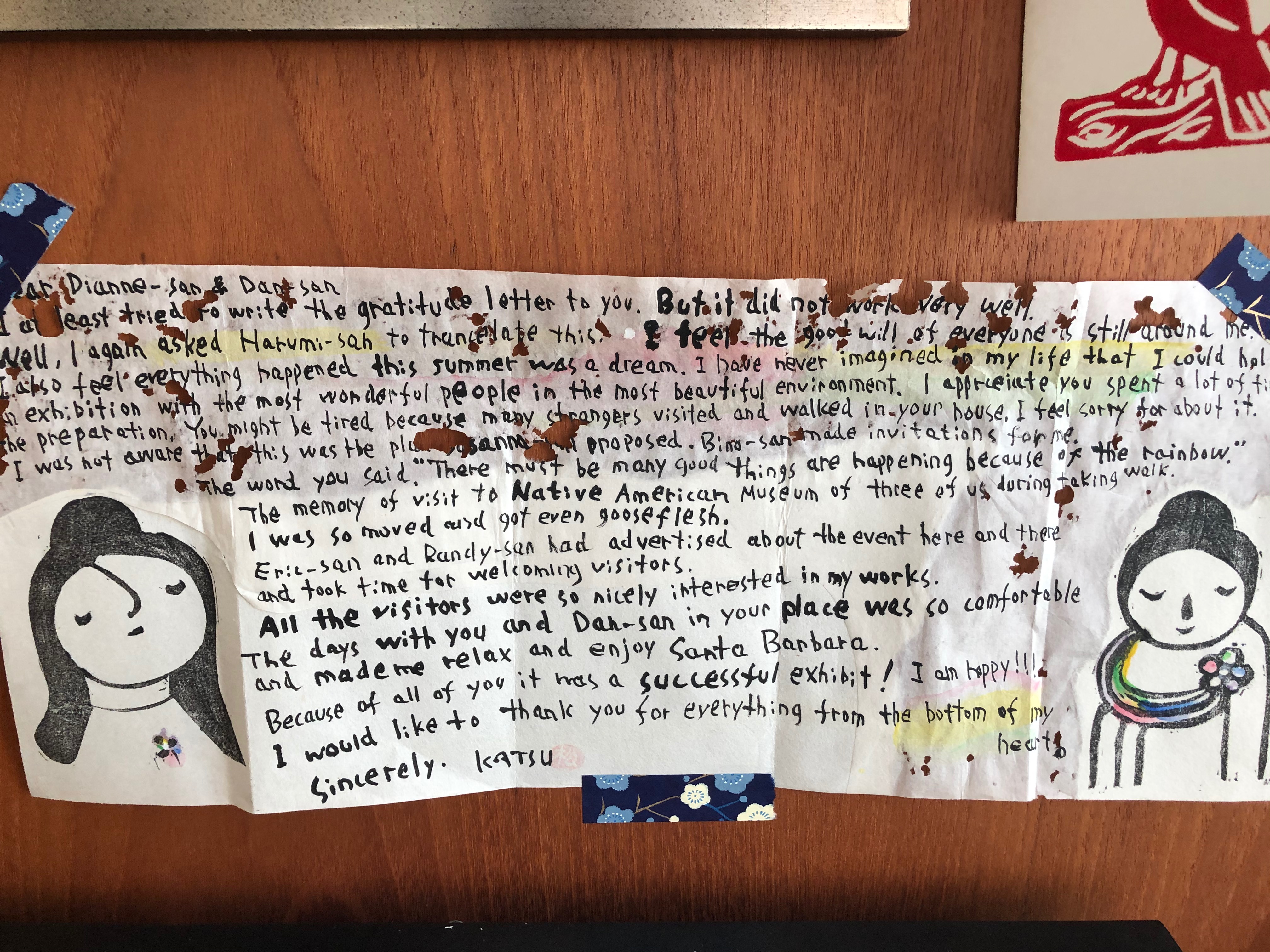 A book I’m reading suggests that to live life fully, we look for a miracle every day.  I just finished reading that advice about 8pm,  “Too late for today,” I thought.  I lay down in bed, facing a wall of art I’ve been slowly installing.  It consists of photos, momentos and original art works that have had meaning in my life.   I’ve been looking at them for several days now and know that they bring me pleasure.  But strangely enough, when I gazed at the wall tonight, I saw that all this pleasure gathered in a lifetime was nothing short of miraculous!

Coral Gables, Florida:  The images begin with an illustration we found in a junk shopin 1963,  the first year we were married, while living in Coral Gables, Fla. It’s a sensual, mysterious image; why? because its meaning is unclear.  It almost looks as if the beautiful woman is about to seduce the fox she’s holding, and gazing at so lovingly. But that’s a little too outrageous to really believe.   The hat she’s wearing suggest the 1920’s. We purchased the piece for very little, brought it home and have pondered it ever since, still as strange and mysterious and intriguing  as it was the first time we saw it so many years ago.  Equally interesting:  What’s the history of this?Does it hang vertically or horizontally? 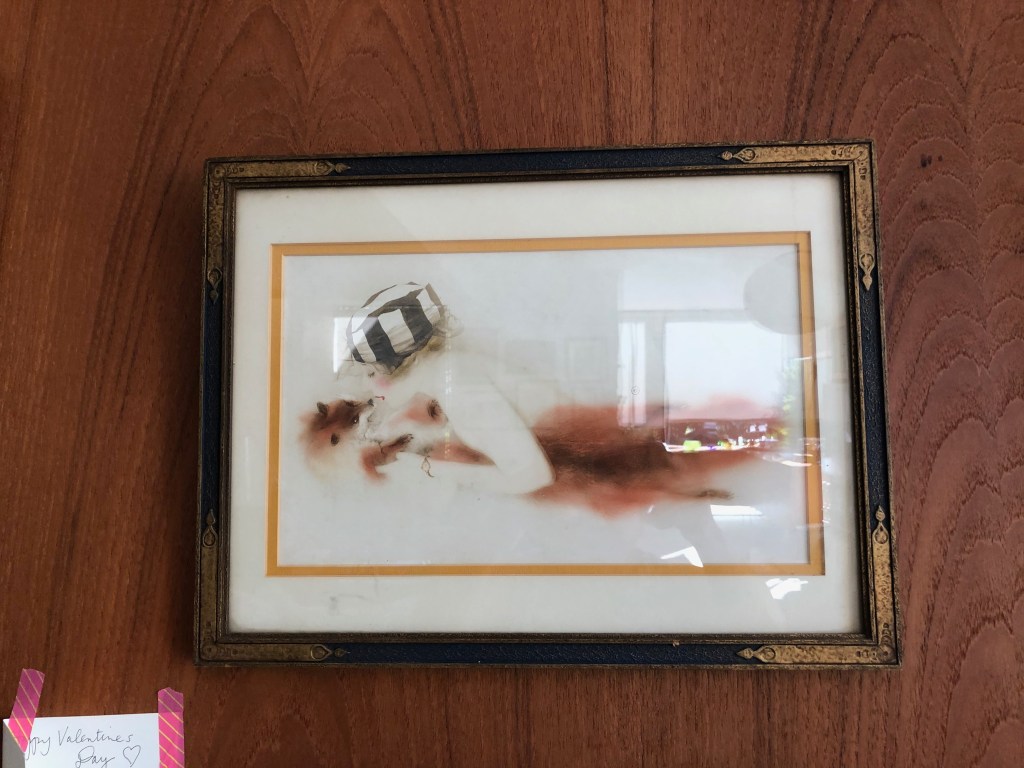 Provincetown, Massachusetts: Moving along in a somewhat chronological order, is a print I found in an old book about New England, my place of birth.  It shows two men walking on the arm of the cape, pointing to Provincetown, which would have then been a settlement on the tip of the Cape.  In my teens, as a New Englander, Provincetown  represented all that was beautiful and wild. I was very attracted to it, but also a bit fearful. Who knew what lay beyond or behind the dunes?   My best friend spent the summer bartending in town.  My mother thought no self respecting Jewish Mother would ever allow her daughter to be a part of that environment. I ‘m a little grateful to her today for keeping me from exploring the wilder side of myself.  Needless to say, my best friend wasn’t Jewish!  Today this print represents the New England I left, but will always feel a part of. 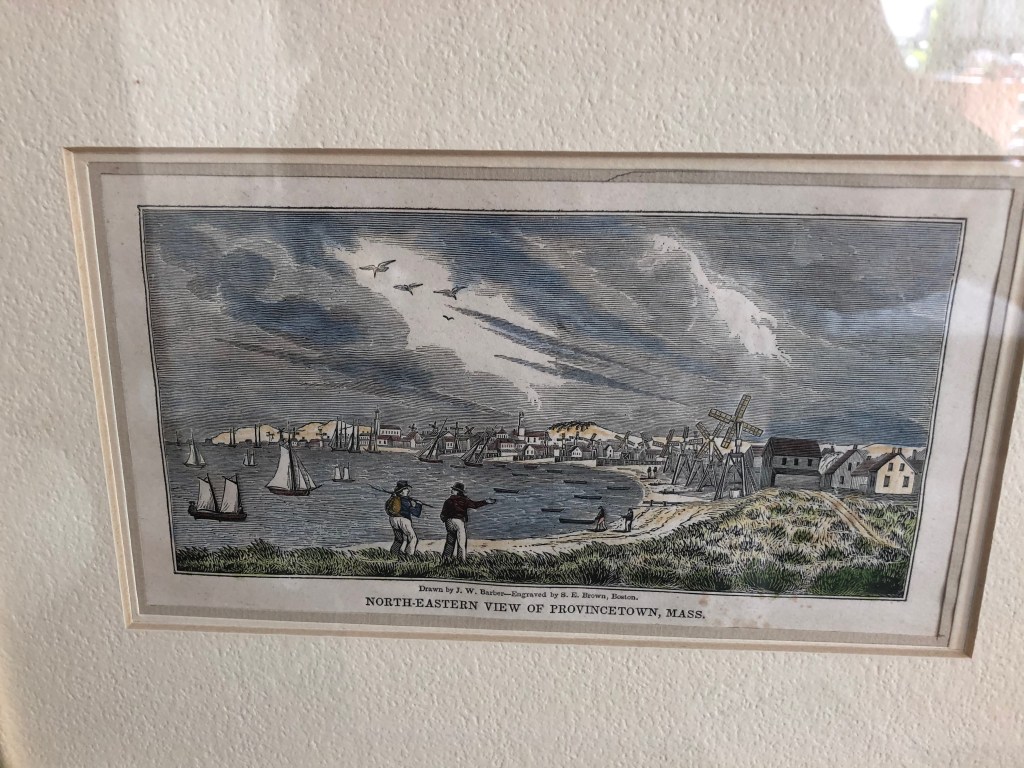 I was told by the shopkeeper in the Turkish Bazaar in Istanbul, that the words etched here read: This too shall pass. At the time I purchased it, continuing to this day, I get comfort from this. 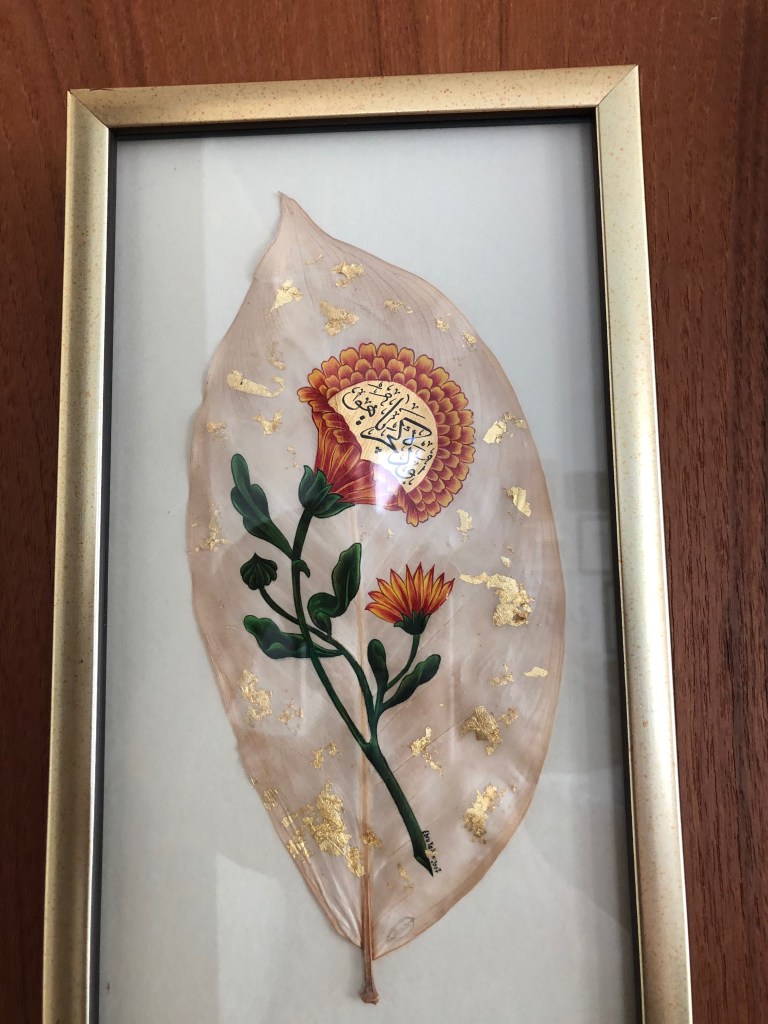 Kyoto, Japan:  Whenever I am in Kyoto, I make certain I am at one of the two monthly flea markets, which never fail to thrill me!  Last time I attended, I purchased some small scraps of vintage kimono, then had them framed upon return home.  They serve as a reminder of what awaits for me on the other side of the Pacific Ocean once Covid gets resolved. They also remind me of an alternative artistic sensibility which permeates the every day in Japan.  How miraculous that I get to experience it and then try to absorb it. 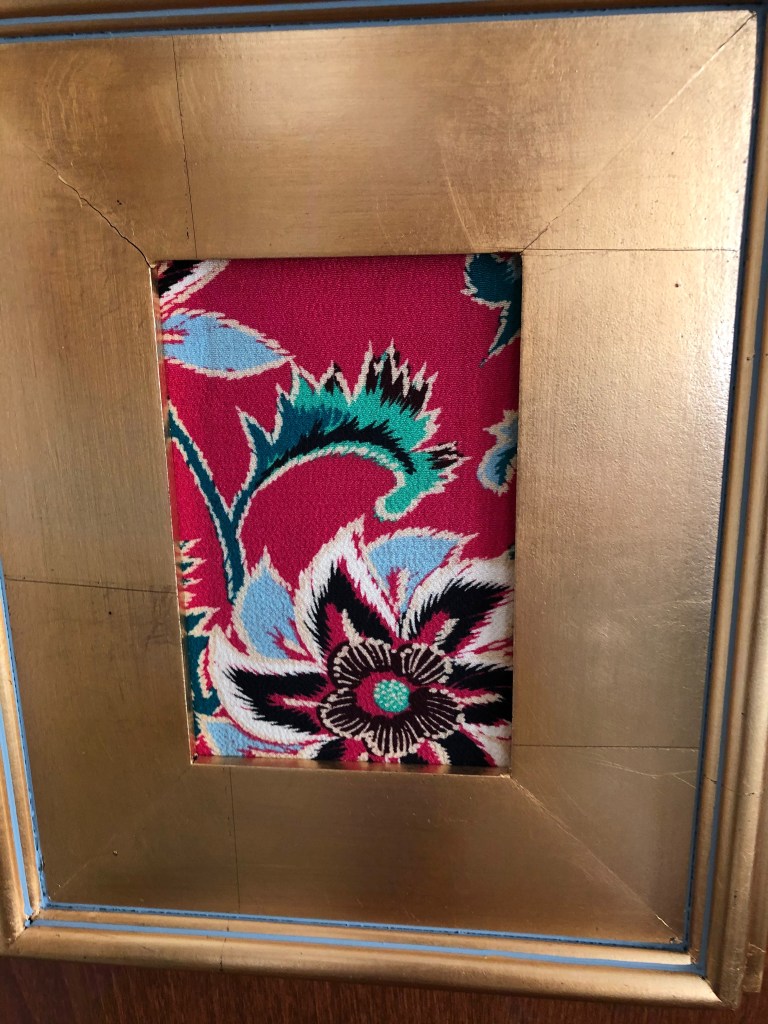 The art island of Naoshima, in Japan,  is a place unlike any other. What a miraculous vision it took to bring this place to life!  The last time I was there, I saw a moving exhibit by the artist Yasuo Kuniyoshi.http://Yasuo Kuniyoshi.  It was fascinating.  He was a Japanese ex-pat, living and working in NYC at the time of WW II.  He was a man torn by his dual identity, American and Japanese.  I found a print of his online and was thrilled to make it mine. 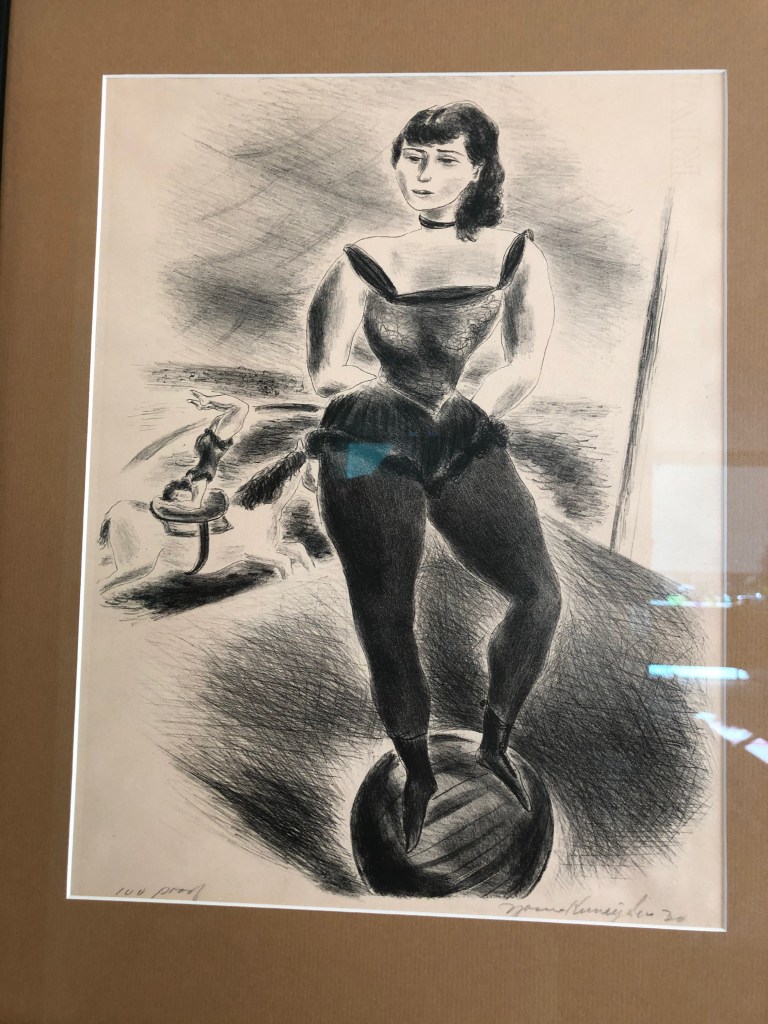 Matsuzaki-san!  Perhaps most miraculous of all in my assortment is the letter I received from a Japanese  artist I met who was exhibiting in NYC!  It was a completely random encounter. He is now one of my best friends in Kyoto.  We never visit without spending time  with him and seeing his new work.  I had a garden party exhibit for him when he visited me in CA several years ago.  HIs friendship is truly a miraculous gift!  I think both of us are amazed by it.

So I found many miracles once I started looking. I went to sleep blessed by gratitude for all I’ve witnessed and experienced in eight decades. 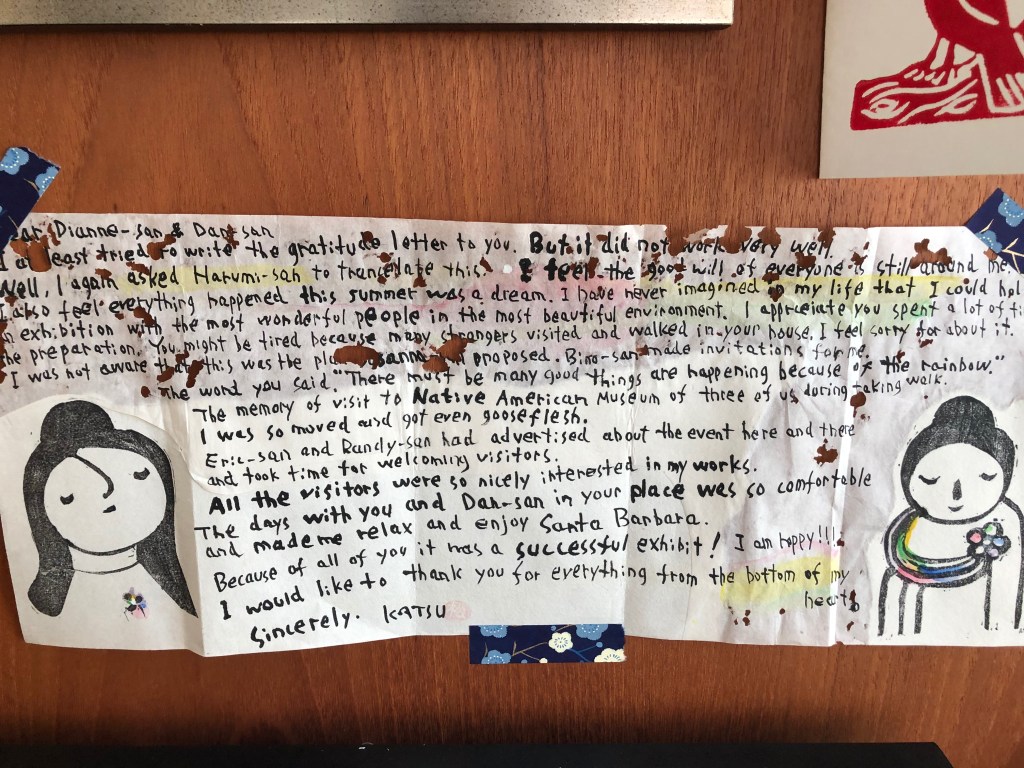