Guilty.  That is, I’m talking about my smart ass husband.  This is his story, but since he doesn’t blog, I decided to do a take over.  Don’t get me wrong.  I witnessed the transaction so this is definitely a first hand account.  I didn’t have anything very interesting to offer on my own, so I’m relating this. 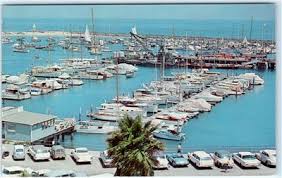 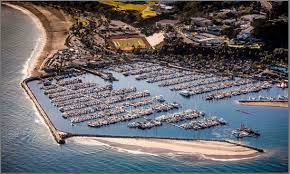 Last week, we went for a stroll down by the Santa Barbara harbor.  We found a bench on which to park it to watch the comings and goings at the entrance to the harbor.  We sat in silence and watched the ocean activity for a while.  At some point, my husband announced, “Here come the Santa Barbara black swans.”

I thought he was kidding, but sure enough, I soon noticed a group of four black duck-like creatures-but-not-ducks in the water.  Within a few minutes, a man standing close behind us echoed his pronouncement.  “Well, here are the black swans!”  The man looked somewhat official, wearing a self styled khaki uniform  and a ranger style hat,, carrying a big net.  As soon as we turned his way, he continued talking, telling us his theory of how a bird native to Australia and New Zealand, landed beside us in Santa Barbara.  “They lost the jet stream,” he said.  He went on to say that it was his job to keep an eye on them, and he shooed a few small groups of children away from the shore.  When queried, he told me he worked for the SB Wildlife Care Network and that the swans arrived on the scene yesterday.  He then went on to tell us their feeding habits.   He started coming up with other theories about their origin.  He obviously took his scouting duties very seriously, as well as his way of dressing!

I could feel my husband growing more interested in this man by the minute.  And not because of the welfare of the birds.  I think he must have decided at some point he was as official as this chatty  volunteer was. As the volunteer was hypothesizing about the swan’s home country, suddenly my husband, came up with another story. Maybe they belonged to Oprah?  Our volunteer wasn’t buying.  Then my husband got more creative.  He  told the man that the Brits like to keep swans.  Perhaps, these swans were kept by Prince Harry and his lovely wife Meghan, and perhaps they just flew away.  Maybe they were a wedding present to the royal couple?

Suddenly, the volunteer became very interested in my husband’s musings.  Seeing this, my husband kept embellishing his swan story,  as he enjoyed himself more and more.  My role, understood over many decades of marriage to this man, was to agree with him, nodding enthusiastically, but not saying much. I liked seeing him have such a good time.

The volunteer listened intently, ultimate telling us that he was a very busy man and had to move on.  We toll him we understood.  We all parted ways.  My husband and I speculated that perhaps the rumor had been seeded.

Sure enough, a few days later, according to KEYT, the tale of the black swans was reported.  Dan’s hypothesis  was in there too.  We both had a good laugh.

Since then, I’ve read a few reports about these creatures.  This one from the OCRegister  sounds the most promising, especially since it didn’t originate from my husband!