Every year, on the 4th of July, despite my protests,  my mother would proclaim, using her most dire voice, “The summer is half over.”  I always expected to hear this but never liked to.  Her sense of foreboding lasted all her life, as I recall.  Despite her passing several decades ago,  I can still hear her making her solemn proclamation.  It always made me want to cover my ears.  But then, I lived in Florida and had no fear of winter.  But I, too, love the joys of summertime.  Who doesn’t?

What is it about summer?  Why the nostalgia?   I noticed today that July will be ending soon.  I’ve already seen mention of Back to School, and even preparation for the Christmas holiday. Just saying it’s “August” contains the knowledge that summer will soon be over.  Long days gradually will disappear until they become an almost unbelievable memory once the skies darken at 4:30 in the afternoon in the winter.  The titillating sense of possibility that exists during summer months, will vanish.

I remember when summer always brought with it a few songs that celebrated the season.  I’m thinking classics like, Summertime from Porgy and Bess, as well as Summertime, Summertime by the Jamies, and  Surfin USA by the Beach Boys.  Who can forget Twilight Time? It took over an entire summer in 1958.

The first summer song that I remember hearing was Sh-boom by the Crew Cuts. I was captivated by it. Most likely, it was the first do-wop song I’d heard, and it made a BIG impression on my young teen mind! It was a new sound.  I was present and paying attention at the birth of rock n roll in the white world. My parents had rented a cottage at the beach in Connecticut, and Sh-Boom was on the juke box of the corner luncheonette and I would go to the luncheonette just to play it.  Under the Boardwalk by the Drifters came later. It didn’t make me want to go under the boardwalk, but served as a good summer’s anthem.  There were others to follow.  I took them all seiously. 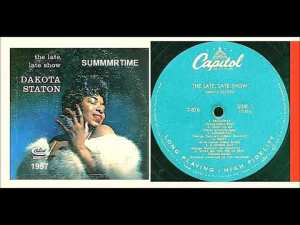 Vocalist Dakota Staton did a swinging cover of Summertime with George Shearing that to my mind is still untouchable. I played that cut hundreds of times on my little stereo in my big bedroom.  You never heard Dakota on the radio.  I still lovethe sultry sound.  Something Cool by June Christy was a sophisticated song about the sadness and longing that could accompany an older woman during summer.  It was the essence of cool.  Fortunately, I was too young to identify with it, but I liked its sound.  Still do.

Summer days were spent planning with friends how to meet up with the boys in the evenings.  In junior high, this meant gathering at a friend’s house, spinning some tunes and waiting to see who else showed up.  At some point, the door to the room we were in was shut.  the friend’s parents, who were probably just pleased to know where we were, left us alone.  Ultimately, there’d be a make – out session that would round out the evening.  It was different each time. When it ended, the day was over and we’d all head for home.  It was pretty chaste.

In college, I could easily get my parent’s car, pick up a few friends and make the short trip to a jazz club in the neighboring town.  This really never led to anything, but it did have a sense of adventure to it and satisfied my desire to be just a little naughty and go outside the tight prescribed boundaries.   It was a club that my parents would never have approved of.  The reality was that it was harmless but it had a few dark corners. we knew enough to just listen to the music, and smoke our cigarettes.

One summer, I made it to the Newport Jazz Festival.  I thought I was hot shit, even though I was with a small group of young women, friends of my cousins, who didn’t know jazz.  I considered myself an afficianado.  I soon found a way to ditch the group I’d come with and not see them again.  I had a little trouble getting home, but I managed.  I also stayed up all night, drank gin from a straw inserted in a watermelon, and decided life was good despite the fact that I was going to hear about my desertion of the group.  (It was a cousin.)  I did.  But I’d also gotten adept at lying to cover my ass when I had to.  I believed as far as my parents were concerned, ignorance was bliss.  I still think that’s accurate.

Miles Davis was already a superstar in my mind in those years.  HIs music transported me.  He was unpredictable.  You never knew whether or not he’d show up, as I remember.  That was part of his mystique.  To be perfectly honest, I don’t remember whether I heard him play at Newport or not!
Looking over my shoulder, I can see that these were precious years.  I made the most of them, I believe.
Only a summer’s day or a summer’s night could have been the background.