Skip to main content
Close Search
deathGrowing Up in the 1950's

By Dianne VapnekNovember 28, 2021No Comments

There was no doubt about it.  The school custodian was sweeping the halls and crying.I was  on a brief break from my 4th grade class.  It was such an unusual scene, I decided to inquire.  “Mr. Rueda, are you all right?” He looked up with pain in his eyes.  “The president has been shot and wounded,” he told me.  It seemed like he was the first at school to know. Looking at him in disbelief, I managed to mutter something and hurry back to my class. That moment changed the world as well as me personally. I could no longer think of my youth as an unending state of being. 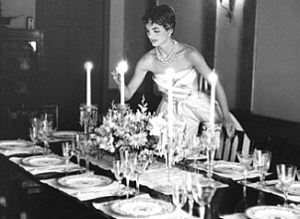 Somehow the day continued.  Somehow the school day ended.  I cannot remember if the kids were told the horrific news in school, or if they were just released. I remember feeling disbelieving, waiting to find out that there had somehow been a mistake made in reporting the dreadful news. I went home and turned on the television. Walter Cronkite was reporting.  The news was in. Young Jack Kennedy had been fatally assassinated.  Camelot had been cut down. No.  No. No. I didn’t want to hear it. My husband came home from work early.  We were both shaken to the core, but it felt good to have company. Television was now the playing the role it was cut out for.

Somehow we went out to eat at a nearby deli.  That seemed wrong, wrong, wrong as well.  People carrying on as if it were a normal evening. The truth was I didn’t know how to respond.  The world was suddenly seemed  bifurcated; those of us who felt deeply wounded too and those who either didn’t know what had taken place in Dallas, or who knew, and didn’t particularly care.  I wanted to be with a group of people, but not a group of ostriches.

I stayed  glued to the tv the whole weekend. It was equally horrifying and fascinating.  Jackie had been suddenly transformed from the nation’s glamour puss into a grieving widow in a blood stained suit.  She managed to represent all of us with so much dignity. 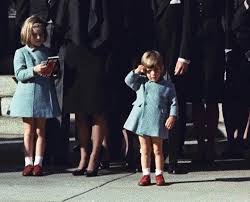 John Jr. saluting and Carolyn standing beside her mother cloaked in somber black.

LBJ was sworn in as president on Air Force 1 as I watched on tv.  Lee Harvey Oswald, as he was being paraded around during custody, was shot at point blank range by another nutcase named Jack Ruby suspected of having ties to the mob. 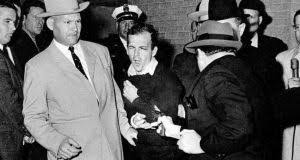 The shooting of Lee Harvey Oswald as seen on tv.

I watched as the president’s plane as it landed back in Washington. Somehow Jackie held it together.  Her small children. in matching blue wool coats, seemed overwhelmed and obviously couldn’t  comprehend the enormity of the moment,  but played their role perfectly as the pageantry mingled with the anguish of laying Jack Kennedy to rest and moving the country forward.