By Dianne VapnekMarch 15, 2022No Comments

Holyoke, Mass.  Coming in for a landing at nearby Westover AFB, the B-52’s felt to me as if they were about to land on our roof!  The roar of their engines was deafening and angry. One day, when I was tucked in my mother’s bed, sweating out a fever, a monster plane flew over on its descent into the AFB.  In my feverish state, I was particularly terrified and let out a blood curdling stream.  I have no doubt that had the pilot been listening, he would have changed course immediately.  As it was, my dear mother heard me, and must have become terrified herself.  Consequently, she immediately called Westover to lodge a complaint.  As I remember, the scream – provoking flight was the final one over our house.  Don’t get a mother angry! 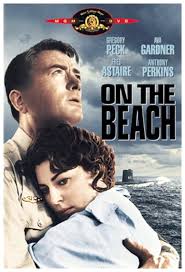 Also, in that Cold War era, the film On the Beach provided post apocalyptic images of a post nuclear world war that were scary, to say the least. We took it to heart. A girl friend of mine and I talked about it constantly. Yes, you, Nancy!   Duck and cover drills were practiced periodically at school.  To this day, I can’t figure out what kind of protection a school desk would provide during a nuclear attack.

I saved a newspaper that announced the death of Stalin. The headlines were in the largest, boldest yet somber type available.  Stalin is Dead, it read.There was no question that the Soviet Union was our ENEMY. It’s been shocking, in recent days, to realize they still are!  I had myself believing that those days were behind us.Slip sliding away…

It was not at all difficult  a few decades later to believe that such an appalling reality could be averted if I worked hard enough to help a lot of people realize that because of the nuclear arms race, war had become obsolete. There would be no winners.   The organization Beyond War provided me with all the tools I needed to try and convince people that was so. As a volunteer with that organization, I worked to help educate people about the dangers of war in a nuclear age for over a decade.  I was 100% convinced myself.

I think I must have become obnoxious with my proselytizing. I lost some friends in the process.   One of my best friends from college, told me outright that I’d become intolerable. That shut me up quickly., although It took me several years to agree with her!  There’s nothing worse than self-righteousness.  Well, maybe there is.

However, my anti-war beliefs continue to remain strong and have stood the test of time. You probably can easily guess that the Ukrainian War makes my hair stand on end.  The destruction caused so far as shown by CNN on TV has greatly saddened me. I am now just a powerless onlooker. Or, I feel that way.  So many lives have been upended.  The Images of a few Russian soldiers I’ve seen make them look like young boys who have become pawns in this ugly war.  They are most likely terrified as well.

I think it’s up to us to let our feelings about such direct aggression be known.   Taking action helps me feel better!  Please join me in trying to make our planet a safe place to raise our children and grandchildren, in whatever way works for you.

Move On has a few suggestions that might appeal to you.  Best if considered while singing “Let There be Peace on Earth.”

I read an article in the New Yorker yesterday which stated that we are as close  to nuclear war as we were during The Cuban MIssile Crisis.  Weirdly enough, I was living in Florida at the time of that one. Too close to Cuba for comfort!  Just out of college and not ready to die.   Many years have passed since then.  The world is no less dangerous.  JFK”s words still resonate and are just as relevant today.  President Kennedy told Americans in June 1963, “For, in the final analysis, our most basic common link is that we all inhabit this small planet. We all breathe the same air. We all cherish our children’s future. And we are all mortal.

Many years have passed since then.  The world is no  less  dangerous.  JFK”s words still resonate and are relevant.

JFK”s words still resonate and are relevant.”So let us not be blind to our differences, but let us also direct attention to our common interests and the means by which those differences can be resolved. And if we cannot end now our differences, at least we can help make the world safe for diversity. For in the final analysis, our most basic common link is that we all inhabit this small planet. We all breathe the same air. We all cherish our children’s futures. And we are all mortal.”

East and West keep that in mind!