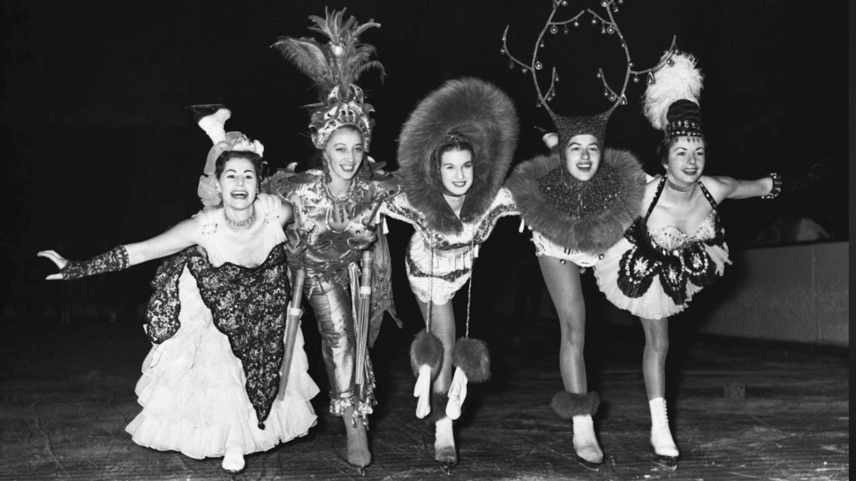 By Dianne VapnekDecember 21, 2022No Comments

Prologue:    Being Jewish at Christmas time in the 1950’s while living in a mostly Catholic community was not easy.  Where do I belong? was a question I asked myself frequently. Parts of the holiday were enjoyable, but mostly it was “Look, but don’t touch.”  Easier said than done, especially for a visual child who adored decoration and didn’t really care about the religious story.No one tells you when it is safe to jump on or off the merry sleigh ride.  If your timing is off, you could easily get singed.    AS in moth flying into a flame,   it was a flame, have no doubt about it.

In school I spent far too much time idly drawing Xmas trees, while copying in my best penmanship, the lyrics to Frosty the Snowman.  That assignment probably struck my fifth grade teacher as a brilliant way to  keep her students busy.  The most tortured moments of the season would be at an all school assembly singing Xmas carols.  Everyone was expected to bow their heads at the mention of Jesus’ name.  I worked hard to give a small nod which allowed me to “fit’in” without being a “sell-out.”  That swas the name of the game.  But it was game that if you were Jewish, you might as well accept it as a no-win.

I found a little niche for myself in wrapping our family’s holiday gifts.  I could dabble with some decorative elements without selling out.  People would admire my handiwork.  I admired it too.

Little Known Factoid:  I knew all the words to almost every Christmas carol. I studied the lyrics which were printed annually in our local paper’s Xmas Supplement.

The folks at South Park wrote a song about being a lonely Jew on Christmas.  Watch it!

Before I settled into my role as Designated wrqpper I had to earn it. I often trekked downtown  (downstreet to New Englanders) to fondle the unwrapped Christmas ornaments, etc. that were readily accessible in the local 5 &10’s.  Newbury’s was a favorite hangout.  Lots of stuff!  With only a  few salespeople to ask if they could help you, Shop at your Leisure..  Nothing wrong with Woolworth’s but their inventory wasn’t as extensive. https://notoutyet.com/2021/11/07/xmas-guide-for-t…s-often-confused/  Nobody asked what religion you practiced  or asked   what you were you doing at this counter. 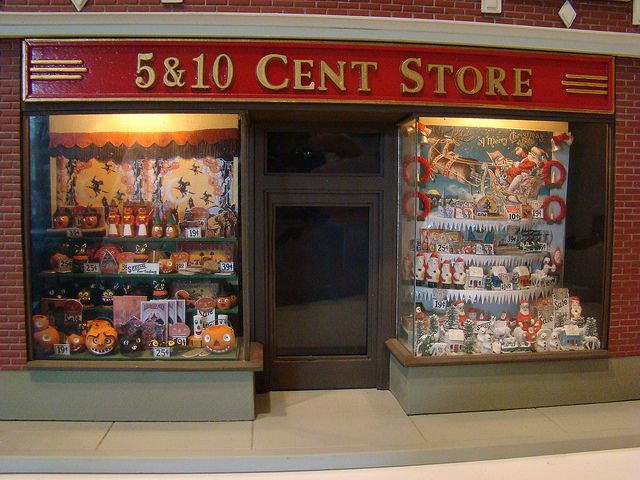 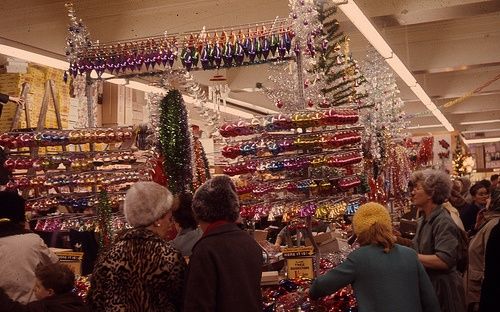 I’d only have a few dollars with me, so I might buy some artificial snow but that was usually about it. About it until I was given free rein to wrap my family’s Chanukah/xmas gifts.  Then I went all in  for the ribbon, even a few ornaments , jingle bells and of course, the wrapping paper.  For a short while I could pretend to be in on the Christmas  fun and not feel guilty about it.  As I remember I was always by myself.  After all, this was essentially an artistic outing and I did not require input from anyone, nor did I want it.  This was a solitary endeavor.  I liked it that way.  https://notoutyet.com/2021/11/07/xmas-guide-for-t…s-often-confused/

Here’s an example of a 1950’s paper featuring Santa himself, with a a cameo of Rudolph (sans red nose, so maybe not Rudolph?). (Close look like though.) 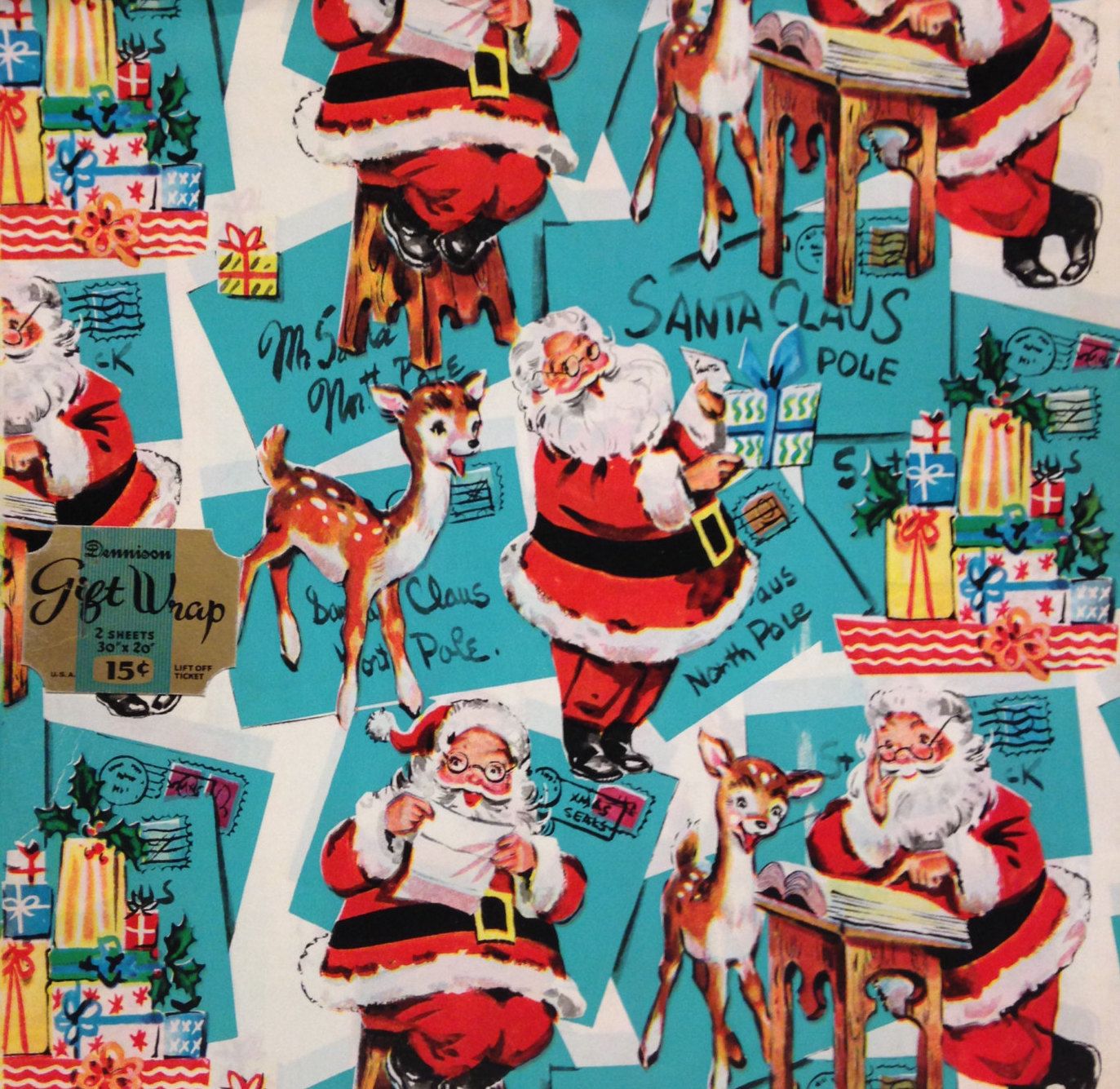 below:  My assessment:  quite stylish!  Useful for any denomination gift.   No obvious holiday references.  Today I’d use black ribbon.  Whacha think?  Back then: probably white or green. 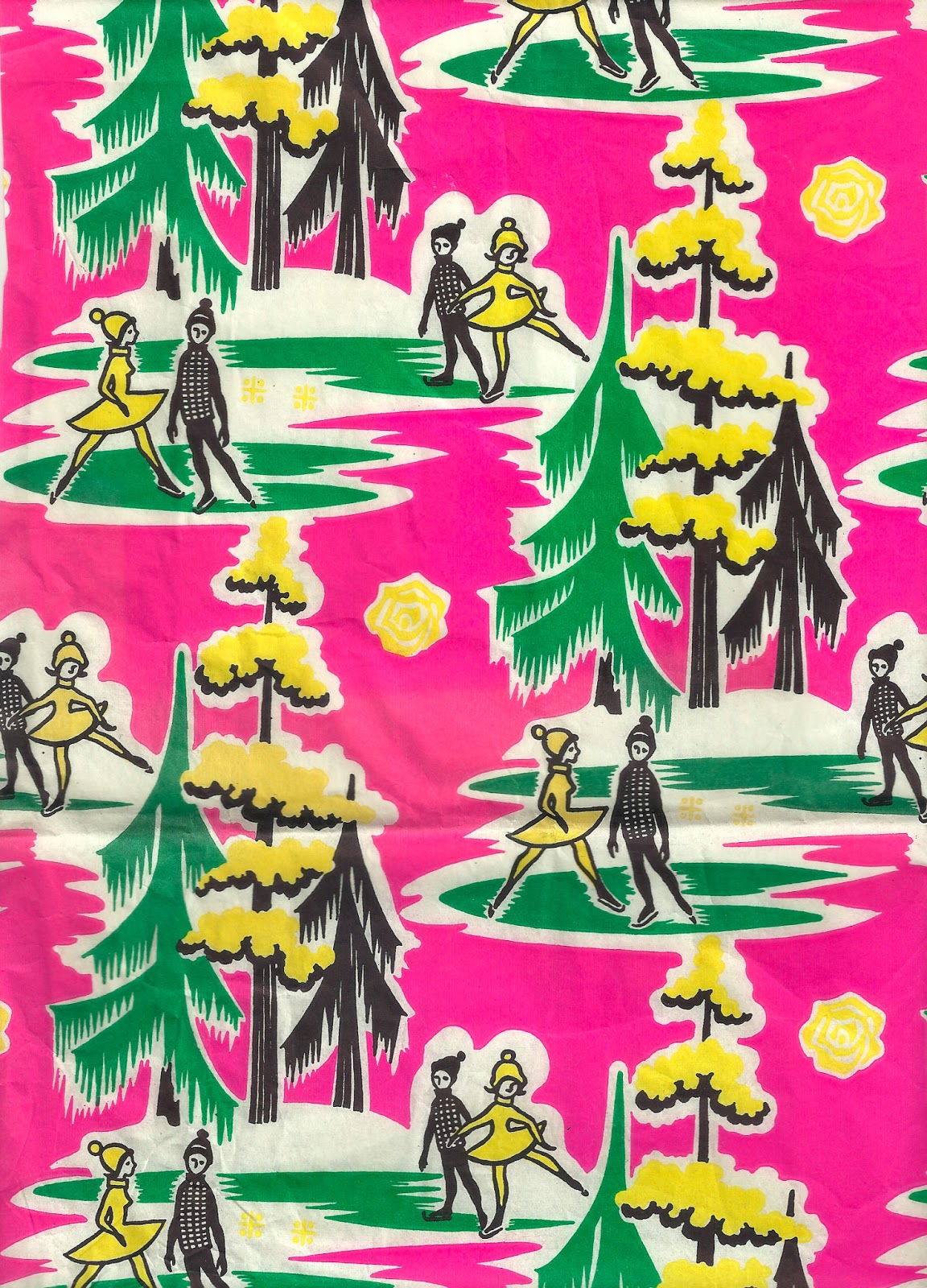 The Designated Wrapper in the Family

I was the Designated Wrapper at Xmas time in my family.  All the competition faded away when I wielded ribbon and the right paper! No one dared or dreamt of it. I also had my stash of small ornaments and strings of jingle bells to add to the ribbon.  Unbeatable.  And, I reveled in it!  Of course, the real truth was more complicated; the only real competition would have been from my brother, who was oblivious about wrapping gifts.  My mother was happy to have it off her hands and my Dad?  oblivious to.  Enter my bedroom at any time during December and witness a mess:  of wrapping paper, ribbons and gifts waiting to wrapped, all in a jumble on my bedroom floor.  I liked it that way.  If you didn’t like the mess, KEEP OUT!

Little Known Factoid:  Oh, Holy Night, sung by Johnny Mathis was my favorite carol.  It could bring me to tears.  Especially if I were in a weakened condition. 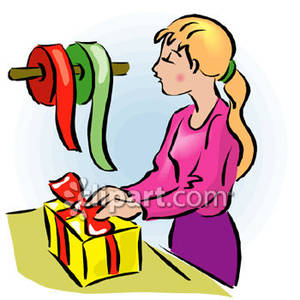 I was never this organized and never looked this cool.

I took my unofficial title seriously and would spend hours at the 5 & 10 finding the perfect papers.  I had to bridge Chanukah and Xmas, so this was a complicated task.  But I was up to it!  I browsed the 5 & 10 for “seasonal papers” and ones that had no religious significance that I  could sort out as needed.  .  In the 1950’s this could be a dizzying assortment of paper.  Solid glossy rolls of paper would almost always be a good choice and could be used other times of year, as well.  The selection of ribbon  would be important here.  Santa Claus themed paper was a no – no for Hanukah, of course.  Wintery themes could work for either culture, etc.  Cutesy was generally avoided (no matter the occasion).  I generally dislike the word “cute!”

Except when in Japan.

Cutesy paper always plentiful, but not useful for my purposes: 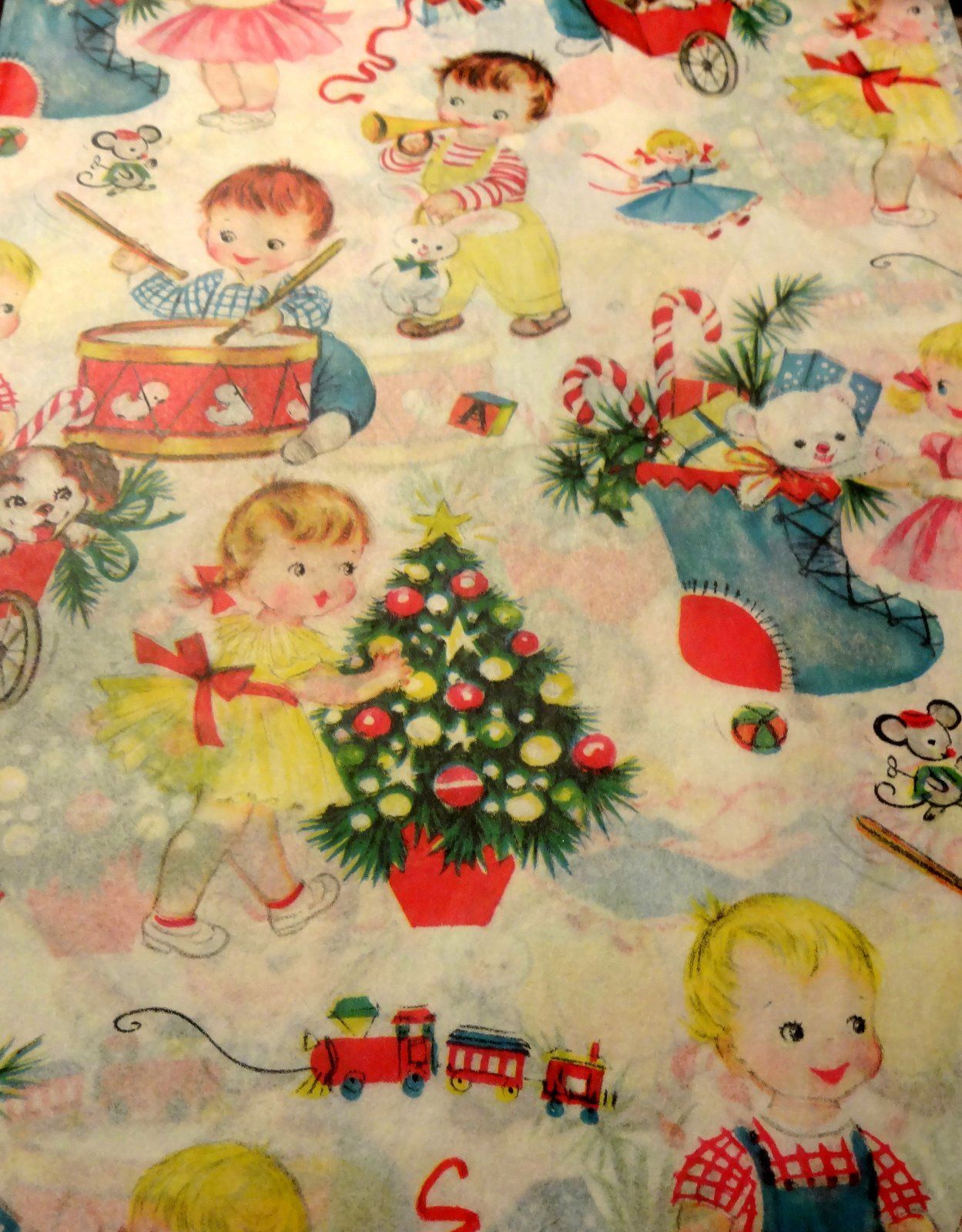 Invariably, in the weeks preceeding Christmas, a classmate would ask a group of us assembled classmates, “When are you putting up your tree?  We didn’t and don’t celebrate Christmas.  Which of course means we don’t have a Christmas tree,” I would timidly proclaim.   My declaration would be met with stunned silence.  Beyond unimaginable and dreadful for my classmates.  Talk about me just wanting the floor to open up.  Where do you go from there?  End of questioning.  The truth of the matter was, no matter what; this was not a holiday Jews could celebrate.  I was always an outsider looking in.  It could not be otherwise.  Being Jewish during the holiday season was always a balancing act.  How much to reveal? And when to just keep quiet?

L K F:  If my Mom and I were alone together in her car, she might sing O Come All Ye Faithful.  It was our secret.

Of course, I liked Christmas, but it was a complicated relationship, like so many in life. The parts that could be easily adapted to a secular Jewish life were ok.  ok, welcome!  But when it came to the obviously religious themes, those boundaries must be respected. I got very tired of being told by well – meaning but uninformed friends that Chanukah was the Jewish Xmas.  Wrong. wrong. wrong.  The only things they have in common, are being celebrated in the month of December and gift giving. Oh yes, there are candles on a menorah, but NOT in windows and unfortunately there’s no Xmas tree, although the idea of a Chanukah Bush floated around for a few years.

Some Jewish parents attempt to make their kids feel good about celebrating Chanukah for 8 days, vs. just the one day for Christmas.  But Christmas is an institution.  It’s got movies, carols, holiday specials and Christmas trees, and lot of uumph. Not to mention the hooplas around Santa.  No match!!  Being Jewish at this time of year was an example of classic APPROACH/AVOID.

We Jews like to help you celebrate, don’t get me wrong.  I myself loved  wrapping holiday gifts.  I still  like to do it, but my parents have been deceased for decades, so the load is decidedly smaller.  It’s ok.

One final question for everyone to grapple with:  Is there anything lovelier than the colored lights of Christmas decoration peeking through a newly fallen snow?  You know what I think!

Also, It’s good to remember, What doesn’t kill you, makes you stronger! 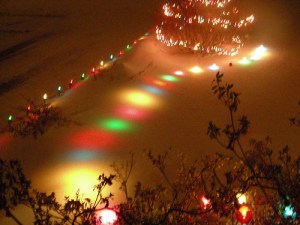