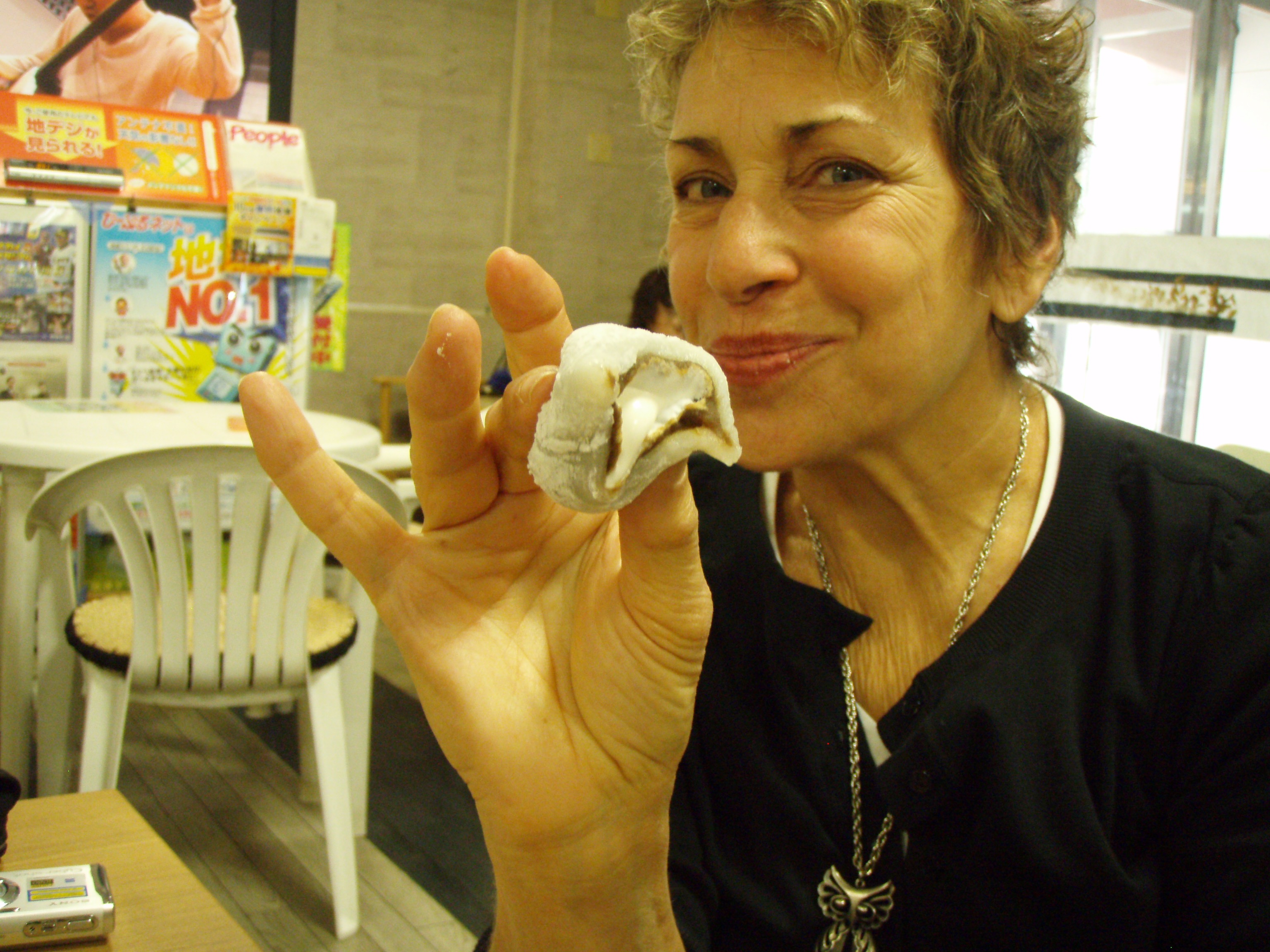 Is A Picture is Still Worth…?

Photography takes an instant out of time, altering life by holding it still. Dorothea Lange

We are living at a time when our lives are flooded with photographs, unlike any time that’s come before it.  The Iphone has made us all amateur photographers and social media has given us the venues to display our masterpieces anywhere and anytime we like, leading to the illusion that what we’re sharing has significant value.  It may or may not.

Today photography has become a global cacophony of freeze-frames. Millions of pictures are uploaded every minute. Correspondingly, everyone is a subject, and knows it—any day now we will be adding the unguarded moment to the endangered species list.  National Geographic

I started out with a Brownie camera, the first low quality, low cost black and white snapshot camera for the masses.

I only took pictures on special occasions. The few photos I still have from that period are  2″ black and white square box images of a young girl entering adolescence, indicating that someone else took them. No selfies then!  Looking at the images, I can recall the places they were taken, but almost nothing of myself at that time.  I know it’s me, but maybe only because I’ve seen the photos all my life?

When I was a young teen ager, I was thrilled to win an early Polaroid camera at a bingo game. You’d have thought I’d won the lottery, I was so excited. It was a heavy and bulky instrument, but it encouraged me to take many more photos, even though the pictures had to be coated and ultimately faded anyway.  Instant gratification is a powerful motivator.

When I began to travel to Japan in the 1980’s, I desperately wanted to record the images around me. Inspiration was everywhere. I’d return home with up to ten rolls of film, and rush to the drug store to have them developed.  Each new camera promised an easier time and a better photo. The number of print images I developed before digital came along, became overwhelming.

I never was interested in getting into the mechanics of photography, so when the iPhone became an increasingly capable partner in recording life as it passes by, I jumped on the bandwagon.  Now, I rarely use a camera.  Too lazy.

I have 13,704 photos on Iphoto, most of which are just parked. Out of these thousands, some do manage to stand out, by telling me something about our world, or something about myself, or some combination of the two.

I  think we’re probably as numbed by words as photos; it all contributes to the cacophony of too many talking heads, too many opinions, and too much nonsense.

Acknowledging  all this, I nevertheless thought it might be fun, as an alternative to writing every blog, to share photos that mean something to me at this point in my life.

It’s interesting to consider, what still resonates for me? Why?  What will remain of these life pixels after I’m gone?

I’m going to begin with some random photos of important couples in my life.  I’ll keep the chit chat to a minimum.

Below, is a photo of my maternal great grandmother, whom I never knew.  I wonder about  her life. If we could talk to each other, what would she tell me? My mom told me that as a child she’d have to go over to her house and stay with her during thunderstorms, because she was terrified of them. Just noticed, our curly hair must have come from her! 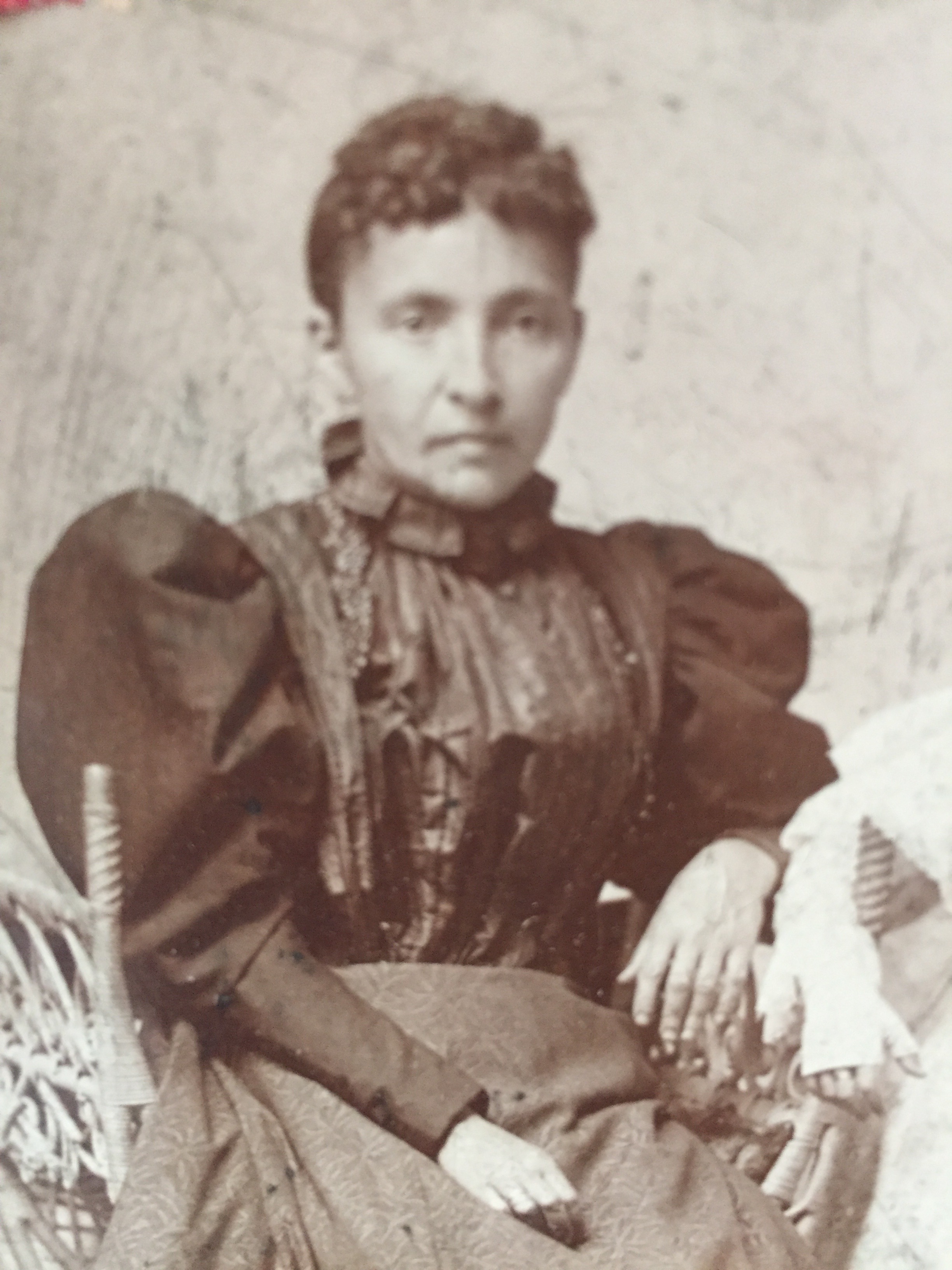 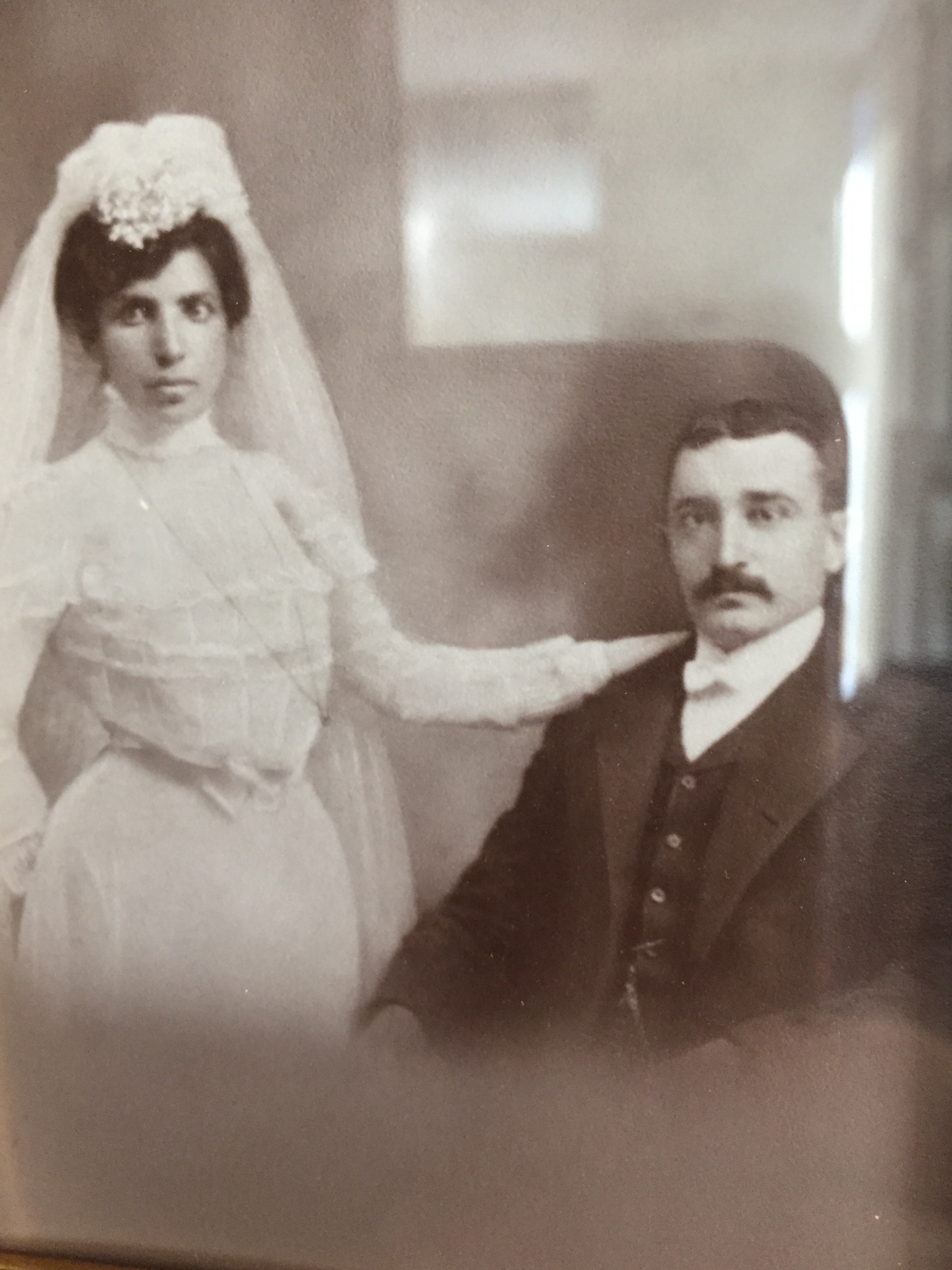 The wedding portrait of my maternal grandmother and grandfather.  She was in my life for the first 12 years of it.  I never knew my grandfather, although I know my mother adored him.  My grandmother was a seamstress, made her wedding dress and sewed all the clothes worn by her 7 children. She bears a striking resemblance to my mother and Amy Winehouse. 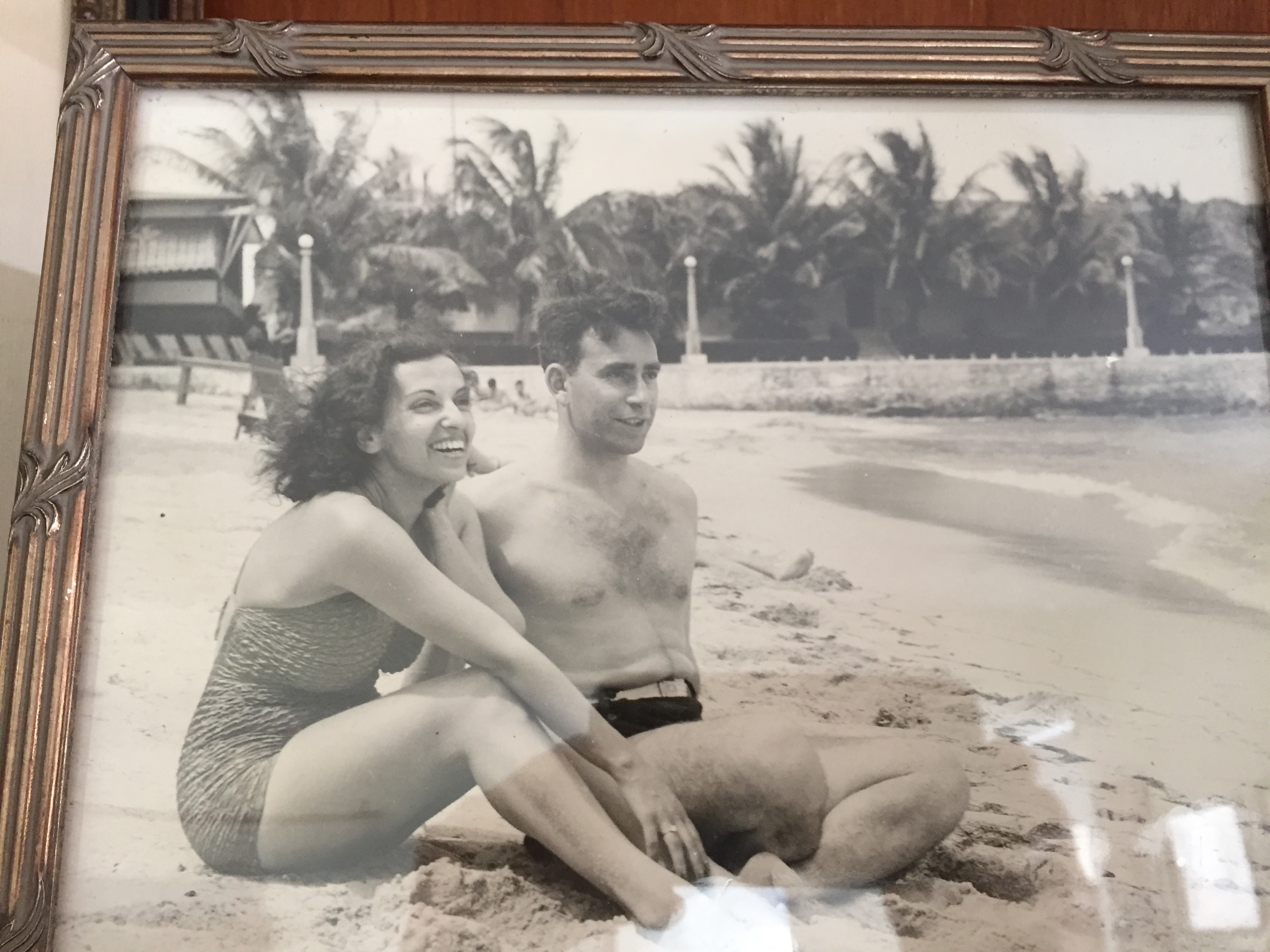 My Mom and Dad in Puerto Rico on their honeymoon in 1938. Other than this photo, I have no memory of them looking so youthful or quite so carefree! 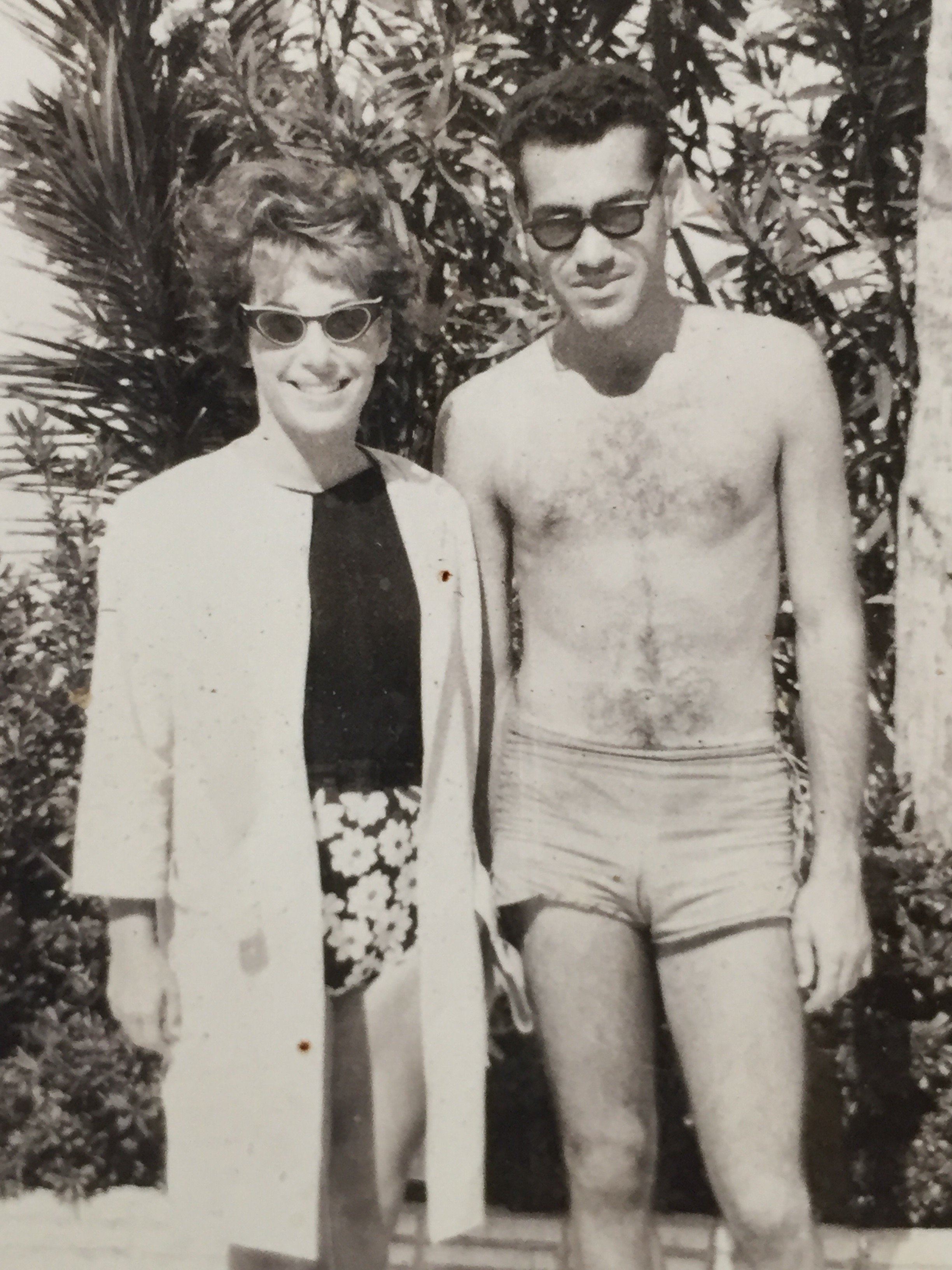 My husband and me, just before our engagement, Miami Beach Florida, 1963.  Looks like the beginning of the op art period, judging from my bathing suit, and my hair was still being teased, judging from the volume of it.  As for the sunglasses, wish I still had them.  Danny’s swimwear, is of course, timeless.  It’s now 53 years later.  Still love him! 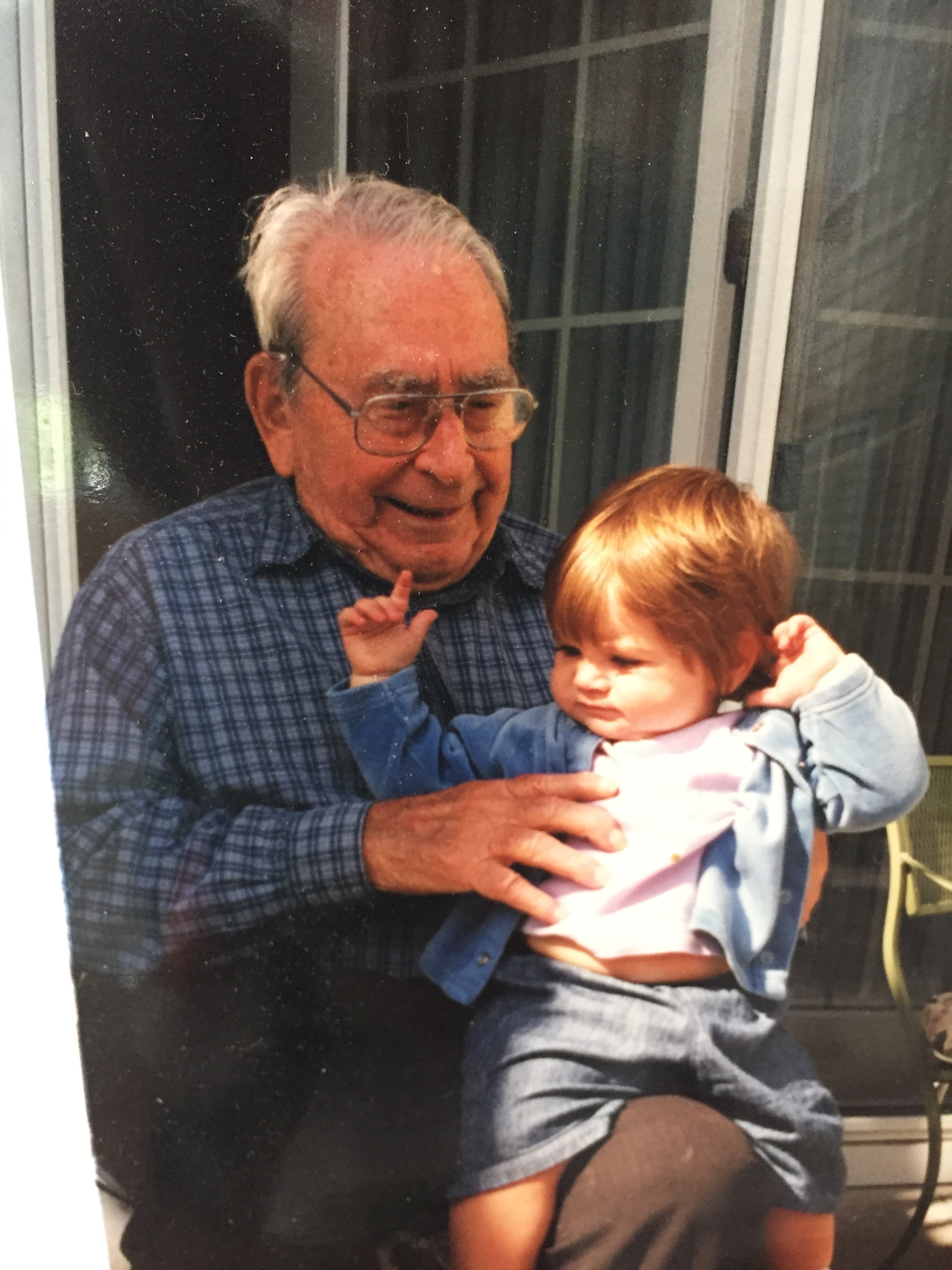 My Dad with his first great grandchild.  I remember being thrilled when he got to meet her, but saddened as well, because it was close to the end of his life.  He never got to meet my other grandkids, but I am grateful we had this moment.

“One should really use the camera as though tomorrow you’d be stricken blind.”

“A camera is a tool for learning how to see without a camera.”